Kelly Ripa loves nothing more than spending time with her family, and has a close bond with all three of her children.

The Live star is a doting mom to children Michael, Lola and Joaquin, who she shares with husband Mark Consuelos.

Over the summer, Kelly and Mark’s daughter Lola moved to London as part of her college program and is now facing an emotional week as she returns to her family for Christmas.

WATCH: Kelly Ripa welcomes famous new co-host on Live – who is it?

This will be extra special for the 21-year-old’s parents too, who have been missing not having her so close to home.

Lola moved to London from Brooklyn, where she had been living for the past few years.

Kelly and Mark’s oldest son Michael also lives in the borough, but often pops home to see his parents in Manhattan.

The couple’s youngest son Joaquin lives in Michigan, where he is enrolled at college, but is also set to come back to New York City for Christmas.

Kelly is incredibly open about her personal life and often shares stories about her husband and children.

MOST READ: What is wrong with Al Roker? The Today star’s alarming health battle revealed

During a past chat with Daily Mail, the TV host said of her children’s upbringing: “We want to raise productive people who are thoughtful and selfless.”

The actress added: “I wanted to raise good, caring, generous, thoughtful people who are professional, who are polite, who don’t expect the world handed to them.” 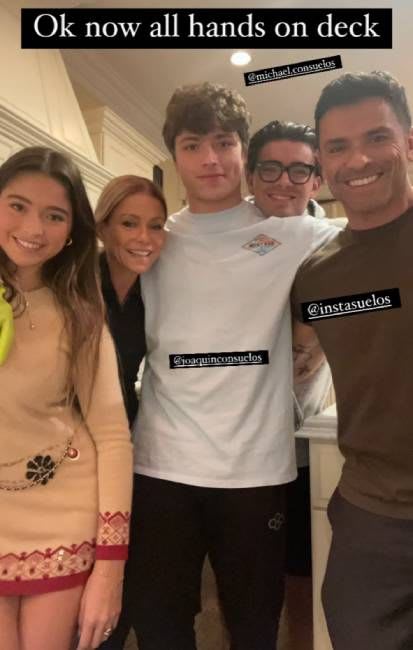 The family spent Thanksgiving together too

In her book, Live Wire, Kelly also talked about a conversation she had with her daughter about powering through when things get tough.

She detailed the well-documented drama that occurred during the early years of her working on the show, and her daughter was surprised to find out why her mom didn’t just quit.

All three of Kelly and Mark’s children have proved that they have strong work ethics and are ambitious in their own fields. While Michael is following in his parents’ footsteps as an actor, Lola is a talented singer, and Joaquin is a wrestler.