Adele and Rich Paul Hold Hands at an NFL Game

Adele and Rich Paul enjoyed a new sport for their latest date night.

The pop star and the sports agent were spotted enjoying an NFL game with a surprising plus one at SoFi stadium in Inglewood, outside of LA, last Thursday. The couple watched the Los Angeles Chargers take on the Kansas City Chiefs from a luxury box alongside Jay-Z, sans Beyoncé, as well as Paul’s friend and LeBron James’ business partner Maverick Carter.

In a pic from the event, seen here, the couple engage in some light PDA, holding hands as they watch the game. The “Easy on Me” singer wears a black top with large gold hoops and a black mask, while the agent dons a black bomber jacket.

The NFL game marked the couple’s first time being spotted at a football game. Their spectator sport of choice is usually basketball, with the Instagram-official pair making appearances courtside last season’s NBA finals in July and this season’s opening game in October.

Lately the “Hello” singer has been more open about her relationship with Paul, both in interviews and on social media. Last week she shouted out Paul’s sneaker collab with New Balance on Instagram, posting pics of herself wearing the shoes on her Instagram story.

She captioned a close up of the old-school sneaker, “Congratulations @richpaul,” along with a graphic reading “Amazing.” 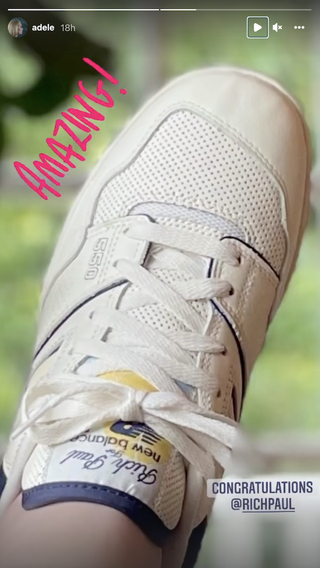