It looks like Amy Schumer has finally picked up on the buzz involving a midwest truck stop and a look-alike.

On June 10, Twitter got into a frenzy over a woman, named Amelia, who won a Monster Energy package from Celina 52 Truck Stop in Celina, Tenn. The truck stop’s Twitter account shared a photo (seen below) of Amelia with her prize, and people could not get over how much she resembled the comedian — or the hilarious sign in the background that read, “Stop pooping in our parking lot.”

“Literally no clue whether that’s a rando or actually Amy Schumer or shopped or viral marketing or whatever but that’s just a good tweet all around,” one viewer tweeted. “Amy schumer is trending because of that amazing truck stop post. i feel a sense of peace that it does all seem, in fact, real,” another satisfied Twitter user wrote. A third person said it was too good to be true. “Everything about the photo is basically designed to go viral. Amy Schumer lookalike (or photoshoped her face on to another model). … The poop sign. This is a marketing campaign designed to sell t-shirts from a non-existant truck stop, and nothing more.”

Well, Schumer eventually heard about the photo, but she seemed a bit confused when she addressed it. Drive on down to slide two to see what she had to say. 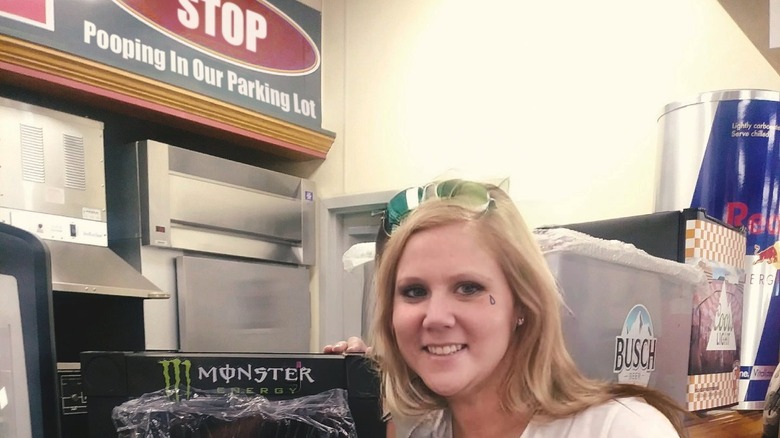