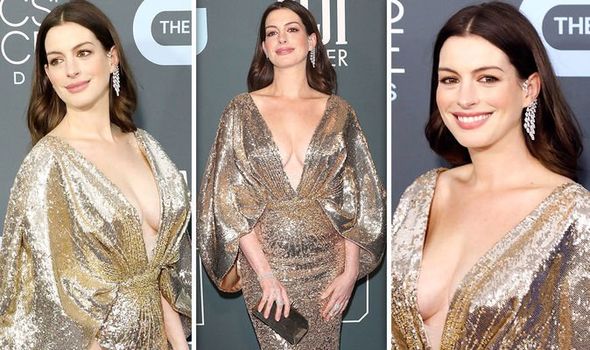 Anne Hathaway risked a wardrobe malfunction at the 25th annual Critics’ Choice Awards 2020 at Barker Hangar in Santa Monica, California. The film star made her red carpet return alongside husband Adam Shulman, weeks after they welcomed their second baby together.

The 37-year-old turned heads for all the right reasons as she opted for a striking, floor-length gold dress.

Wearing her dark tresses down in a glamorous wave, Anne’s ample assets were impossible to miss as she daringly went braless.

She looked dangerously close to spilling out due to the frock’s slashed neckline, that was cut to just above the navel.

The mother-of-two polished off her attire with a coordinated clutch bag and high heels, which could just be seen.

She also added some statement earrings that were dangly on one side, and a bracelet and rings.

Anne was seen arriving with her actor spouse Adam, 38, who she wed back in 2012, and who opted for a classic tuxedo for the occasion.

The Princess Diaries beauty was nominated for Best Actress in a Limited Series or Movie Made for Television for her role in Amazon series, Modern Love.

However, the gong went to Michelle Williams for Fosse/Verdo, who also beat off stiff competition from the likes of The Act’s Joey King and Unbelievable star Kaitlyn Dever.

Anne did take to the stage to present the award for Best Actor, which was awarded to Joaquin Phoenix for his leading role in the Joker.

It comes just days after the 45-year-old picked up the same honour at the Golden Globes Awards, presented by Ricky Gervais.

The couple were spotted on a family day out with a baby carrier, which had a blanket thrown over it.

She revealed she was expecting in July in a brutally honest Instagram update with her 16.4 million followers.

“⁣All kidding aside, for everyone going through infertility and conception hell, please know it was not a straight line to either of my pregnancies. Sending you extra love.”

Her words were accompanied by a selfie as she stood in what appeared to be her home, while her growing tum protruded out of a simple white vest.

Just days later she shared a snapshot of the inside of a garment, which had a cute label that read: “Anne + 1.”

She added: “@brandonmaxwell, as if it wasn’t enough you custom-made me and the bump a knockout dress, you put this tag in it.