In case you were wondering how Ariana Grande feels about Taylor Swift’s new music video, I’m here to tell you that she f*cking loves it! Are you surprised? Nah, me neither. But Ariana Grande’s reaction to Taylor Swift’s "You Need To Calm Down" video is straight-up amazing, and y’all need to see it.

OK, so T. Swizzle dropped the MV for her brand new song "You Need To Calm Down" on June 17. It’s the second single from Swift’s upcoming album, Lover — the first from the album was "ME!" — it’s a glorious pride anthem, and it’s pretty freaking fabulous. I mean, not only is the video packed with celeb cameos — Katy Perry! Ellen DeGeneres! Laverne Cox! Ryan Reynolds! —  but the easter egg-filled masterpiece also features a bunch of seriously on-point drag queens dressed up as various pop stars — including Tatianna from RuPaul’s Drag Race, who was serving up serious "No More Tears Left To Cry" vibes in a high pony/pink mini dress look that was identical to the one Grande wore during a May 2018 appearance on The Tonight Show With Jimmy Fallon.

And here’s Tatianna (far left) alongside Lady Gaga, Adele, Cardi B, Swift, Beyoncé, Katy Perry, and Nicki Minaj, who turn up on stage in "You Need To Calm Down" as participants in a Pop Queen Pageant, where they all eventually take home the crown: 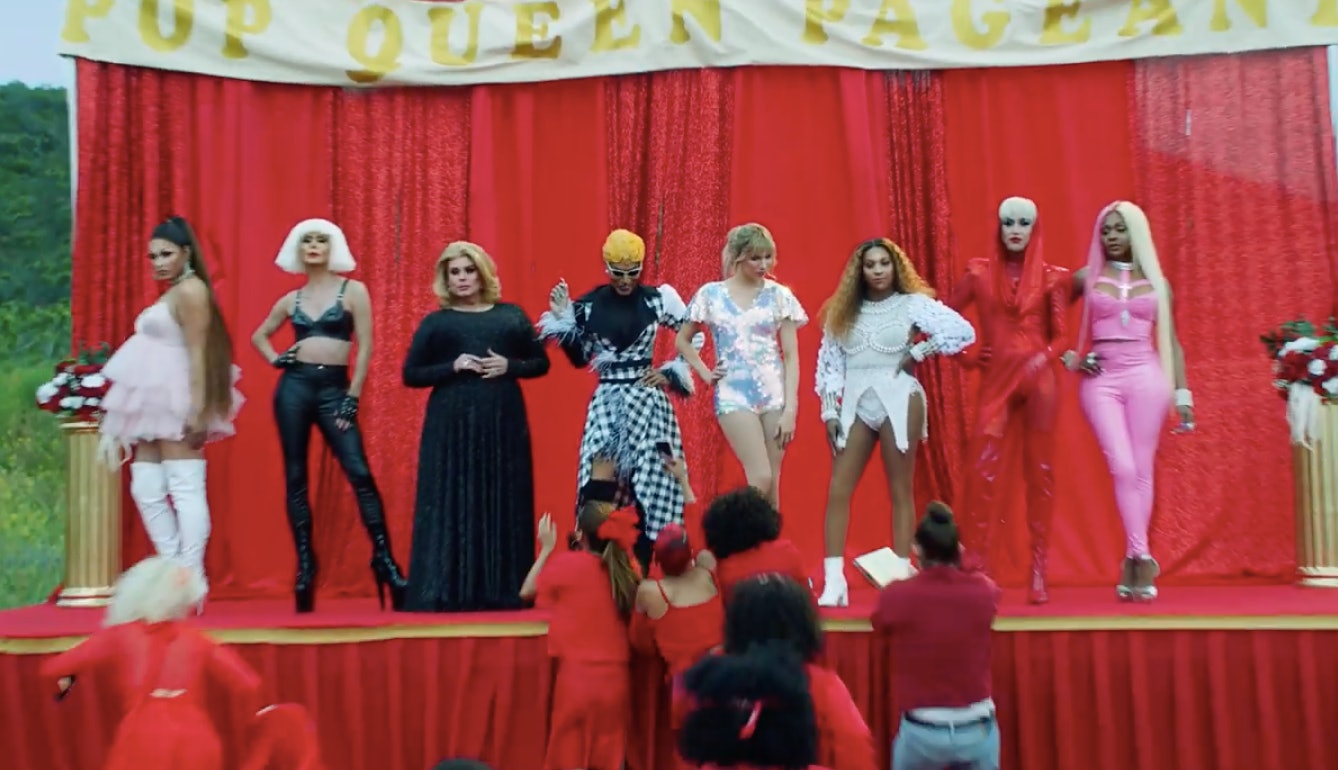 Are Pop Queen Pageants a real thing? Because if not, they totally need to be.

Anyhoo, Grande hit up her Instagram story on June 18 to give Tatianna a well-deserved shoutout and share a behind-the-scenes pic of the RuPaul’s Drag Race star on the set of Swift’s video — which, by the way, also featured a quick guest appearance by RuPaul.

"Thank you for having me in your video I was amazing @taylorswift," Grande joked in the caption. "JK @tatiannagram you f*cking killed it, beauty. Love you & am honored." 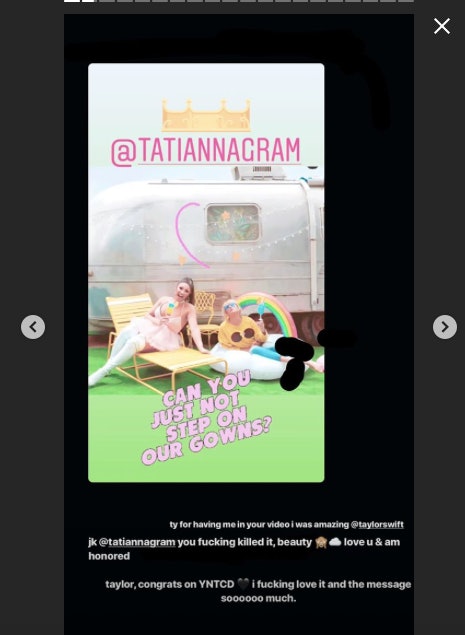 Grande also took a minute to praise Swift on her new song and the importance of the meaning behind it. "Congrats on YNTCD," she wrote. "I f*cking love it and the message soooooo much."

Have y’all seen the video yet?

There’s just so much to unpack here, from Swift’s reconciliation with Perry, to Ciara marrying gay couple Jesse Tyler Ferguson and Justin Mikita, to the song’s message of support for the LGBTQ+ community — not to mention all the cameos from several of the community’s most famous faces, including: Billy Porter, Ellen DeGeneres, Adam Lambert, Tan France, Antoni Porowski, Jonathan Van Ness, Adam Rippon, and Todrick Hall.

The video then ends with a message for viewers to sign a petition calling for passage of the Equality Act, which would ban discrimination based on sexual orientation and identity.

"Let’s show our pride by demanding that, on a national level, our laws truly treat all of our citizens equally," the last shot of the video read. "Please sign my petition for Senate support of the Equality Act on Change.org."