Avatar: The Way Of Water earned $434.5 million during its global debut, according to studio estimates on Sunday, after its director James Cameron said it needs to earn $2 billion to break even.

The sequel earned $134 million from North American theaters and $300.5 million internationally for a $434.5 million global debut.

It tied with ‘The Batman’ as the fourth highest domestic debut of the year, behind ‘Doctor Strange in the Multiverse of Madness’ ($187.4 million May), ‘Black Panther: Wakanda Forever,’ ($181 million in November) and ‘Thor: Love and Thunder’ ($144.2 million in July). 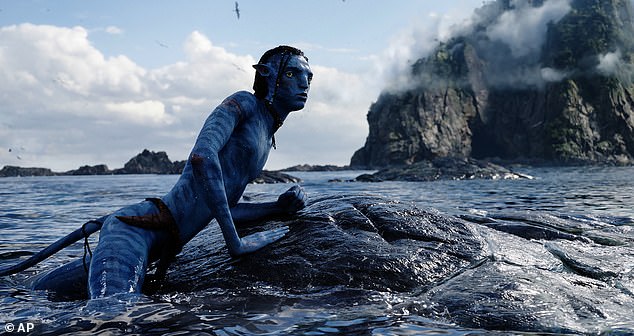 Big splash: Avatar: The Way Of Water earned $434.5 million during its global debut, according to studio estimates on Sunday, after its director James Cameron said it needs to earn $2 billion to break even

Expectations were enormous for ‘Avatar 2,’ which carried a reported price tag of over $350 million, the pressure of following up the highest grossing film of all time (thanks in part to various re-releases) over a decade later and the daunting task of propping up an exhibition business that´s still far from normal.

Everything ‘Avatar’ is oversized, though: the Na´vi characters, the runtime (a staggering three hours and 12 minutes), the technical advancements and the release strategy from 20th Century Studios and The Walt Disney Co.

Going into the weekend many were expecting a domestic debut of at least $150 million. Some even said $175 or higher, but tracking has also not been as reliable a metric during the pandemic.

Disney saw early that ‘The Way of Water’ was going to be a different kind of beast when they looked at pre-sales. For a normal, spoiler-heavy movie like many Marvel offerings, post-opening weekend sales are usually around 5%. For ‘The Way of Water,’ they were at 20%. In other words, the company knew that tracking was overinflated. 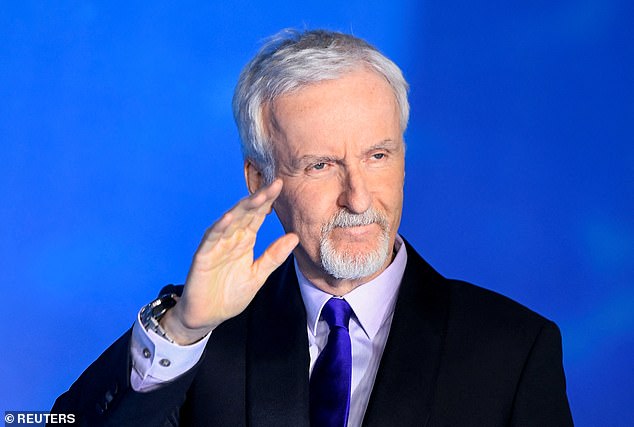 Break even: James Cameron, shown earlier this month in London, has said that Avatar 2 needs to make $2 billion to break even

‘We´ve got a terrific movie that is playing across all demographics and (has) terrific word of mouth,’ said Tony Chambers, the Walt Disney Co.´s executive vice president for theatrical distribution. ‘We´ve got the screens and we´ve got a clear run. This isn´t about the opening day or the opening weekend. This is about the entire run.’

The film began its international rollout on Wednesday and debuted in North America on Thursday evening. Domestically, ‘Avatar: The Way of Water’ was released in 4,202 theaters on over 12,000 screens, 400 of which were IMAX 3D. The studio and filmmakers bet big on the draw, and higher prices, of the 3D format and premium large screens.

By the end of Friday, ‘Avatar: The Way of Water’ had already earned $53 million in the U.S. and Canada and $180.1 million globally, aided by a China release – the first major Hollywood release in the country since ‘Minions: The Rise of Gru’ in August. It blows ‘Avatar´s’ $26.7 million first day in 2009 out of the water, though that didn´t include Thursday previews. 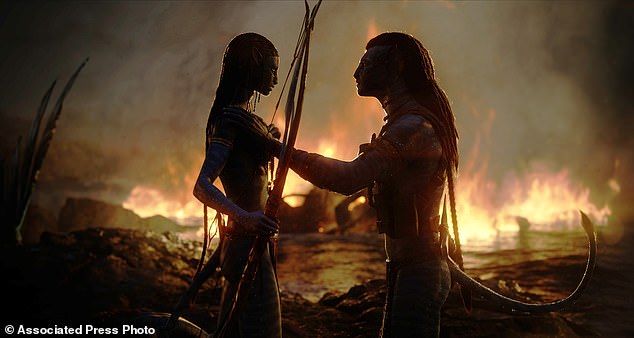 Highly anticipated: This image released by 20th Century Studios shows Zoe Saldana, as Neytiri, left, and Sam Worthington, as Jake Sully, in a scene from the highly anticipated sequel ‘Avatar: The Way of Water’

Over $48.8 million of the global total came from IMAX screens alone (1,543 in 80 markets), the company’s second biggest weekend. 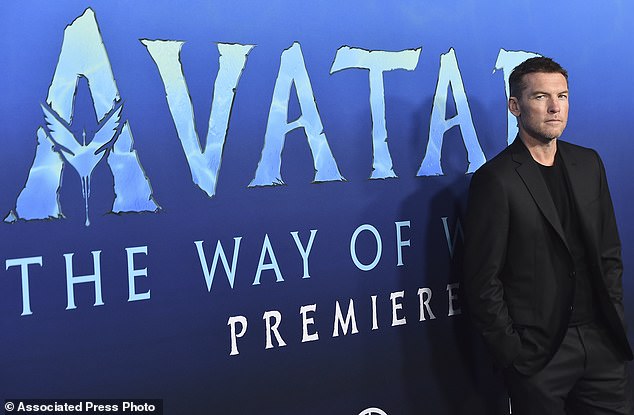 Film star: Sam Worthington is shown arriving at the U.S. premiere of ‘Avatar: The Way of Water’ earlier this month in Los Angeles

‘As excited as we are about these early results, we anticipate a long and successful run for `Avatar: The Way of Water,´’ said Rich Gelfond, CEO of IMAX, in a statement.

As with many ambitious Cameron projects, from ‘Titanic’ to the first ‘Avatar,’ nerves were high for the costly sequel, one of the most expensive of all time, which began production five years ago. It faced repeated delays and weathered The Walt Disney Co´s acquisition of 21st Century Fox in 2019. It´s also one of four ‘Avatar’ sequels Cameron had in mind. Filming on the third movie, which shot simultaneously with ‘The Way of Water,’ is done, with an expected release in December 2024.

In the 13 years since the first film, ‘Avatar’ has also been the butt of jokes for the perception that the biggest movie of all time, one that has made nearly $3 billion, has left a relatively minor footprint in the culture. But even so, critics have largely been on board with ‘The Way of Water,’ not just for the visuals but also for improving on the story of the first. It holds a 78% positive rating from critics on Rotten Tomatoes. 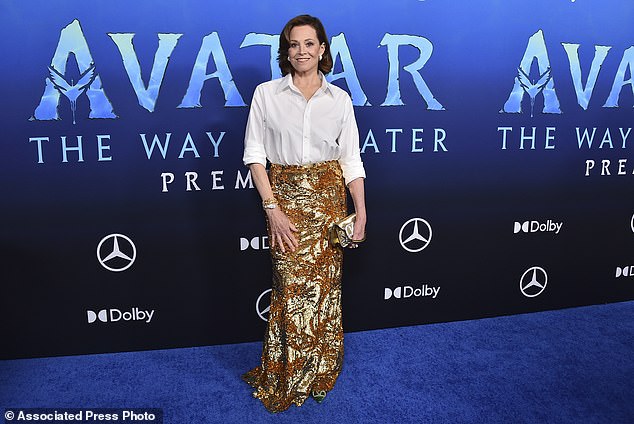 Fan favorite: Sigourney Weaver who also stars in Avatar 2 is shown at the LA premiere

The question of whether ‘Avatar 2’ will earn enough is a complicated one with varied answers. Is it enough for exhibitors, who´ve had several significant hits this year, including ‘Top Gun: Maverick,’ ‘Black Panther 2’ and ‘Doctor Strange 2,’ but are still hurting? Is it enough to justify starting production on fourth and fifth movies? Is it enough for the business as a whole, which is looking at a domestic year-end total in the $8 billion range, as opposed to a pre-pandemic normal of $11 billion?

But like the critics shouting ‘never doubt James Cameron,’ the studio and analysts are singing a similar tune.

‘Avatar: The Way of Water’ has the benefit of a holiday corridor that is, relatively speaking, lacking in major blockbuster-style movies. Next week sees the debut of Damien Chazelle´s ‘Babylon’ and the family-friendly ‘Puss in Boots: The Last Wish’ but there are no comparable blockbusters until ‘Ant-Man and the Wasp: Quantumania’ in February. The hope is that audiences will continue seeking ‘Avatar 2’ out for weeks and months to come, similar to the first movie.

‘Historically James Cameron´s movies are about the long haul, not the opening weekend,’ said Paul Dergarabedian, the senior media analyst for Comscore. ”Avatar’ is going to develop its box office over time. It’s about where it will end up months from now.’ 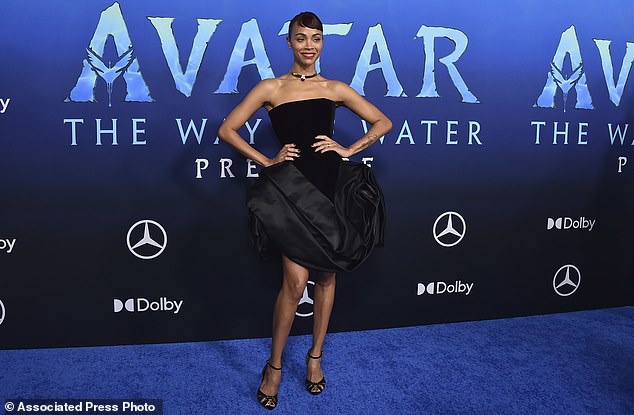 Leading lady: Zoe Saldana is shown at the U.S. premiere of ‘Avatar: The Way of Water’ earlier this month in Los Angeles