Home » Celebrities » ‘Basketball Wives’ star Jackie Christie on dealing with NBA groupies: ‘It is tough for some’

‘Basketball Wives’ star Jackie Christie on dealing with NBA groupies: ‘It is tough for some’ 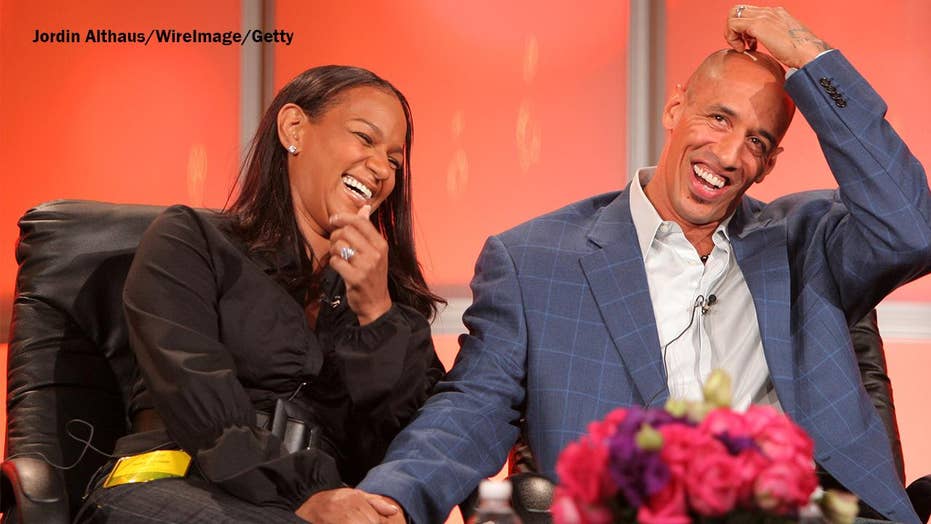 ‘Basketball Wives’ star Jackie Christie gets candid on the new season of the popular VH1 reality TV series, the secret behind her lasting marriage to retired NBA player Doug Christie and dealing with groups.

After over 20 years of marriage, Jackie Christie and her husband, retired NBA player Doug Christie, know how to keep the romance alive.

The 49-year-old businesswoman is the star if VH1’s reality TV series “Basketball Wives,” which chronicles the lives of women married to professional athletes. And things often get so explosive on set, rumors were even swirling earlier this year that Christie was allegedly leaving the series after a physical altercation with a co-star.

Despite all the drama, Christie insisted her main focus is on her marriage, even when cameras stop rolling.

Fox News spoke to Christie about whether she’s leaving “Basketball Wives,” about making her marriage to Doug work and how she copes with groupies.

Fox News: In April of this year, reports claimed you were leaving “Basketball Wives” after an altercation. Is this your last season?
Jackie Christie: No, it won't be my last season on this show, for sure. Everything's good. And you know, I've been here since Season 1. We're in Season 8 now. And you know, I wouldn't leave it. I think this is my baby, so I'm gonna stay here and take care of it.

Fox News: Speaking of babies, how are you coping with empty nest syndrome?
Christie: You know, it's an exciting time. It's awesome. [My son] Dougie is going away to school. This is big. We've always been an entrepreneurial family, a business-oriented family. You know, I've been writing books all through his childhood and my kids' childhood, and my husband's been playing in the NBA. Now he's commentating for the NBA. And we've just had always been a busy family.

Fox News: With your husband Doug Christie being retired from the NBA, you two must have more time than ever for each other. How do you keep that romantic spark alive?
Christie: Communication. We are each other's biggest fans, lovers… best friends. We definitely keep the respect there as well. If you have communication in your relationship, you can make it through anything.

Those players have to be on the road [and are] gone quite a bit. So you're going to have to deal with that situation unless you can do like I [what] did and travel with them. There are different situations. You got to deal with other people. Everybody wants a piece of that man, so you have to be willing to share in some way. So it's a lot of different things. That's one thing it takes to make it as a basketball wife. And then you know, to have that long lasting relationship, you just gotta believe in yourself and have communication.

Fox News: How do you cope with groupies?
Christie: You know what? People say that a lot, and I just feel like I've never really focused on anything other than the fact that I am a blessed woman [who] has found her knight in shining armor, and my husband, we've made beautiful children. My mom was able to retire, and for 19 years, come and live with us and relax and travel the world. And we could just be a family, and I could help so many people in foundations and philanthropy.

So, I focused on all of that, versus the women that tend to sometimes put themselves in a position or chase these players. So, you know, it is tough and difficult for some, but for me, that wasn't my focus and it still isn't.

Fox News: What’s a common misconception you feel people still have about “Basketball Wives,” and what's the reality?
Christie: I think one of the common misconceptions people still have about "Basketball Wives" is that all we do is fight and argue. And the reality is no, especially with somebody like myself. I'm the matriarch or one of the matriarchs of the show. And I tend to try to lead by example with these ladies. And I always try to be the heart and soul and bring everybody back together, because, at the end of the day, families are dysfunctional sometimes, and families fight sometimes.

And I try to make sure that the ladies understand that, at the end of the day, we are family. We are all in the same walk of life. We all love a professional athlete, a basketball player to be exact. And we have a lot in common. On top of that, we have real friendships. So, that's what I think one of the biggest misconceptions is. And that's the reality of it. So, for us, it's just like the next step, the next phase. We're moving right along. We're excited about it.

Fox News: How much of the show is real?
Christie: Every bit of it is real. For sure. It's our reality. I will say that a lot of people feel like it's scripted or it's fake. And it's this and that. Being in it, you almost wish it was, but it's not. You don't know what to expect. You can't predict what's going to happen. It is what it is. You know, you show up, you film, and it's anybody's guess.

Fox News: Were there any scenes or moments that you regret filming?
Christie: There was probably about 20 of them I just did, but you can't change it. When it's put on camera, it's on camera. You can't go and ask for it to be removed. You can't go have a conversation with production and say, "You know what? I really don't like the way I said that, or I don't like that I used profanity." It is what it is. You don't even waste your time and go and ask. And in fact, the more you ask, the more it's going to be put on there.

Fox News: How has your relationship with the other girls changed since all of you agreed to have your lives captured by the cameras?
Christie:  I would say mine has pretty much remained intact because I'm very transparent, and what you see is what you get. But I will say some of the women, it does affect them, with the cameras rolling and things that happen, and they take it sometimes too far. So it's affected some friendships and there are friendships that have been lost.

Fox News: Late last year, you were very candid about your childhood. And how important was it for you to address your past in the series?
Christie: It was so integral for me to do that. I wanted everybody to understand, because a lot of these young ladies and just women in general, all ages and from all walks of life, really look up to us. And they want … You know, a lot of them aspire to be like us and live this glamorous life, and I wanted them to understand, it isn't always easy and it hasn't always been easy. And for me, particularly. And I just always want to share with my fans more of me.

When you're on an ensemble cast, only small parts of your story is really being told. And so, I wanted to share that, yes, I've been in foster care. I love my foster family. There have been situations before foster care where I was in receiving homes in different situations, and those experiences weren't so good. But I think it all helped me grow, and become a better woman, and a better person, and be able to let go of some of the pain that I experienced in my past.