George Clooney whips out his mobile and begins tapping away feverishly. ‘Here’s my biggest problem in life,’ he says gravely, handing over the phone. On the screen is a small girl in a swimsuit. ‘That’s my daughter, Ella.’

The four-year-old is adorable, and bears a striking resemblance to her mother, the legal advocate Amal. She also happens to be a twin. But Clooney’s not worried about her brother, Alexander.

‘Boys at this age are easy,’ he says, dismissively. ‘Give ’em a stick and they start banging on things. They’re fine.’

But daughters? Daughters are a mystery. ‘Ella woke up this morning with a sad face,’ he tells me. ‘I said: “Are you OK, Ella?” It turns out that her doll was missing a shoe. It was a very tragic morning for us and believe me, all you want in life is to find that shoe.’ 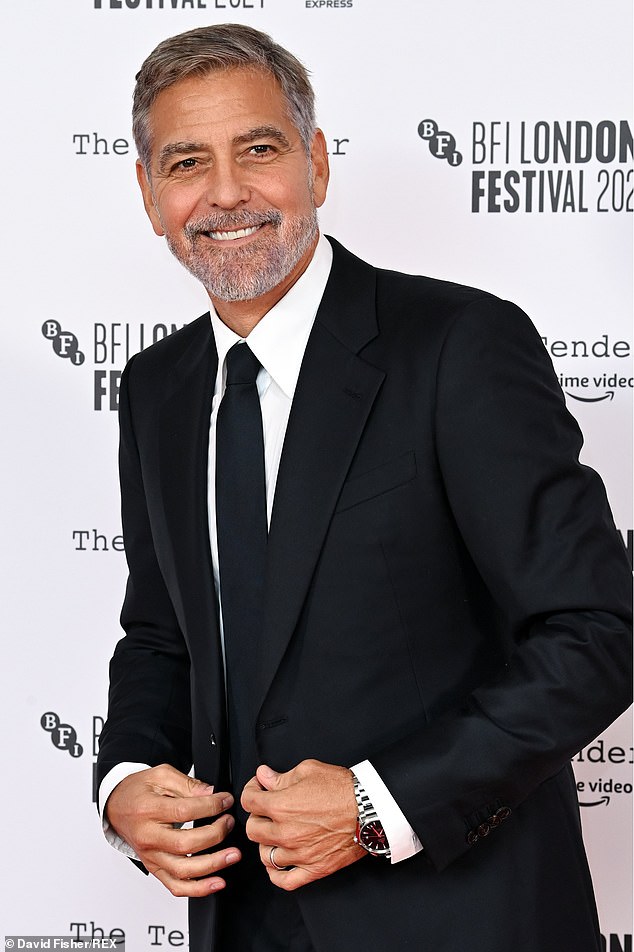 We’re seated outside his suite at the Haymarket Hotel, on a spacious terrace so we don’t have to wear masks — though we’ve both been tested for you know what. (These days, each time I’m to interview a major star, the studios arrange for a nurse from an outfit called Your Doctor to visit my home of a morning, to give me a Covid test. What must the neighbours think?!)

And kids are on our mind, because we’ve been discussing the filmmaker’s latest movie, The Tender Bar. The picture, which he directed, is based on a memoir by American Pulitzer-prize winning journalist J.R. Moehringer.

It’s the story of how he and his mother (Lily Rabe) moved to the North Shore of Long Island when he was ten, to live with his grandparents and bar-owning Uncle Charlie, played with revitalised energy by Ben Affleck.

The denizens of the Dickens bar in Manhasset were a rough and ready bunch: p***heads, but scholars all. Clooney likens it to a mash-up of The Sopranos and Dead Poets Society.

Uncle Charlie becomes a father figure to J.R. (played at aged ten and in his college years by Daniel Ranieri and Tye Sheridan); and the regulars at the Dickens become his pals, helping him with his homework, joking about literature and playing word games. 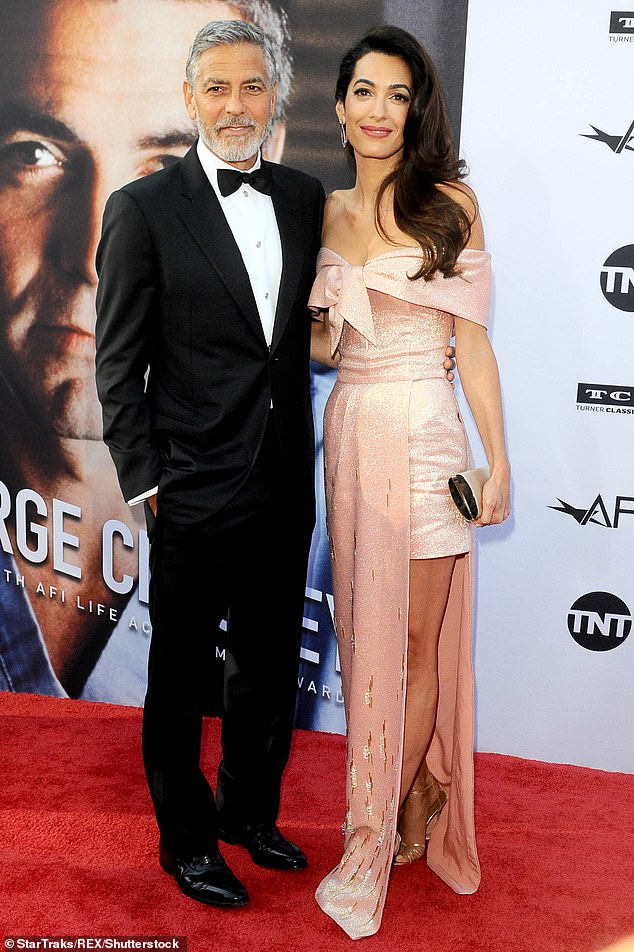 George Clooney whips out his mobile and begins tapping away feverishly. ‘Here’s my biggest problem in life,’ he says gravely, handing over the phone. On the screen is a small girl in a swimsuit. ‘That’s my daughter, Ella.’ The four-year-old is adorable, and bears a striking resemblance to her mother, the legal advocate Amal (right)

Would Clooney let his twins into a bar, I wonder?

‘If my kids aren’t able to handle themselves in situations that they’re less comfortable with, I think we would have failed them as parents,’ he says, firmly.

‘If you dropped my kids off at a place like the Tender Bar, they’d sit and ask questions about these guys and their families, I would hope. Ask people questions. It’s amazing what you can learn.’

Clooney tells me he enjoyed being stuck at home in LA with his family at the height of the pandemic. ‘They weren’t old enough that I had to re-learn trigonometry,’ he jokes of the twins. He boasts that at one point he was doing ‘six loads of laundry a day — and I was doing the food, because my wife doesn’t cook’.

The actor is a handy man — a legacy of the lean years before he became famous. ‘I was broke a long time,’ he says; eking out a living doing odd jobs: selling ladies’ shoes, cutting tobacco for three dollars an hour, working as a carpenter and decorator.

Speaking of being down and out in Hollywood, what about Affleck? On the way up again, after his acting career took a dive several years ago. ‘You go where people are offering you work,’ he says of his old friend, who directed Oscar-winning Argo for the production company run by Clooney and his business partner Grant Heslov.

Following Good Will Hunting, which earned him and Matt Damon a screenwriting Academy Award, Affleck appeared in a lot of dross: Armageddon, Reindeer Games, Pearl Harbor and Gigi (with Jennifer Lopez).

But Affleck was still effective behind the camera, directing several fine movies such as the aforementioned Argo, The Town and Gone Baby, Gone. ‘In doing those, he rediscovered acting,’ Clooney suggests. 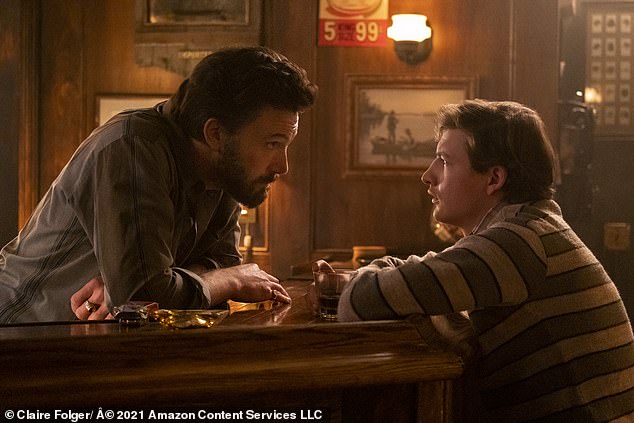 Speaking of being down and out in Hollywood, what about Affleck (left)? On the way up again, after his acting career took a dive several years ago

He and Heslov sent Affleck the screenplay by William Monahan, with the warning that ‘this isn’t a film you get paid on’.

Affleck sent back a long email, explaining why he was going to do it, saying he didn’t care about the money. ‘And he was right! He doesn’t get offered parts like this. He has also aged into it appropriately, don’t you think?’

Indeed I do. The actor is a pleasure to watch; and it’s clear that this is no phoned-in performance. Even so, the thought crossed my mind that women in showbusiness rarely get the same opportunity. Affleck is 49 — an age when a lot of actresses are told their careers are over.

Clooney leans forward. ‘I think that was because, for a long time, the people who were hiring them were men who’d probably gone through their first divorce and were now remarrying a 30-year-old woman.’

He notes that in the 1940s and 1950s, eight of the top ten box-office stars were women. We both start rattling off the names: Bette Davis, Katharine Hepburn, Barbara Stanwyck . . . 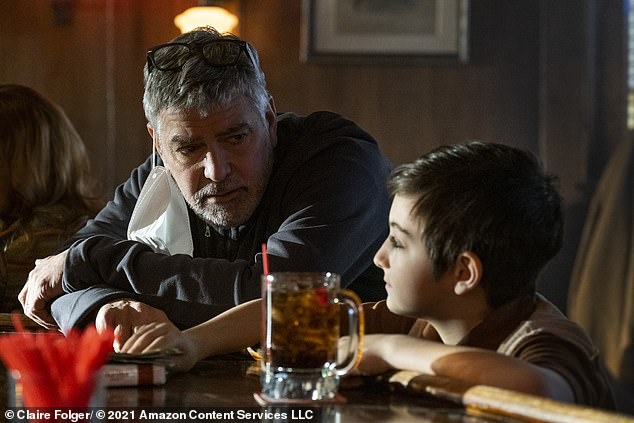 We’ve been discussing the filmmaker’s latest movie, The Tender Bar. The picture, which he directed, is based on a memoir by American Pulitzer-prize winning journalist J.R. Moehringer

‘They were huge stars, and got to work well into the Meryl Streep kind of age.’ (I’m only quoting what he said, Meryl!) ‘And then all of a sudden it was like you turned 40 and your career was over.’

Mercifully that’s changing, partly because the lines have blurred between television and film. ‘You see Nicole (Kidman) doing really interesting limited series,’ he says, by way of example.

He then slams as ‘pretty ridiculous’ the practice of aged male stars making movies with female leads half their age. ‘I haven’t done many romantic films, but usually I was working with someone age appropriate,’ he says, mentioning Michelle Pfeiffer (38 to his 35 when they shot One Fine Day in 1996) and Catherine Zeta Jones in Ocean’s Twelve (‘she was a little bit younger than me’ . . . 35 to Clooney’s 43 when that one was made in 2004).

His flow on gender fairness is interrupted by Heslov, joining us to discuss their array of future productions including Ticket To Paradise, which he has just started shooting for Working Title in Australia with Julia Roberts (an age-appropriate 54). Oh, and in the film, they have a daughter. Just to keep George on his toes.