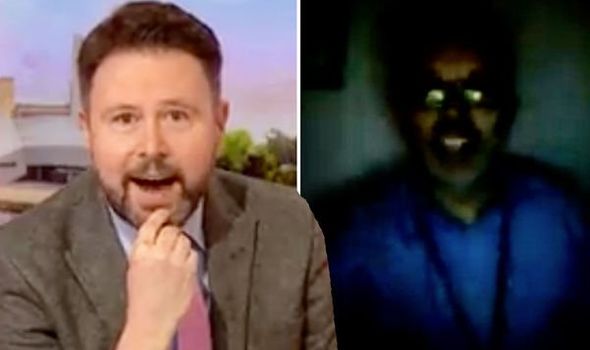 Jon Kay, 52, was left startled when BBC Breakfast guest Jim Cardwell’s lighting went out live on television, as they discussed restoring supplies after Storm Arwen. The badly-timed moment saw their guest sitting in the dark for a few seconds before he scurried off to sort out the issue.

Jim was telling Jon how Storm Arwen had affected over 240,000 people’s energy supplies, particularly those in the north of England.

As he continued to speak, the guest’s lighting unexpectedly cut out leaving Jon and Naga Munchetty perplexed.

“Excuse me a minute,” Jim said as he rushed off to sort the issue.

“I don’t believe it,” the presenter replied, as his co-star Naga could be heard laughing.

The guest returned to his seat with his lights back on within seconds, as he apologised for the mishap.

“Please tell me that wasn’t a power cut?” Jon laughed.

Jim explained: “The irony Jon is that that is the energy efficient lighting turning off.

“So, badly timed, I apologise for that.”

The presenter shared the moment on his Twitter page this morning, writing: “Oh dear.

“When you’re talking to a power company about restoring supplies.”

BBC Breakfast viewers were quick to comment on the humorous moment.

Louise wrote: “That was the ‘highlight’ of the morning.”

Clare Smith commented: “Not sure he saw the funny side hey!”

Jonboy Patton penned: “Just seen this. It’ll be alright on the night moment.”

Storm Arwen has affected many regions across the United Kingdom, Ireland and France.

It has caused at least three fatalities and widespread power cuts.

Some households have been moved into temporary accommodation.

The set of I’m A Celebrity… Get Me Out Of Here! in Wales was also affected by the storm causing the show to be off air for three nights.

BBC Breakfast airs daily from 6am on BBC One.