When I first saw a young Bella Thorne on Disney’s Shake It Up, I hated her for just one reason: Everyone knew Disney only picked up starlettes with unique names (Miley, Demi, Selena), and I was devastated to see that another Bella had already been chosen. It wasn’t until years later, when I heard Thorne discussing her cystic acne, that I realized we had another thing in common. From there, an appreciation for the actress and her unapologetic-but-always-kind personality grew, and I was delighted to click over to YouTube today and see Vogue’s latest Beauty Secrets video, in which Bella Thorne’s comments about dealing with acne really hit home for me.

"My skin has been a really — a long time in the works," says Thorne, who begins the video bare-faced. "I don’t even know how many years I’ve had cystic acne, but it started off as dermatitis, and then I tried basically everything you can think of," she says, going on to list her share of trials and tribulations. "Tearing off parts of your face, like your own skin, like, burning it off. The vampire facials, the microneedling, the lasers. Every laser you can name, I’ve done it. Umm, and literally nothing worked, not one thing."

However, the turning point came when she finally found the right treatment: 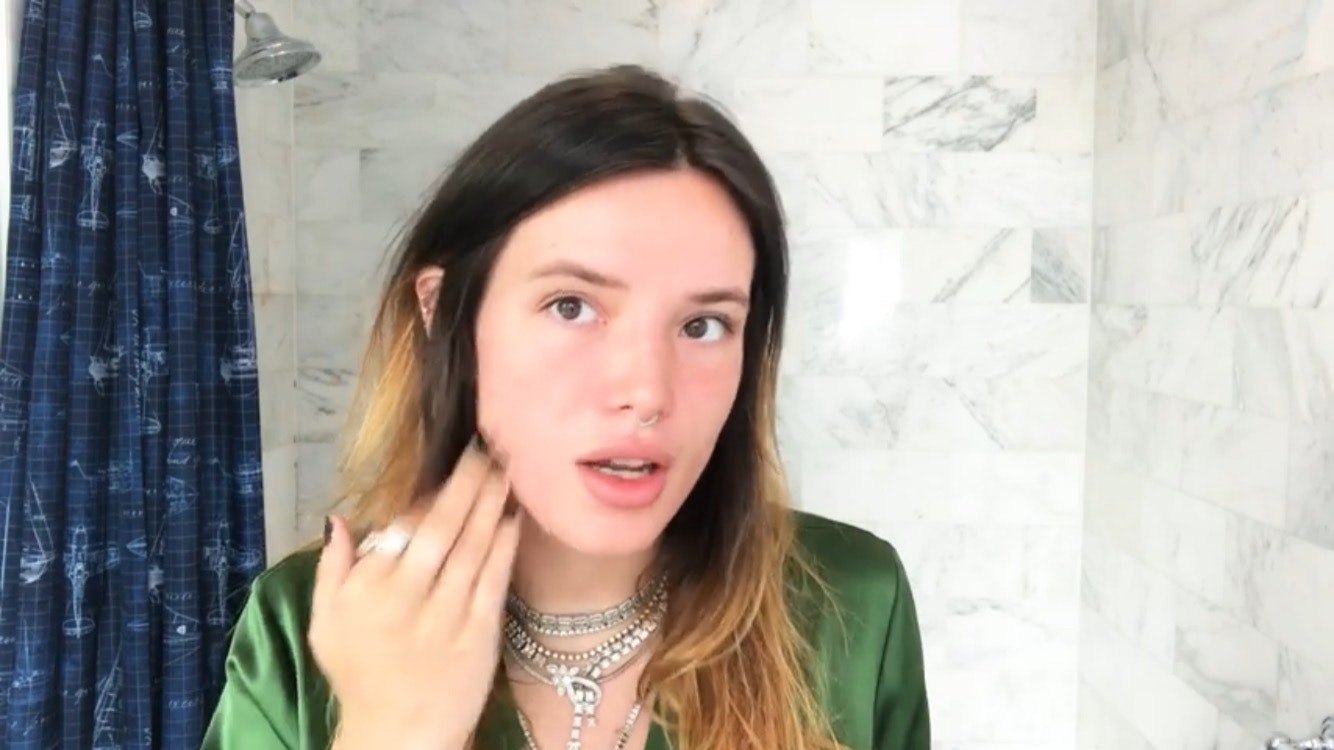 "And then I met this woman who changed my life, and now I’m re-creating her product in my acne line," she says — mic drop. That’s one way to announce that you’re creating a skincare line, Bella!

"I know it sounds ridiculous, but this is my first pimple in a minute, guys," Thorne says, going in for a close-up before beginning her makeup routine: 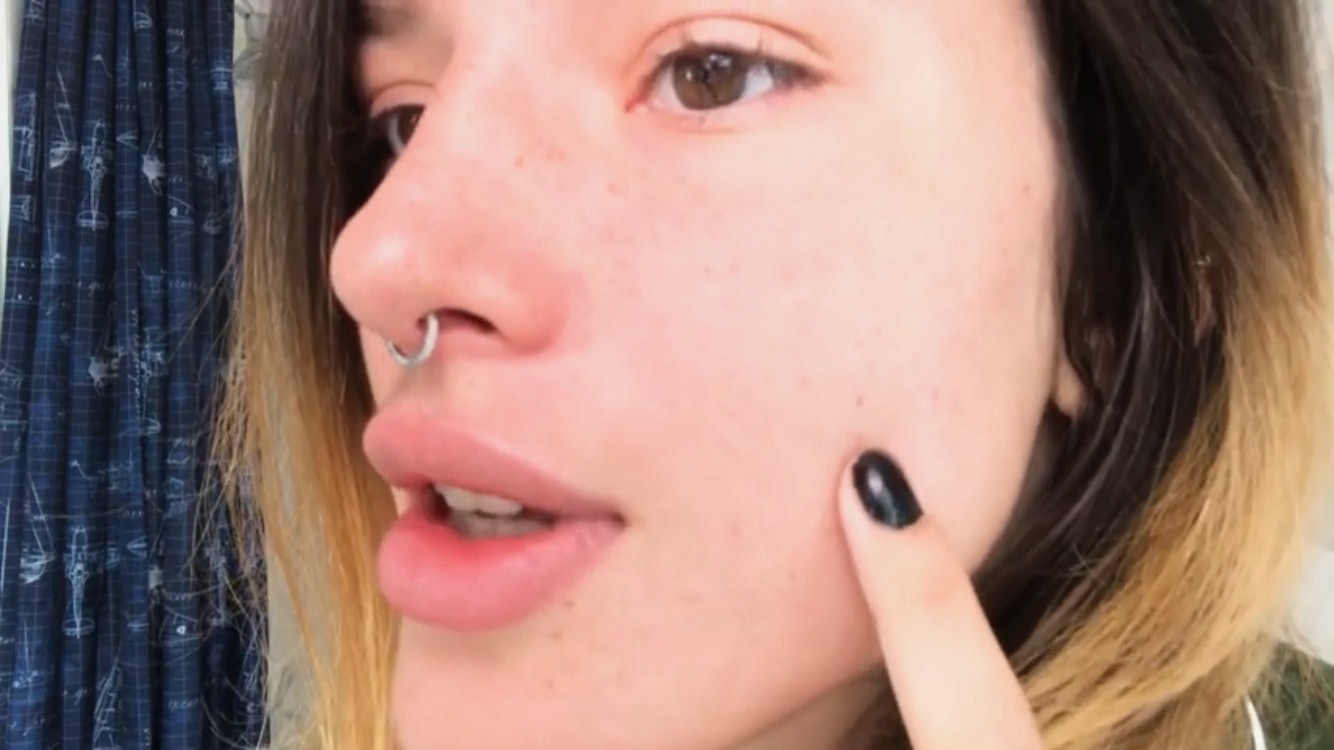 "I’m not gonna wash my face," she states right off the bat, and I’m glad to hear it. "I don’t wash my face in the morning, because there’s a thing called over-washing your face, and when I had really bad acne that was one of the things I stopped, and it actually helped my skin," Thorne explains, and she’s absolutely right about over-washing stripping away the good-for-you oils in your skin. However, because cell turnover happens while you sleep, I do recommend at least rinsing your skin in the AM, or wiping a micellar-water-soaked cotton pad across your complexion to remove the night’s dirty work. Just a tip, from one cystic acne-haver to another! "Not that I’m saying you guys have to not wash your face in the morning; it’s just something that works for me," Thorne adds, and I appreciate her sincerity.

After moisturizer, it’s onto the base! "When I wear makeup, I’m wearing Laura Mercier’s Tinted Moisturizer ($46, sephora.com)," Thorne says: 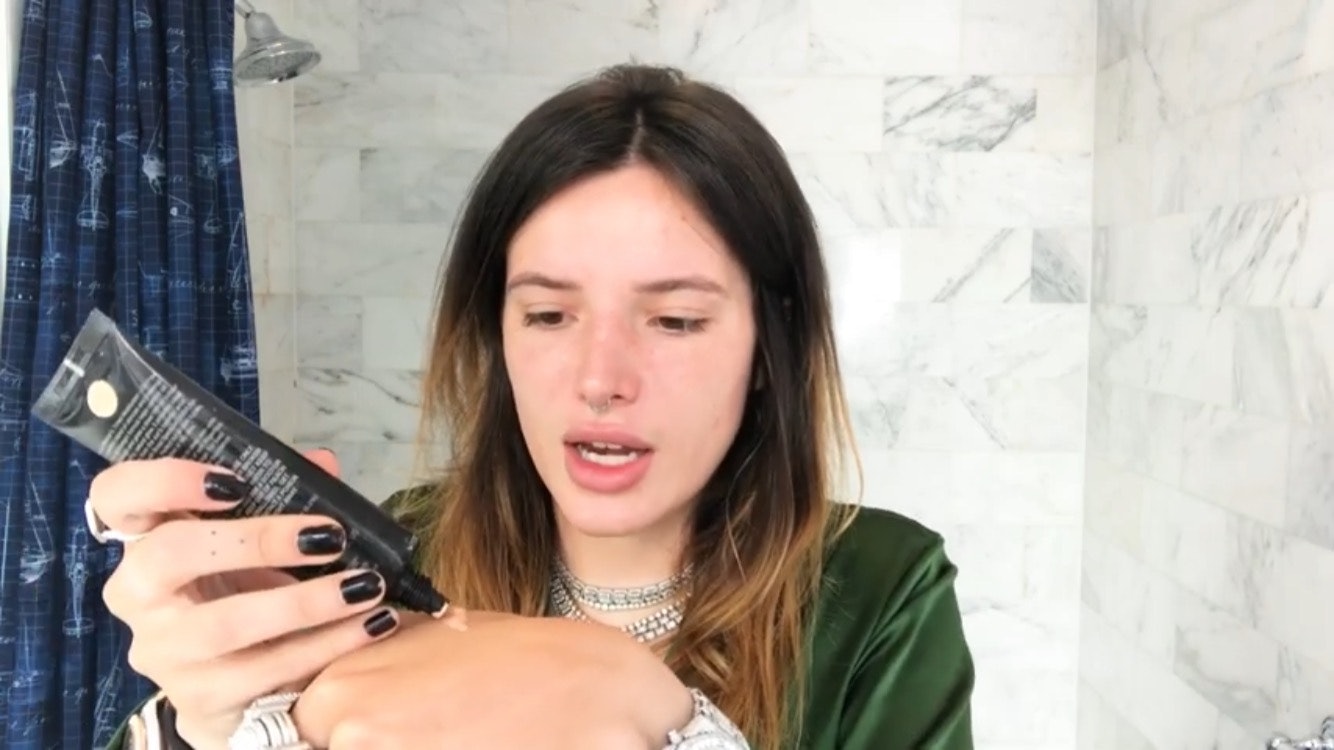 "The change in my skin has caused me to only ever do my own makeup, including on set, which is always a fun thing for me to get in contractually," Thorne says. She’s only ever looked fab on-screen, IMHO, so she obviously knows what she’s doing!

"I don’t like heavy foundation or anything like that. My skin can’t breathe, so I don’t wear that," Thorne says of why she opts for her Laura Mercier pick: 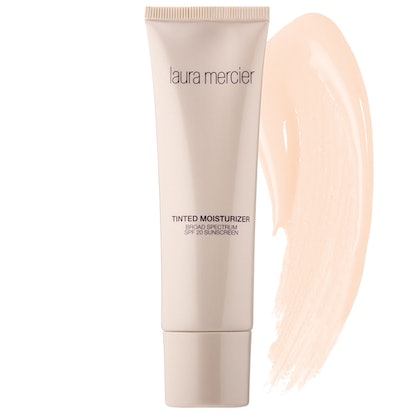 Next up is concealer, and she opts for something much thicker to spot-treat blemishes and scars: 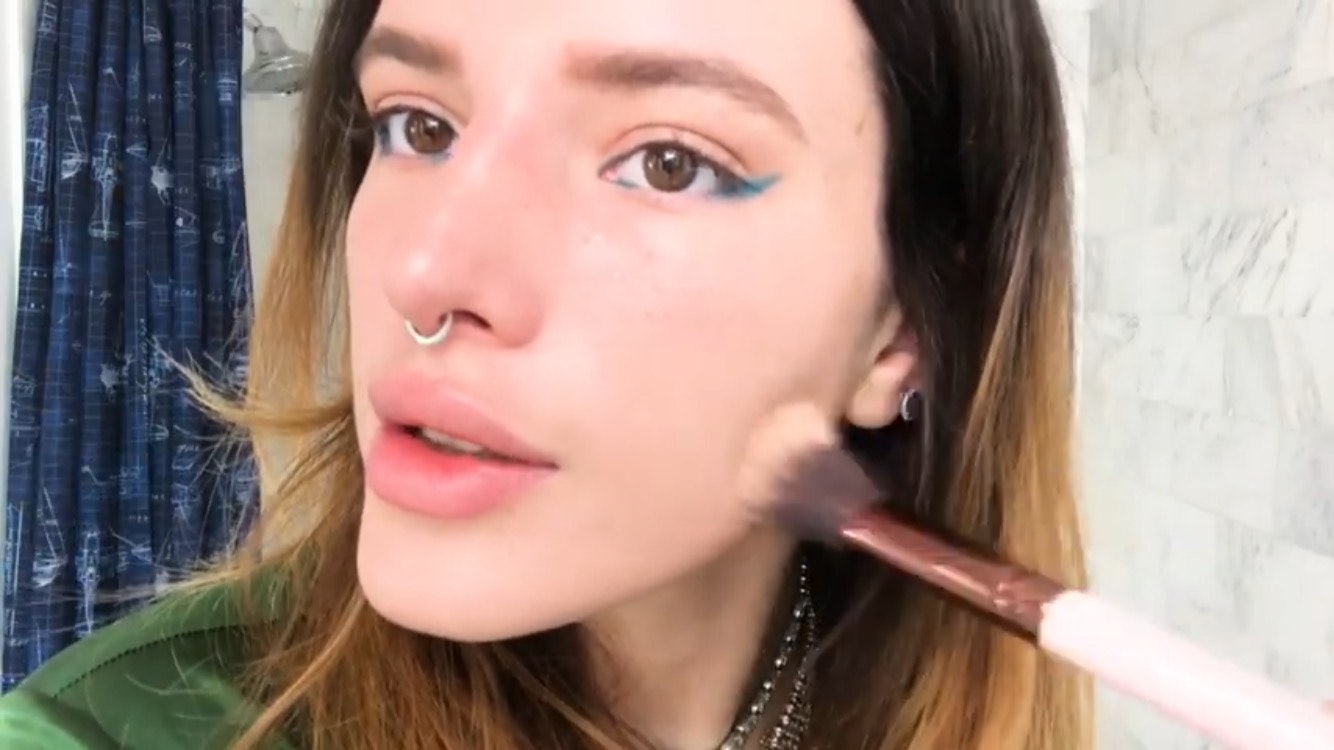 "I like Dermacolor" she admits, and I assume she’s referring to the brand’s Camouflage Creme ($32, us.kryolan.com). "I know this sounds crazy but it doesn’t break out my skin," she says, covering her only pimple and then proceeding to use the concealer to minimize the appearance of her acne scarring as well. "I use this on my scarring — especially when I had really bad acne," she notes, adding, "This was the only thing that would cover it."

BRB, buying some for my own acne scarring ASAP: 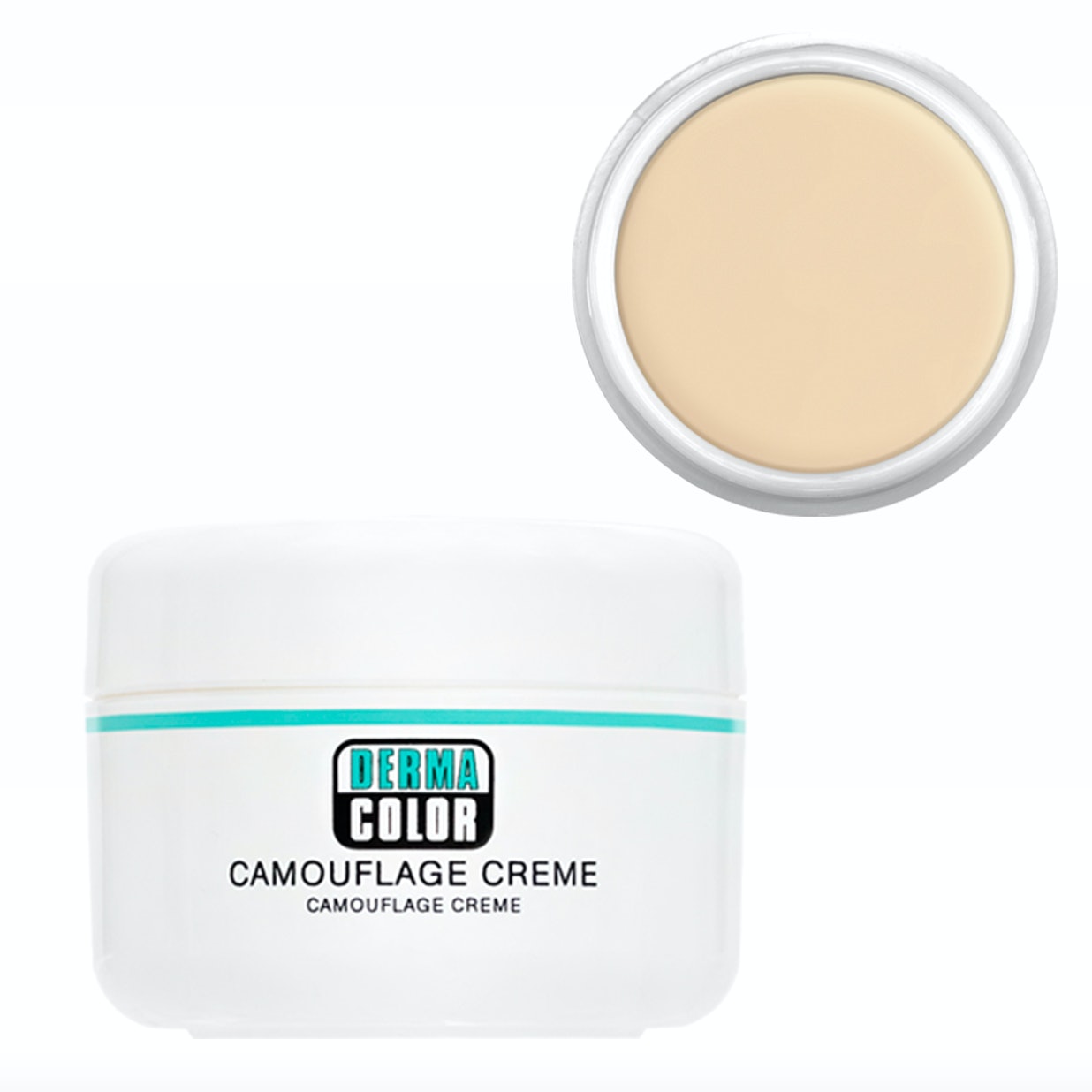 As she conceals, Thorne shares a pro tip for masking blemishes. "With concealer, and things of covering acne, people’s biggest mistake is going this way," she says, demonstrating a swiping motion. "Covering acne, you have to dot and pat," she explains. 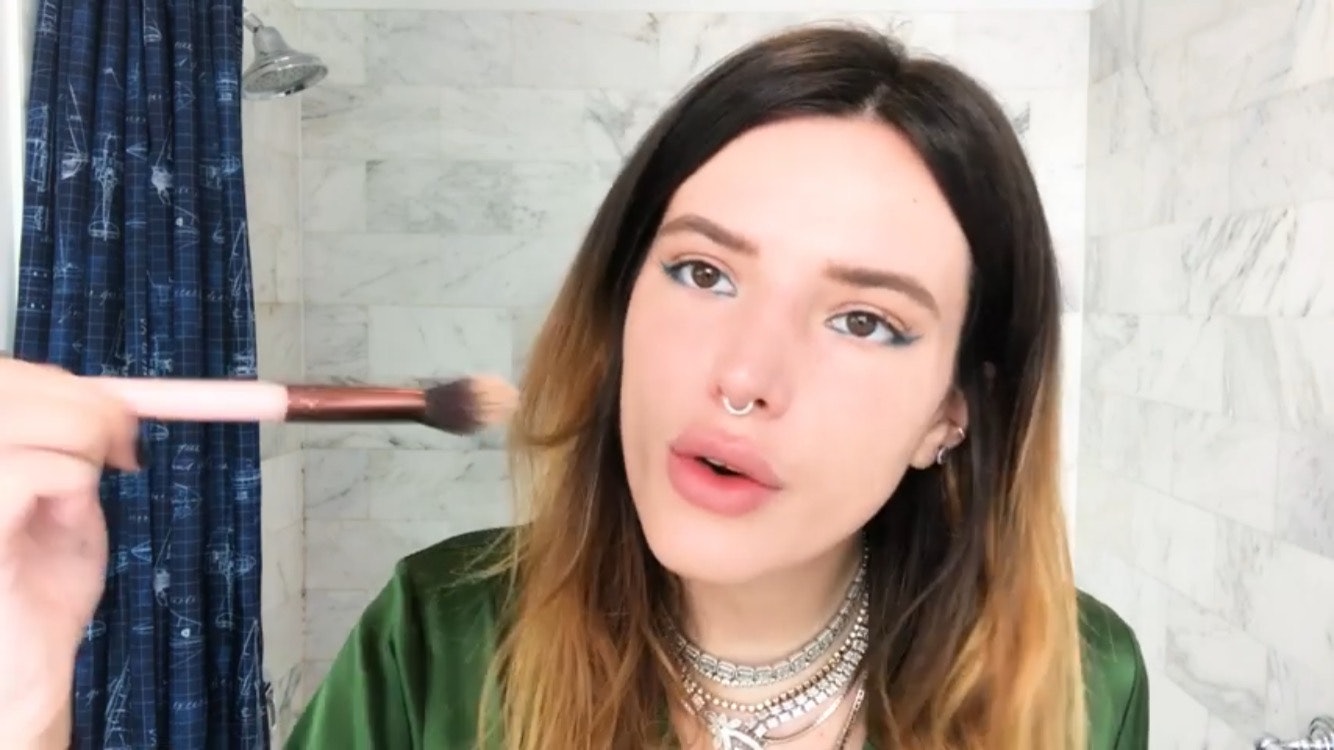 By the time her makeup is done, she’s serving a full, fierce fantasy: 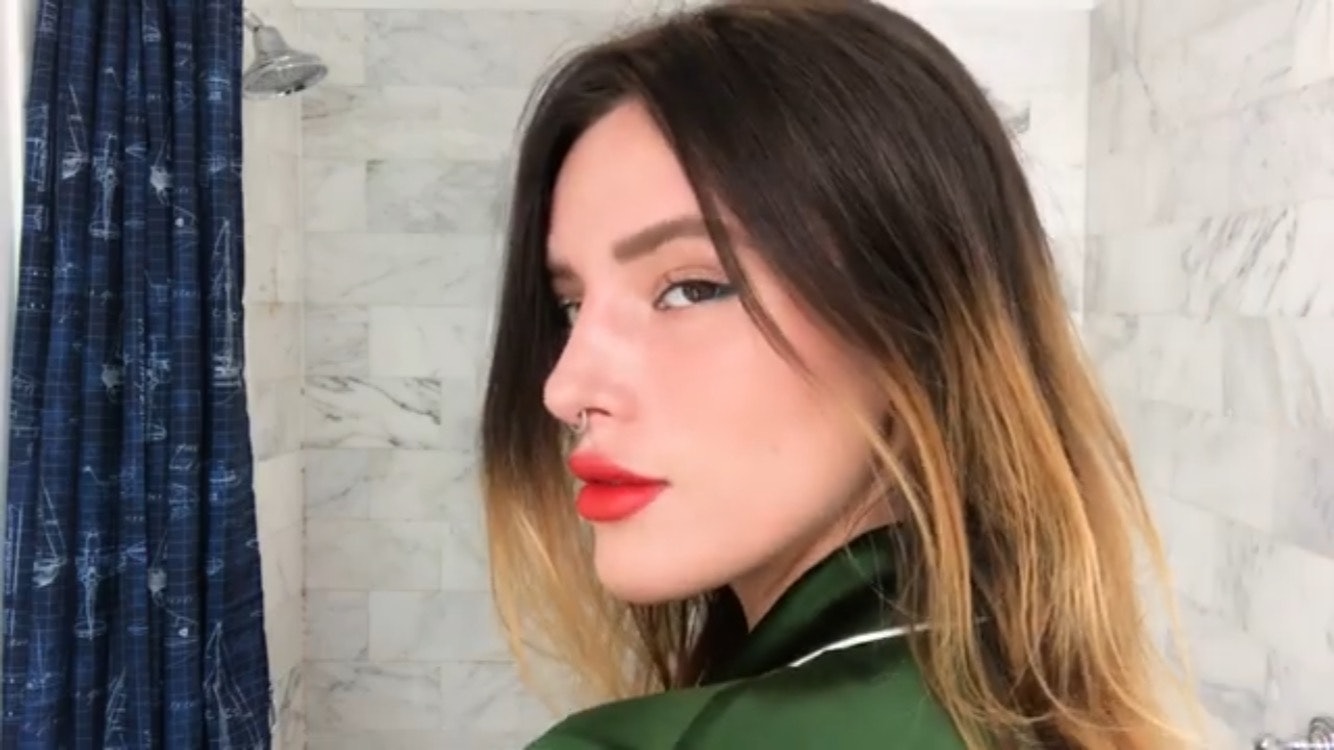 Yessss, Bella! This look is so good, I’m not even mad anymore about you crushing my childhood dreams of being on the Disney Channel! 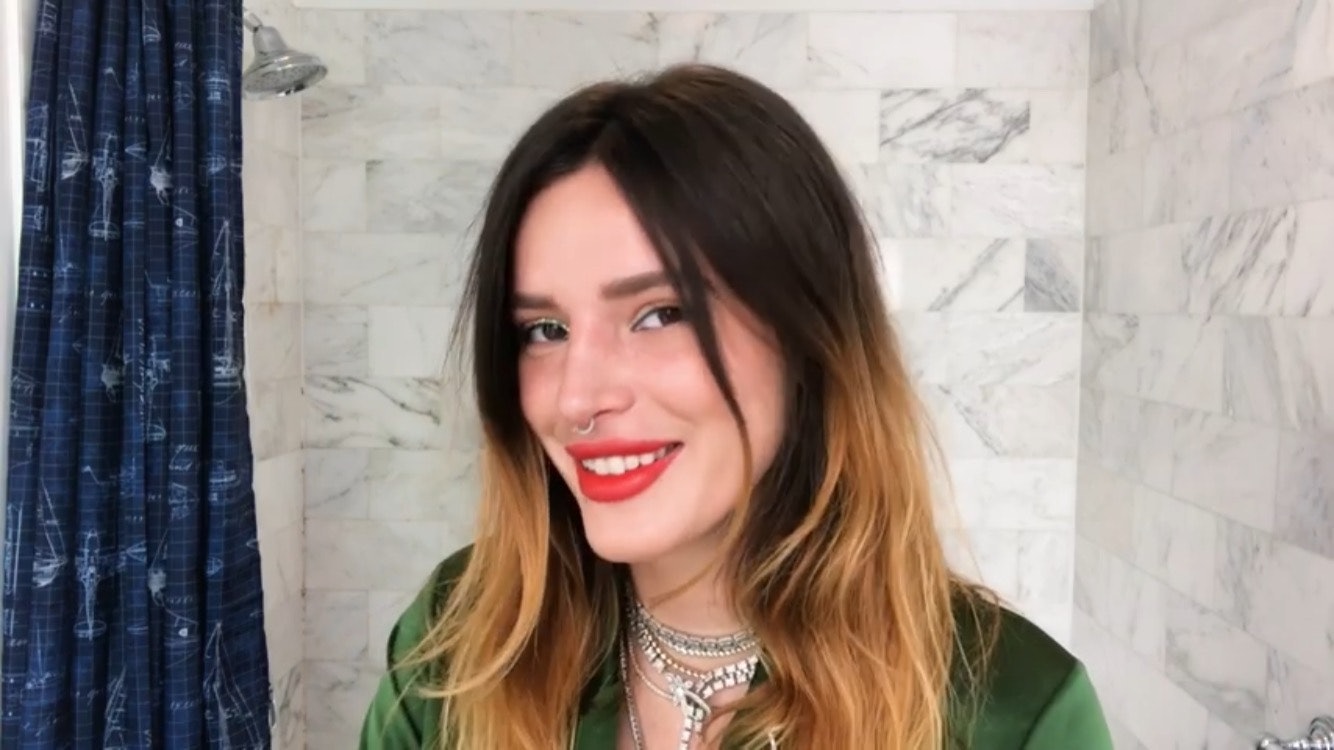 If you’re interested in watching the entire 10-minute tutorial, you can watch it below:

I love, love, love the Vogue Beauty Secrets videos, and seeing someone like Bella Thorne, who has struggled with her skin, was a real treat for someone like me, with my own fair share of skin concerns. Shout out to Vogue for the great video, and to Thorne for not shying away from talking about her skin! I’ll definitely be keeping my eyes peeled for that coming-soon skincare line she hinted about.