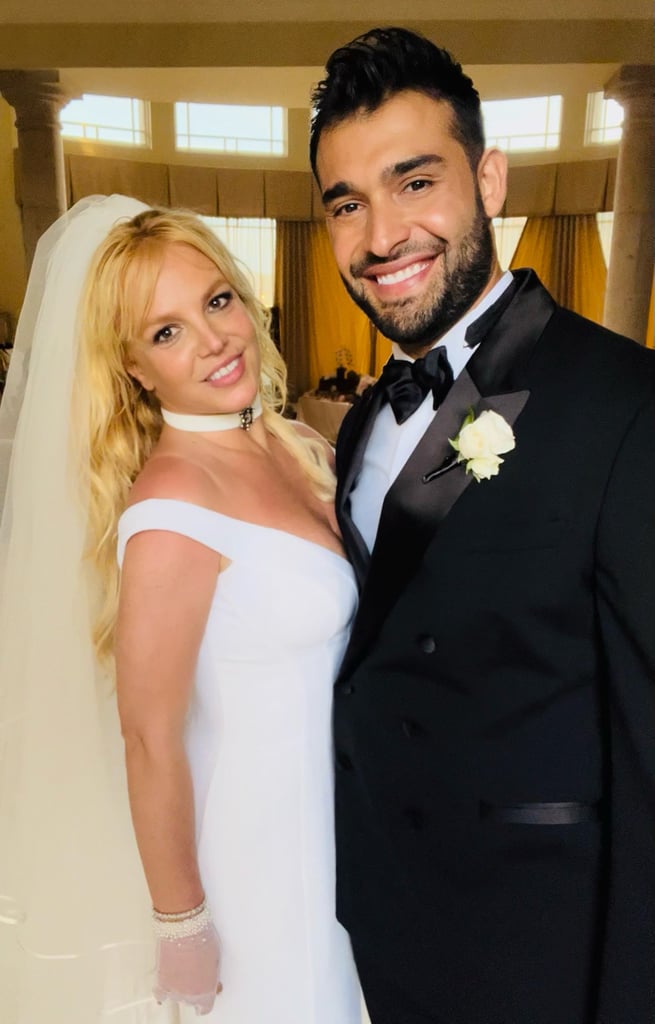 It’s been nearly two months since Britney Spears and Sam Asghari tied the knot, and the former still isn’t over their star-studded ceremony. “Guys just two months ago I got married 🎉🎉🎉 !!! Can you believe it 🙈🙈🙈 ???” Spears captioned a July 31 Instagram post, which included photos from her “fairytale wedding.” “. . . thank you @drewbarrymore, @selenagomez, @madonna, and @parishilton for surprising me !!! Thank you to Selena for telling me all she wants is for me to be happy 3 times !!! It was a very, very, very special wedding !!!”

Spears and Asghari got married on June 9 in an intimate ceremony in Los Angeles with 60 guests from their close circle, People confirmed. The singer’s sons, 16-year-old Sean Preston and 15-year-old Jayden James, did not attend the wedding, but Kevin Federline’s attorney Mark Vincent Kaplan previously told People “they’re happy for their mom.” For her special day, the bride walked down the aisle in a Dontella Versace gown to Elvis Presley’s “Can’t Help Falling in Love” and reportedly “cried happy tears” during the ceremony.

In a June interview with “Good Morning America,” following their wedding, Asghari also opened up about newlywed life and said, “It’s just surreal.” He added: “It was way overdue for us, and we imagined this thing being a fairy tale, and it was. We wanted to just celebrate, and that’s what we did.”

The pair’s marriage followed a few (not so) subtle hints from Spears previously referring to Asghari as her “husband” in a handful of Instagram posts, including her pregnancy announcement. A month after sharing their baby news, the couple revealed that they experienced the loss of their “miracle baby,” later noting that they were “moving forward” with their future.

On Sept. 12 of last year, Spears and Asghari announced their engagement via Instagram, exactly two months before the singer’s 13-year conservatorship came to an end. “I can’t f*cking believe it 💍💍💍💍💍💍❣️!!!!!!,” Spears captioned a video showing off her engagement ring. Asghari’s manager also shared the news with People in a statement that read, “The couple made their long-standing relationship official today and are deeply touched by the support, dedication and love expressed to them.”

Spears and Asghari first met in October 2016 on the set of the singer’s “Slumber Party” music video, which Asghari starred in as her love interest. They made their relationship official on New Year’s Day 2017 when Spears posted a photo of the two on Instagram, and they’ve been attached at the hip ever since. Between Spears’s years-long court battle and the public spectacle that started the #FreeBritney movement, the pair have always stuck together through it all.

See all their wedding photos ahead.