The former ‘Keeping Up with the Kardashians’ star believes the controversy surrounding the comedian’s jokes in ‘The Closer’ is about ‘woke cancel culture run amok.’

AceShowbiz –Caitlyn Jenner is the latest celebrity who has weighed in on Dave Chappelle controversy. Sharing her two cents on the criticism about the comedian’s jokes in Netflix’s special “The Closer“, the former Republican candidate for California governor surprisingly showed her support for Dave.

In her tweet posted on Tuesday, October 26, the trans and LGBTQ+ activist defended Dave against “woke cancel culture run amok” and excused his controversial remarks under the “free speech” rights. She wrote, “Dave Chappelle is 100% right.”

Caitlyn further elaborated her opinion, “This isn’t about the LGBTQ movement. It’s about woke cancel culture run amok, trying to silence free speech. We must never yield or bow to those who wish to stop us from speaking our minds.” 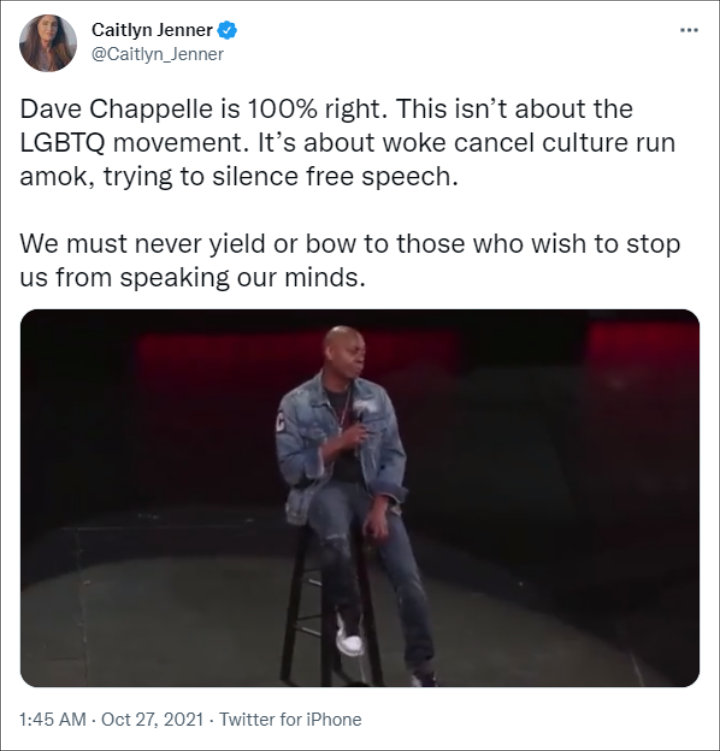 Dave enraged LGBTQ community after his comedy special “The Closer” premiered October 5 on Netflix. In it, he stated that “gender is a fact” and declared he is “Team TERF,” the acronym for trans-exclusionary radical feminist. He also suggested the blood in transgender women’s vaginas is “beet juice.”

His remarks prompted a protest from Netflix employees as well as LGBTQ activists, including actor Elliot Page (formerly Ellen Page). However, Netflix Co-CEO Ted Sarandos sided with Dave and ignored request to remove the special.

Dave himself has several times addressed the backlash. Remaining unapologetic, he said during a screening of his documentary at the Hollywood Bowl in Los Angeles earlier this month, “If this is what being cancelled is about, I love it… I don’t know what to tell you, except I’m a bad motherf**ker.” He added, “This is the kindness conspiracy.”

He continued, “And if you want to meet with me, I am more than willing to but I have some conditions. First of all, you cannot come if you have not watched my special from beginning to end. You must come to a place of my choosing at a time of my choosing, and thirdly, you must admit that Hannah Gadsby is not funny.” Hannah previously called Dave “emotionally stunted” over his trans jokes.