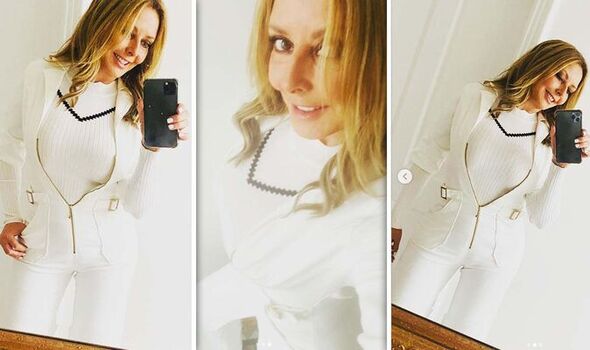 Carol Vorderman poured her curves into a skin-tight white jumpsuit

She took a series of sultry snaps

Carol Vorderman, 61, showed off her curves as she slipped into a white jumpsuit while getting ready to see Ed Sheeran in concert.

She paired her white jumpsuit with a matching jumper that featured a minimal black pattern.

Carol also matched her all-white outfit to her nails, but opted for her staple smokey eye and wore her blonde tresses in defined waves.

Two of the three selfies were taken in the mirror, while a third selfie showed the TV star giving the camera a sultry look.

She captioned the carousel: “On our way to see Ed Sheeran @teddysphotos at @principalitysta …should be a lively one…I’m naughty @wynneevans plus one. Lord help us all.

She shared pictures of her outfit choice for a special outing

Carol showed off her curves

She slipped into a skin-tight white jumpsuit

She paired her white jumpsuit with a matching jumper

She has 223,000 followers on the social media platform

The TV star went to see Ed Sheeran in concert

She uploaded a sneak peek of the show

Carol Vorderman posed for a picture alongside her friends

She wore her blonde tresses in defined waves