Congratulations to Cassie and Alex Fine — they have a second baby on the way! Just one year after the birth of their daughter, the singer announced she’s pregnant again.

Cassie is pregnant! She took to Instagram on Dec. 10 to announce that she’s expecting her second child. First, Cassie shared a sweet home movie of herself, her husband, Alex Fine, and their daughter, Frankie Fine. In the sweet clip, Cassie’s bare baby bump is on display as the family gathers together to listen to the baby’s heartbeat via an ultrasound machine. “Coming soon….” she captioned the video.

If fans weren’t able to guess the pregnancy news from that, the singer uploaded a much less subtle post a short while later. She shared stunning photos from her maternity shoot — WHICH YOU CAN SEE HERE — and captioned the post, “Can’t wait to meet you.” In the pic, it’s clear that Cassie’s baby bump is already pretty big, as she’s cradling her bare belly with her hands. She did not specify how far along she is. 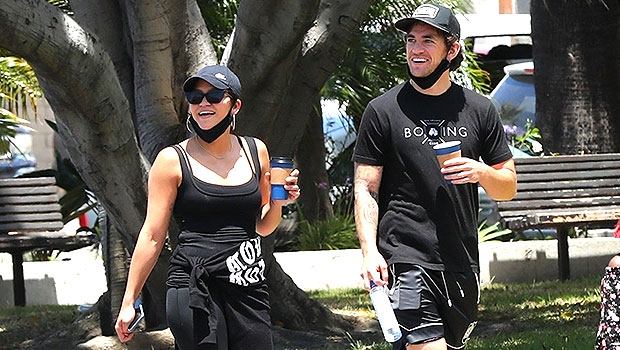 Cassie and Alex welcomed their little girl, Frankie, on Dec. 6, 2019. They shared their first pregnancy news the previous June, and got engaged that August. The pair made sure to tie the knot before their baby arrived, and they got married on Sept. 25, 2019. The gorgeous ceremony took place at sunset, and Cassie looked stunning in an off-the-shoulder dress at the ceremony.

Before Alex, Cassie famously dated Diddy on and off for years. They first met when he was still with Kim Porter in 2006, but once he split from Kim the following year, things eventually became romantic between the two. However, they didn’t make their public debut as a couple until 2012. Cassie and Diddy split for good in 2018, but she supported him after Kim’s death at the end of that year. Still, the singer went public with her relationship with Alex in Dec. 2018.