The ‘Magic Mike’ actor shares a snapshot of him posing with the ‘High Fidelity’ actress from the Cincoro Tequila Met Gala after-party after being spotted heading to the event together.

AceShowbiz –Channing Tatum has added more fuel to the speculations about him dating Zoe Kravitz. After heading to the 2021 Met Gala Afterparty together, the “Step Up” actor shared the very first photo with his rumored girlfriend via Instagram.

On Wednesday, September 15, the “21 Jump Street” actor took to his Instagram Story to post a photo of him alongside Zoe as well as Alicia Keys and Moses Sumney. Proving that he had fun at the party, he captioned his snap, “This night! No body wanted to trifle with us on the dance floor music and vibe was next level. Thank you @aliciakeys.” 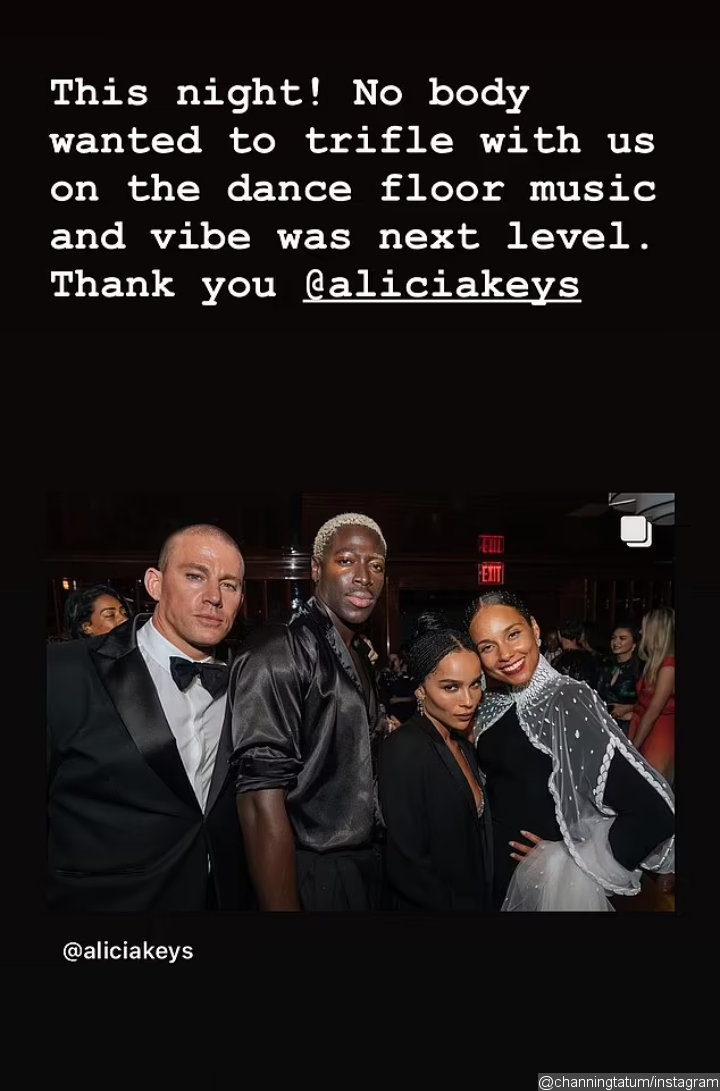 Channing and Zoe, who are currently working together on her directorial film debut “Pussy Island“, headed to the exclusive Cincoro Tequila Met Gala after-party hosted by Alicia together. A separate source told PEOPLE that the actors “did not take their hands off of each other” at the event, which was also attended by Michael Jordan, Leonardo DiCaprio and his girlfriend Camila Morrone, Queen Latifah, Serena Williams and Venus Williams, Elon Musk, Ciara, Timberland and Gabrielle Union.

At the coveted ball in New York City, Channing and Zoe were seen arriving together. For the special night, the “Magic Mike” actor looked dapper in his classic Versace black tuxedo, while the “High Fidelity” actress turned heads with her crystal, butt-baring Saint Laurent by Anthony Vaccarello slip gown.

Though the two stepped into the event together, they posed separately on the red carpet. However, a source spilled to Entertainment Tonight that the rumored couple was holding hands inside the fashion extravaganza. The insider went on to add that Channing even pulled a chair out for Zoe and helped her to get seated at the start of the night. The twosome was also spotted holding hands and leaving together before attending the after-party.

Channing was first romantically linked to Zoe after she filed for divorce from Karl Glusman in December 2020. Earlier this month, a source claimed that the pair “continue to be inseparable” after they were caught having lunch at a local Mexican eatery and grocery shopping together. The informant added, “They looked very happy. They have this cute and flirty chemistry.”

Previously, Channing and Zoe were captured enjoying a bike ride. On August 18, the actress was seen wrapping her arms around the “Dear John” leading man as he rode the bike. Two days later, the pair were photographed taking a trip out of New York City together.