Home » Celebrities » Chris Brown Marvels Over How ‘Big’ His Son Aeko, 1, Is Getting In Sweet New Pic

Chris Brown Marvels Over How ‘Big’ His Son Aeko, 1, Is Getting In Sweet New Pic

Chris Brown took to his Instagram story to share an adorable new pic of his one-year-old son Aeko driving around in a black toy car and gushed over the ‘big fella’ in the caption.

Chris Brown, 31, showed off just how fast his sweet look-alike son Aeko, 1, is growing with his latest social media pic! The singer shared a new snapshot of the precious tot riding around in a black toy car with his hands on the steering wheel on Dec. 5 and it’s the cutest thing you’ll see all day. In the photo, he’s wearing a black long-sleeved top with a blue collar sticking out and multi-colored pants, and has a relaxed look on this face as he makes his way around in the play vehicle.

Chris couldn’t help but gush over his little guy in the caption for the pic and pointed out how “big” he’s getting. “Woah big fella,” it read. The moment was certainly one he was taking in as a proud dad!

Before Aeko was riding around in his latest set of wheels, he was seen spending time with his dad and mom, Ammika Harris, when they all reunited and took a trip to Mexico together. The “Forever” crooner was separated from the brunette beauty and their little boy, who usually spend their days in Germany, due to travel restrictions brought on by the coronavirus. Since they came together again, though, there have been nonstop adorable family pics that fans can’t get enough of. 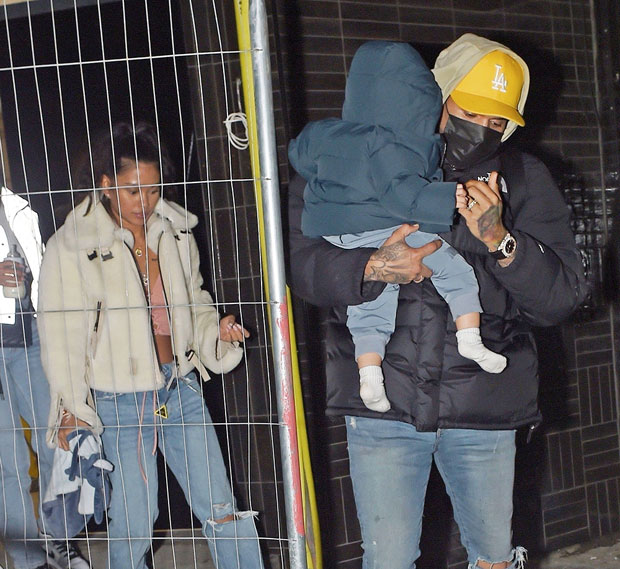 Chris’ mother, Joyce Hawkins, also reposted a pic of her darling grandson on Dec. 1. In it, he was wearing a red durag and looking off to the side with his gorgeous dark eyes. “OMG!!! HOW SWEET ARE YOU ‘CATORI’,” she wrote, referring to his middle name, in the caption.

Another awesome pic to come out of Chris’ reunion with Ammika and Aeko was a cozy photo that showed the three of them happily posing together, which was posted on Nov. 24. Chris is wearing a red baseball cap that read, “Tough Crowd” across the front in whit text as well as a matching white top that looked similar to his baby son’s.

Chris has recently returned to America, and has been “missing” Ammika and Aeko, according to one source. “Chris is back from his trip with Ammika and Aeko, he’s busy working in the studio again,” the source shared EXCLUSIVELY with HollywoodLife. “Ammika and Aeko are back in Germany so they are doing the long distance thing again, but they FaceTime every day, so they are staying very connected. It’s hard for Chris to be apart from them, he’s missing them already, but he does need to work so he had to get home.”