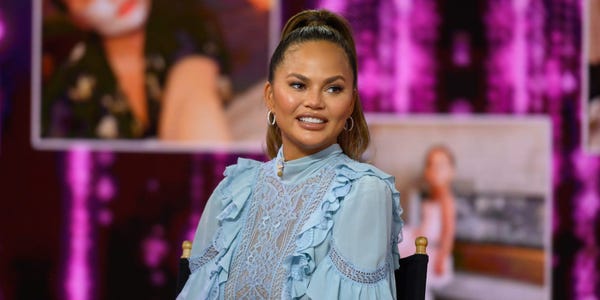 Chrissy Teigen said that she will be getting Botox to help with her bad pregnancy headaches.

In a Twitter post she shared on Friday, the cookbook author wrote that she was "thrilled" to be approved to have a Botox treatment with a combination of beta-blockers and what she described as "radio wave frequency" treatment.

Beta-blockers are a type of medication used to treat high blood pressure, according to the Mayo Clinic.

In Teigen's tweet, she also referenced "radio wave frequency something something doctor terms," which could mean radiofrequency therapy, a type of non-surgical, cosmetic treatment that can improve the texture, tone, and elasticity of skin, according to the American Society of Plastic Surgeons. It's typically recommended for patients who want to combat early signs of aging, says the American Society of Plastic Surgeons.

One Twitter user responded to Teigen requesting more information and sharing her own struggle with headaches — saying that she's not pregnant, but has been experiencing a headache for three weeks.

Teigen replied to the tweet and wrote that she has gotten Botox in her jaw for teeth-grinding and that Botox behind the brow is "life-changing" for migraines.

The couple made a subtle announcement that they're expecting a third child by showing Teigen's baby bump in Legend's "Wild" music video, which premiered on August 13.

On August 14, Teigen revealed in a Twitter thread that she found out she was already several weeks pregnant when she underwent surgery to get her breast implants removed.

"I was scared s——s. Was pretty positive you shouldn't get your boobs out while pregnant? Pretty sure," the star wrote on Twitter.

Representatives for Chrissy Teigen did not immediately respond to Insider's request for comment.