Debra Messing became a huge TV star in the late ’90s, and apparently, she thinks “Saturday Night Live” operates the same as it did back then … because she doesn’t have a clue why Kim Kardashian‘s hosting it.

The “Will & Grace” star took the bait after it was revealed the reality star would become the first Kardashian to host ‘SNL’ next month by airing her grievances on Twitter. 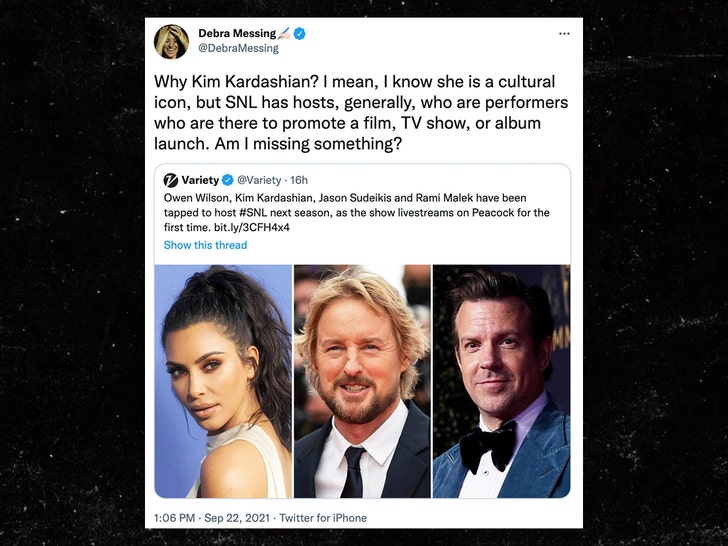 Debra questioned the choice, then added a back-handed compliment by saying … “I know she is a cultural icon, but SNL has hosts, generally, who are performers who are there to promote a film, TV show, or album launch.”

She added, “Am I missing something?”

Yep, she’s missing something. The world changed, and reality stars are at the center of pop culture and Lorne Michaels is not only a great producer but a businessman who’s in the business of getting ratings … and that’s exactly what’s gonna happen when Kim hosts.  Remember a decade ago, when actors groused that reality stars like the Kardashians were famous for doing nothing? Debra clearly hasn’t let it go.

You may recall … when Elon Musk was tapped to host last season, many people were up in arms about it because he’s not an entertainer.

Oh yeah, and one of those people … was Debra Messing.

As for shading Kim, fans let Messing have it, one saying, “Yes Debra, you are missing something. Like the last 40 years.” Another jabbed, “She’s arguably one of the most famous people in the world. It’s a smart decision by SNL … Ppl who say she’s famous for being famous would kill to be famous for being famous. She uses her platform for positive things. Everyone RELAX”

Kim’s yet to reply to Debra, but instead tweeted her excitement about hosting the October 9 gig with musical guest Halsey. Kim said, “OMFG no turning back now!!!! LOL I’m hosting SNL!!!!!!”