Home » Celebrities » Drake: If You're Reading This, It's Not Too Late to Sit Down During the NBA Finals

Drake: If You're Reading This, It's Not Too Late to Sit Down During the NBA Finals 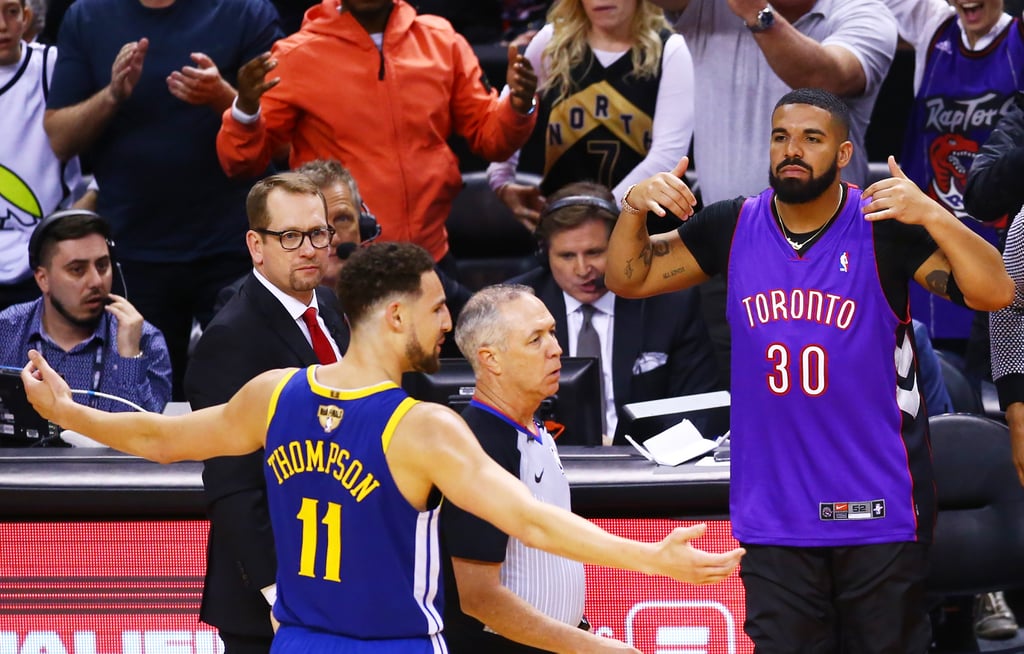 For the first time in franchise history, the Toronto Raptors are in the NBA Finals. While the superstar team is competing against the Golden State Warriors — who are looking to win their fourth championship in the last five years — the headlines surrounding the series have had little to do with these two teams; they’ve been about Drake. Yes, the rapper, who has garnered more attention over his obnoxious sideline antics than the series itself. I’ve recently found myself battling a moral dilemma — as a loyal Drake fan and an even more loyal NBA follower, I can’t seem to get behind what he’s doing on the court.

Drake getting into arguments with players during games is nothing new, but he’s recently taken his trolling to a new level, and it’s a pretty annoying distraction from the game. On Thursday night, the Warriors and Raptors tipped off for the first game of the series in Toronto. As the “global ambassador” of the team, Drake was of course in attendance, and he wore a jersey that might’ve spoken louder than his screaming from the sidelines. The rapper rocked a signed Dell Curry Toronto Raptors jersey with a big smile on his face. Steph Curry’s father played for the Raptors for three seasons before he retired in 2002, and it was definitely a choice aimed at the Warriors superstar.

Sadly, even a cool vintage jersey couldn’t cover up the fact that Drake has TATTOOS for two of the Warriors players. Seriously — permanent, real tattoos! He has the numbers 30 and 35 inked on his arm in honor of Steph and Kevin Durant. Drake covered up the tattoos with a wristband, but it’s still hilariously ironic. Before we get into the trash talking and Drake’s Instagram posts trolling the Warriors players, it’s important to bring up that just last week, NBA officials asked Drake to tone it down after the Raptors’ Eastern Conference Finals versus the Milwaukee Bucks, which he clearly ignored.

Drake is a Toronto native and, as I mentioned, the “6 God,” but getting into scuffles with opposing players and talking smack during team timeouts cannot be excused by saying he’s “just a fan.” As entertaining as it is to watch, this is not typical fan behavior, nor is it fair to the players. Take Nav Bhatia, for example. He’s a 67-year-old Raptors superfan who has not missed one home game in 24 years. He cheers for the Raptors at every game, but he doesn’t need to get in the faces (literally) of opposing team players to prove he’s loyal.

If we wanted to see Drake front and center, we’d go to a Drake concert. Instead, he’s taking the exciting and unpredictable battle between two powerhouse teams and turning it into an ostentatious display of wealth and influence. I love Drake as a rapper, but he’s crossing the line as a fan. When JAY-Z was co-owner of the Brooklyn Nets and had an actual stake in the franchise, not once did he troll opposing players and get in the faces of rival teams. He sat courtside with Beyoncé, clapped when the Nets scored, and maybe got out of his seat during an impressive play. Without any sort of financial stake in the Raptors, Drake is acting as if he bet his entire fortune on every single game. He’s acting like he was cut from the Degrassi High varsity basketball team and still holds a grudge. We respect him as a Raptors fan, but not as a troll.

It’s only been one game, but it feels like he’s just getting started. Drake taunted Klay Thompson after the Warriors shooting guard got a technical foul and proceeded to do his “Hotline Bling” dance after Klay said he wouldn’t be listening to the “soft R&B” song days prior. He got in Draymond Green’s face and called him “trash” after the Raptors won. And he took his trolling so far as to take a piece of lint out of Steph’s hair during a sideline chat and wrote on Instagram that he was putting it on eBay! “Steph Curry hair lint for sale on my eBay right now!!! username: DraymondShouldntWear23,” he captioned the photo.

Drake is a fan, and I get that this is all in good fun, but these games are not just scrimmages he’s inserting himself into. These are crucial moments where every play matters in these players’ professional careers. It’s the frickin’ NBA Finals, and he’s a rapper at the center of it all. Well, in the words of the 6 God himself, “I’m Upset.” So, Drake, if you’re reading this, it’s not too late to sit down during the NBA Finals.