After celebrating the first birthday of Gigi Hadid and Zayn Malik’s daughter Khai, Dua Lipa and Anwar Hadid stepped out for a dinner date in the city.

Dua Lipa stunned in a stylish monochrome outfit during a dinner date with boyfriend Anwar Hadid in New York on Monday. The English singer, 26, wore baggy black denim jeans, matching pointed heels with laces, and black gloves while out in the city, pairing the ensemble with a loose white blouse. 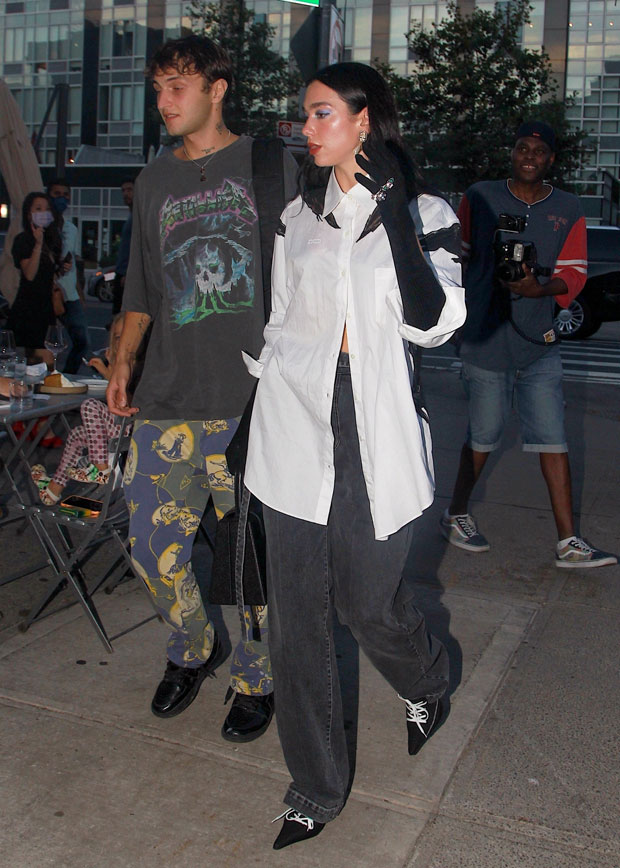 Her model boyfriend, 22, on the other hand, mixed his prints for the outing, wearing a charcoal band tee and patterned blue and yellow pants. The dinner date comes after the “Levitating” singer joined her boyfriend for a family event over the weekend: the first birthday of Khai, the daughter of Anwar’s older sister Gigi Hadid and partner Zayn Malik.

Anwar and Gigi’s dad Mohamed shared snapshots from the festivities on Instagram on Sunday, including a photo of Khai surrounded by birthday toys and balloons. Dua was also in attendance, as the Grammy winner shared an Instagram Story of her holding Khai on Sunday. “Happy Birthday perfect angel Khai,” she wrote on the photo, tagging parents Gigi and Zayn.

The singer has been dating the model’s brother for two years now; and a source previously told HollywoodLife that Gigi — as well as fellow model sister Bella Hadid — both “adore” their brother’s girlfriend. “Bella and Gigi absolutely adore Dua and they are so happy that Anwar has found such an amazing woman,” the source said. “They think Anwar has been happier than ever. . . She’s such a positive energy. It’s hard not to love her.”

The source added that all three women were friends long before Dua’s relationship with Anwar, so the sisters have a “genuine friendship” with the singer outside of her romance with their brother. “She absolutely has the Hadid family’s blessing,” the source continued. “Gigi and Bella really do look at her as a sister. She fits right in.”

The duo are notoriously private about their relationship. In her interview with British Vogue in January, Dua explained the decision to maintain the privacy. “We’re quite private. We’ll only show you as much as we want you to see,” the singer said. “It’s a little bit of give and take, trying to find the right balance of being so excited and being in love, and wanting to share that with the people around me, but at the same time not wanting to put too much out there. I want to be able to just be happy in this relationship without having other people’s opinions.”