Meghan Markle and Prince Harry welcomed their super-cute son, Archie, in 2019, and let’s make one thing clear: This little dude is not a prince. He’s Master Archie Harrison Mountbatten-Windsor, to be precise. (His younger sister, Lilibet, doesn’t have a title either, FYI.)

And if you’re confused about why Archie doesn’t have an HRH title while his cousins do, same. And, TBH, it’s got ~wild royal drama~ written all over it—we thought it was simple and straightforward at first, and it turned out to be anything but. Initially, there was a formal, seemingly legit reason given by the Royal Family about Archie’s lack of title. Then (when Megan and Harry “stepped back” as senior royals and the Royal Family responded…poorly), Megan and Harry told Oprah that royal convention would have made Archie a prince when Charles took the throne. But “while I was pregnant, [the Royal Family] said they want to change the convention for Archie,” said Meghan. (Around the same time, there was also discussion amongst the family about “how dark his skin might be” when he was born, ugh.)

The two parents were, with good reason, pissed with “the idea of our son not being safe, and also the idea of the first member of color in this family not being titled in the same way that other grandchildren would be.” Yikes. So let’s get into what we know right now.

Archie Harrison could have actually had a title totally different from “master”—according to sources at The Telegraph, Meghan and Harry initially refused an Earl of Dumbarton title for Archie because they didn’t want him to be teased.

“They didn’t like the idea of Archie being called the Earl of Dumbarton because it began with the word ‘dumb’ [and] they were worried about how that might look,” a royal source told the outlet. A second source added that “it wasn’t just Meghan who pointed out the potential pitfalls, it also bothered Harry,” which is why Archie is a master and not an earl.

Archie’s title status is…complicated. During Meghan Markle and Prince Harry’s tell-all interview with Oprah about their time as working royals, they revealed that it was the palace that decided Archie would go without a prince title. Meghan and Harry actually did want him to have the title because it comes with increased security.

And here’s why Meghan and Harry wanted him to have the title:

A source hit back from Prince Charles’ side, saying that the plans to “slim down” the monarchy pre-dated Archie…which, tbh is still not a great response.

Around the time of Archie’s birth in 2019, lots of people speculated about this whole business. Here were some of the reasons the Royal Family *said* Archie wasn’t given a title at the time.

Why is Archie not a prince?

There was a very straightforward reasoning, and it’s all thanks to George. No, not this guy: 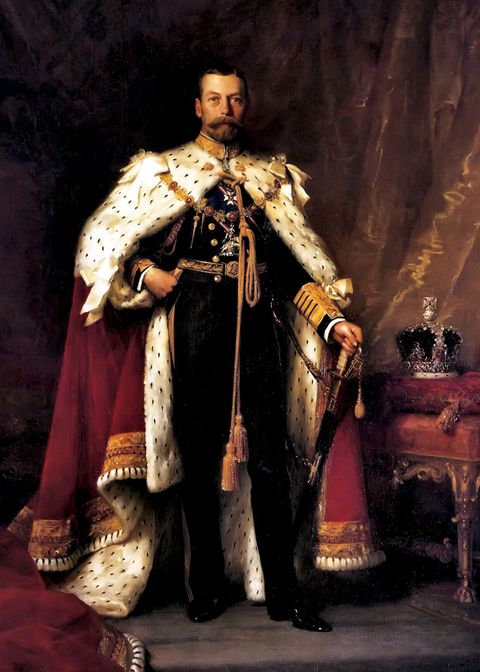 Back in 1917, King George V restricted the number of family members who could rock a royal title, and naturally, he phrased it in the most complicated way possible:

Which basically means that the titles of “prince” and “princess” are restricted to the children of the sovereign (e.g., Prince Charles, Prince Edward, and Princess Anne), the children of the sovereign’s sons (e.g., Prince Harry and Prince William), and the eldest son of the eldest son of the Prince of Wales (e.g., Prince George). But since Prince Harry is the second son of Prince Charles, his kids are not guaranteed the title of “prince” or “princess.”

Side note: At this point, you’re probably wondering why Princess Charlotte got to be called “princess” since she’s not “the eldest son of the eldest son of the Prince of Wales.” That’s because in 2013, Queen Elizabeth II issued a letters patent that removed the first-kid-only decree.

So the rules don’t always apply

Turns out, the Queen breaks her own rules all the time. Proof? She offered HRH status to Princess Anne’s kids, but Anne refused.

As royal reporter Emily Andrews said on an episode of her podcast, “For Harry’s children to be HRH, the Queen would have to issue a new letters patent, and she hasn’t, so we’re pretty sure that they’re not going to be HRH.”

Archie could have been an earl

Archie technically could have gone by “Earl of Dumbarton,” which is one of Prince Harry’s titles, but it seems like the fam thought one Earl of Dumbarton was enough. So, in formal environments, this royal bb would simply go by “Master Archie.” For the record, this is what the throne list is looking like these days:

In case you’re wondering, anyone can go by “master.” Merriam-Webster defines it as “a youth or boy too young to be called mister—used as a title,” so basically, it’s just a polite prefix.

His title could change eventually

According to royal reporter Victoria Murphy, Archie would be eligible to style his name as “Prince Archie” one day. But he could opt out, because by forgoing a title, Archie is technically a private citizen, which means he doesn’t have to be paraded around in the same way George, Charlotte, and Louis do.

Royal correspondent Roya Nikkhah explained as much in The Times, saying, “The Sussexes are not using a title for their son in the hope that he will live a more normal life.”