Hollyoaks star Stephanie Davis, 28, rushed to hospital in ambulance So much pain

Stephanie Davis took to her Instagram stories and said she was in “so much pain”. The Hollyoaks star was taken to hospital in an ambulance last night after falling ill.

While in her hospital bed and wearing an oxygen mask, Stephanie explained in a video that the onset of her symptoms – which included painful skin – “happened so quick”.

The small-screen star said that she felt she had been “run over” after waking up in terrible pain.

Taking to the picture-sharing site, the TV star shared her health issues in view of her 978,000 followers.

Stephanie began: “So last night I had a bit of a headache before bed, and my sinuses. 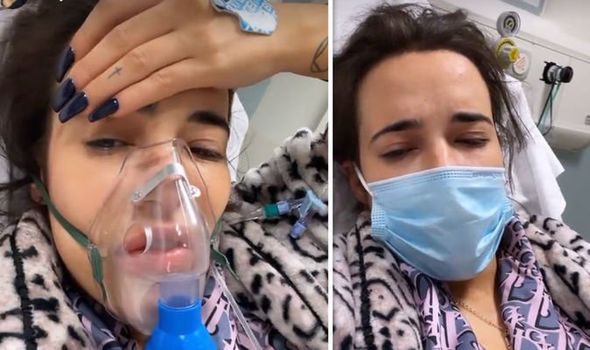 “I woke up so ill. I had to call an ambulance basically, and I’ve tested positive for Covid-19. I feel like I’ve been run over.”

She continued: “The worst part is my skin. I can’t touch my skin, it’s killing me. I’m just in so much pain.

“Oh my god, it’s horrible. And it just, it happened so quick. I basically woke up and couldn’t move.”

The mum-of-one explained she initially believed she had a chest infection.