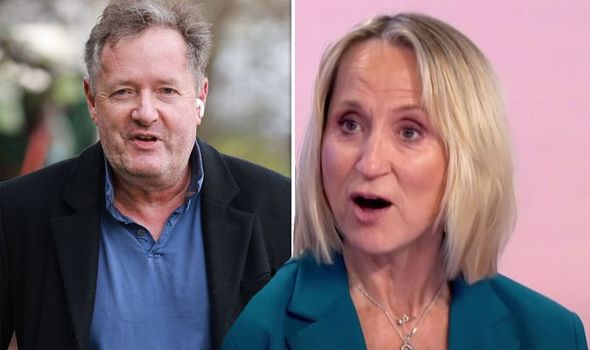 Carol McGiffin was blocked by Piers Morgan, 56, on Twitter last year after the pair clashed about the coronavirus pandemic. As his divisive tweets continue, the Loose Women panellist has taken another swipe at him.

The 61-year-old said it “pained” her to even write his name as she told readers she “loathed” him.

She stated: “This hypocritical monster continues to preach, smear, defame, demonise, insult everyone who doesn’t agree with him or do as he says, while he continues to do as he pleases.

“I hope he keeps it up because judging by the feedback he’s getting in comments and on social media, the more he lectures, the more people fight against it all.”

In August 2020, Carol said she may have “touched a nerve” as she told her followers she had been blocked by Piers.

It came after Piers tweeted: “To everyone on here deluding themselves that Covid is ‘over’, take a look at Spain’s case & death rate in the past week.

“Then wake the f**k up. This pandemic has barely started.”

She replied to his tweet, writing: “Piers. The only deluded person around here is you. No one’s buying your hysterical bulls**t anymore.

“You did a brilliant job of scaring the nation into paralysis but it’s over now.”

Carol went on to retweet further messages from people against Piers’ views.

In a later interview after their Twitter feud, she branded him a “hypocrite”.

Speaking to Kevin O’Sullivan on his TalkRADIO show, she said: “He’s got a book out about free speech. The blurb on it is basically saying people can’t debate anymore and they just shut people down.

“I’m thinking, hang on – here’s the blocker who’s shutting people down because he doesn’t want to hear what I’ve got to say to him.

“The hypocrisy is absolutely breathtaking.”

Carol isn’t the first Loose Women panellist has been at loggerheads with.

Denise Welch and Piers have also recently clashed about the coronavirus pandemic and his views on mental health.

Following his comments, Denise slammed Piers for “berating a brilliant young woman for prioritising her mental health” and branded him a “f******g disgrace”.

He also caused a stir for questioning Simone Biles’ statement after she quit the Tokyo Olympics 2020 to focus on her mental health.

The ex Good Morning Britain presenter wrote: “Are ‘mental health issues’ now the go-to excuse for any poor performance in elite sport? What a joke.”