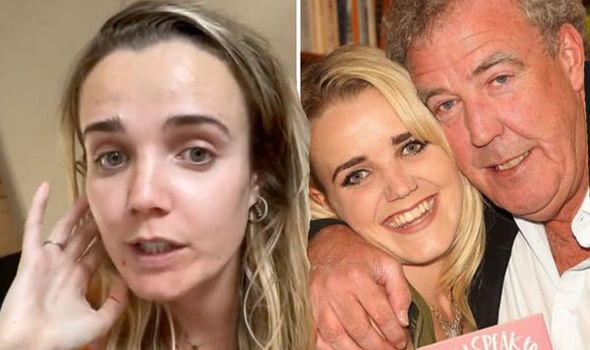 Emily Clarkson was meant to take on the Yorkshire Three Peaks this weekend for The Eve Appeal, but has revealed her mum Frances Cain and husband-to-be Alex will be doing it instead. Jeremy Clarkson’s daughter explained to fans: “Because of my chest infection, I can’t do it now which is devastating because I’d hoped to raise some money for @eveappeal which is really important for charities after an incredibly difficult year.

“Couldn’t leave it like that though… my mum and Alex have filled my hiking shoes and they’re going to do it in my place and fund raise on my behalf.”

She went on to share their Just Giving page, adding: “If there’s anything you can spare, I’d be so so grateful.”

The blogger also promised fans she’d give them an update on the pair’s progress while supporting them in Yorkshire.

She added she was “so excited” to feel better.

Emily’s post comes after she hit back at one of her followers who criticised her body shape.

The social media influencer often showcases her physique in view of her 214,000 followers and encourages her fans to embrace their bodies.

Earlier this week, she shared a picture of her wearing a bikini aged 22 and compared it to her body now.

As part of a lengthy statement, she wrote: “I have aged. I have grown. And I have changed. AS THINGS DO.

“We are sold youth RELENTLESSLY. And part of that marketing means that we are taught to fear ageing and the changes that they bring.

“Which is f*****g heart-breaking because to grow is the greatest privilege there is.”

Emily followed up her post hitting back at a troll who claimed she shouldn’t be wearing a bikini.

She wrote: “Normalise only wearing bikinis if you DON’T HAVE ONE OF YOUR VITAL ORGANS!!

“Also normalise not telling women on the internet what to do with the bodies.”(sic)

Raising Romey wrote: “Oh wow. Imagine not having a stomach?! An actual organ that keeps you living!”

Make Love Not Diets added: “Imagine commenting that thinking that he was doing you a solid get f****d lmao.”(sic)

“Normalise not telling women what to do,” Sensual Leo commented.

Emily is Jeremy’s oldest child of three, who he shares with his ex-wife Frances.

He has been dating Lisa Hogan since 2017.