John Travolta and his 20-year-old daughter, Ella, are like two peas in a pod!

The two recently made headlines for recreating his iconic dance moves from the 1978 classic Grease for an upcoming Super Bowl commercial. The 66-year-old movie star welcomed Ella with late wife Kelly Preston in 2000. They also shared 10-year-old son Benjamin and late son Jett.

John and Ella have a great father-daughter relationship, appearing in joint interviews together and giving each other sweet shout-outs on social media.

With these two in the spotlight, take a look back at some of John and Ella’s sweetest — and funniest — moments together.

Since the age of 2, Ella has accompanied her famous father to his red carpet events. One of her firsts was back in June 24, 2002, when she attended a press conference for Qantas Airlines. The tiny tot was as cute as a button in a white dress as Kelly carried her. Over the years, Ella was by John and Kelly’s side at the Be Cool, Wild Hogs, Hairspray and Killing Season premieres, among others. She also shared the screen with her parents in the film Old Dogs, and she was at the film’s red carpet. 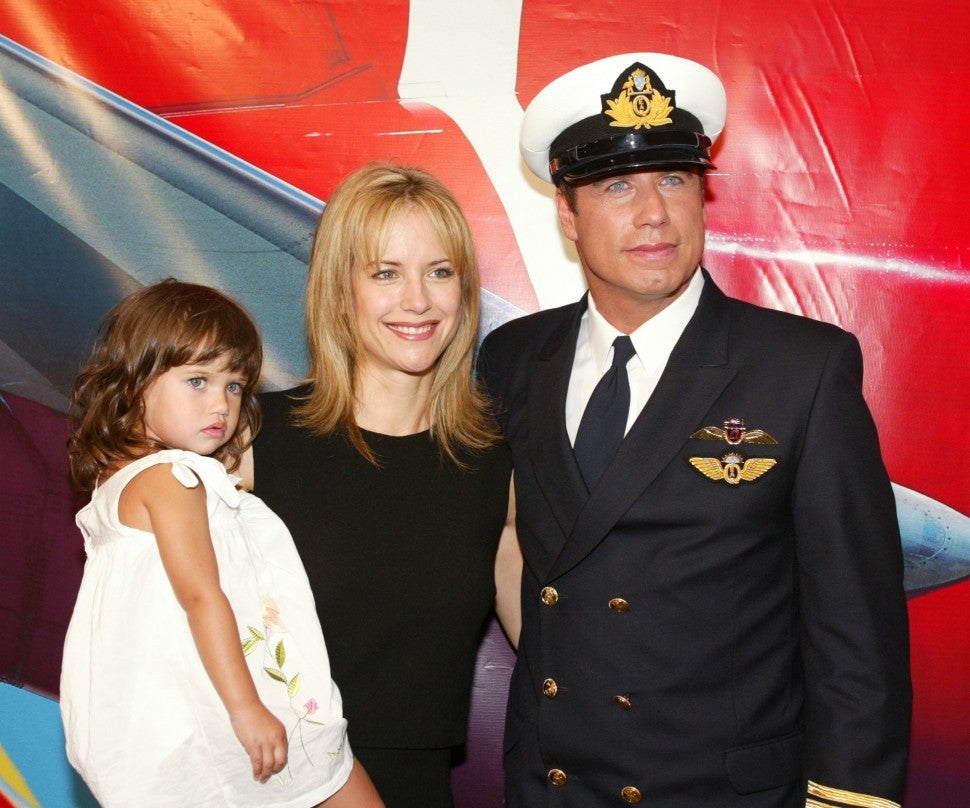 Back in 2016, Ella joined her parents on The Ellen DeGeneres Show where the talk show host asked the actor about his daughter’s dating life.

“I don’t interfere with that. I’m saving her because she has two guys that she hangs out with, [and] I don’t ask anything about what they say or do with each other,” he said. However, Ella’s mother quipped from the audience, “I know everything.”

Ella confirmed at the time that she wasn’t seeing anyone at the moment. “Good, let’s keep it that way,” her dad joked. “I never want my children to leave the house, ever.”

During another 2019 joint interview on Jimmy Kimmel Live!, Ella recalled when her famous father mortified her in front of her celebrity crush, Taylor Lautner. Ella told guest host Lena Waithe that the Twilight star and his family were going over to their house and she was looking up pictures of him before their arrival.

“Taylor Lautner was coming over to the house and I loved him. Team Jacob for sure,” she said. “And my friends and I were looking up pictures of him, just sort of, like, researching him. Like, ‘Oh my gosh, he’s coming!'”

“And then Taylor gets there and his family as well, so I was researching about them too, just to learn,” she continued. “Then, the first thing [my dad] says to them is, ‘Oh, Ella was just looking you guys up on the internet.”

“A father’s point of view is, you know, everybody loves Taylor Lautner, wouldn’t he be flattered that Ella’s looking him up?” John said in defense of himself.

Ella forgave her father for the awkward moment, and last March uploaded the photo she took the day Lautner went over to their house.

“#tbt to 10 years ago today. That time my Dad embarrassed me by telling Taylor Lautner I was researching all about him on the internet… also omg, my hair😂🏻‍♀️ #TeamJacob,” she wrote.

The Saturday Night Fever star is one proud father and loves to praise his daughter, who also has the acting bug. While promoting this movie, The Poison Rose, in 2019, John admitted to being a total stage dad.

“I am ridiculous. I’m behind the camera mouthing every word she says, doing her moves,” John said during a joint interview on The Talk. “My wife, Kelly [Preston], gets hysterical watching me watch her, because I just want it to go great.”

“Poor Ella, she hadn’t acted since the film with Robin [Williams], and they gave her the most complicated scene,” Travolta recalled, referencing the 2009 flick, Old Dogs. “Four in the morning, she had to cry, hold a gun, consider all sorts of things, and she nailed it. And the crew gave her a big applause because you wouldn’t give it to anyone to do at that time. But I said, ‘Well, she’s on her own. She’s got to deliver.’ And she did.”

The Hollywood star isn’t shy about expressing his love for his little girl. On her birthday, he’s posted photos and videos of her. He even celebrated National Daughter Day on Sept. 27, by writing, “Everyday should be National Daughter’s Day! I’m so incredibly proud of my beautiful, talented daughter.”

Ella also honors her father on his birthday and Father’s Day. Just last year, she posted a selfie of the two along with a sweet message.

“One of the many things I admire most about you is that you never cease to love and help your fellows,” she wrote. “You are gracious and selfless and that inspires me to be a better person everyday. Thank you for raising me with so much love and kindness. I am forever thankful to have you in my life and I love you so much. Happy Fathers Day Daddy!!!❤️❤️❤️”

The Travolta family lost their matriarch in July after her battle with breast cancer. In August, John posted a heartwarming video of him dancing with Ella in honor of his late wife.

“My daughter @ella.travolta and I dancing in memory of momma. One of Kelly’s favorite things, dancing with me,” Travolta captioned the video, which marked the first time he’s posted since Kelly’s death.

Most recently the two cheered each other on as their now-viral Super Bowl commercial and Grease dance moves made headlines.

“Thank you all for making @ella.travolta and I number one on Yahoo today!” he wrote on Instagram alongside a screenshot of their ad. Ella wrote a similar caption on her profile.

For more on the father-daughter duo watch the video below.