Kate Garraway, 53, joined her Good Morning Britain co-stars Ben Shephard, 46, and Ranvir Singh, 43, for a candid chat about her husband Derek Draper, 53, today. It comes after her other half’s recovery after a year-long struggle in hospital, after the former lobbyist contracted coronavirus.

Ahead of chat with her colleagues, Kate was in high spirits as she cried out over her tidy home, before suffering an on-air blunder.

Before heading to a commercial break, Ranvir began: “We can just say a quick hello to Kate.”

The mum-of-two could be seen sitting cross-legged in her living room.

Speaking via video link from her home, Kate chuckled that she had just spilled a hot beverage all over the floor, moments before the broadcast. 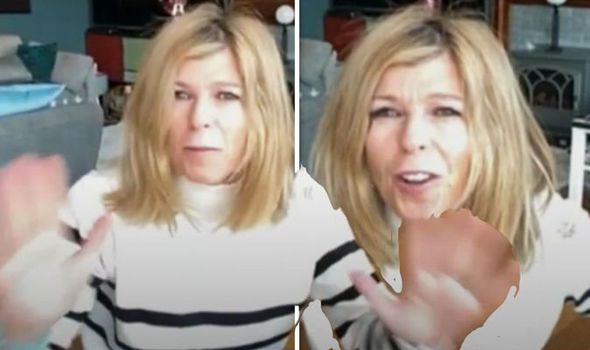 Kate remarked: “I’ve just spilled my tea all over the floor.

“There is a big puddle. I’ll clear it up and I’ll be right with you.”

Ben cheekily interjected: “We don’t want you to show the puddle right now otherwise it would look too incriminating the way you’re sitting there, Kate.”

The TV anchor giggled at her colleague and pal’s joke as he also noted her very pristine surroundings.

“I’m delighted to see how clean the room is. There must have been a bit of tidying up going on there too?” Ben quizzed.

Kate replied: “There might have been a deep clean taking place. You never know.

“I’m very organised with the Lego boxes, which I suspect will last about 24 hours.”

Her comments come after Kate recently defended her “untidiness” following the release of her documentary, Kate Garraway: Finding Derek.

She announced that her other half was welcomed home after fighting for his life for the past 12 months.

Speaking about the public’s response to the show, she told hosts Susanna Reid and Adil Ray: “It was incredibly moving,” Kate remarked.

She then added with a laugh: “And then I was also wowed by the number of people that pointed out how really untidy I am!”