Kourtney Kardashian has once again defied gravity and showed off her super strength in a video highlighting her high-flying pilates routine.

Kourtney Kardashian is the queen of wellness, and recently took to Instagram to show off her impressive pilates workout. The 42-year-old Keeping Up With The Kardashians star hung upside down from a silver frame in her backyard, and wore a black crop top with matching short shorts for the ab routine.

The POOSH founder held herself up with straps on her hands and feet on the reformer machine, and used her core to do crunches midair — how impressive! Her raven tresses were slicked back into a ponytail as she completed the workout which she previously credited with keeping her body toned and her stomach flat. Her trainer Don-A-Matrix, who also trains sister Kim Kardashian, recently gave HollywoodLife the scoop on what the girls do during a typical routine.

“I’m a big proponent of using resistance bands in your workouts, and that’s easy enough to use at home as long as you have space to work out in,” Don-A-Matrix said. “Resistance bands are a great way to get a full-body workout anywhere on the go – it allows you to sculpt and strengthen your core, chest, arms, legs, and back.” 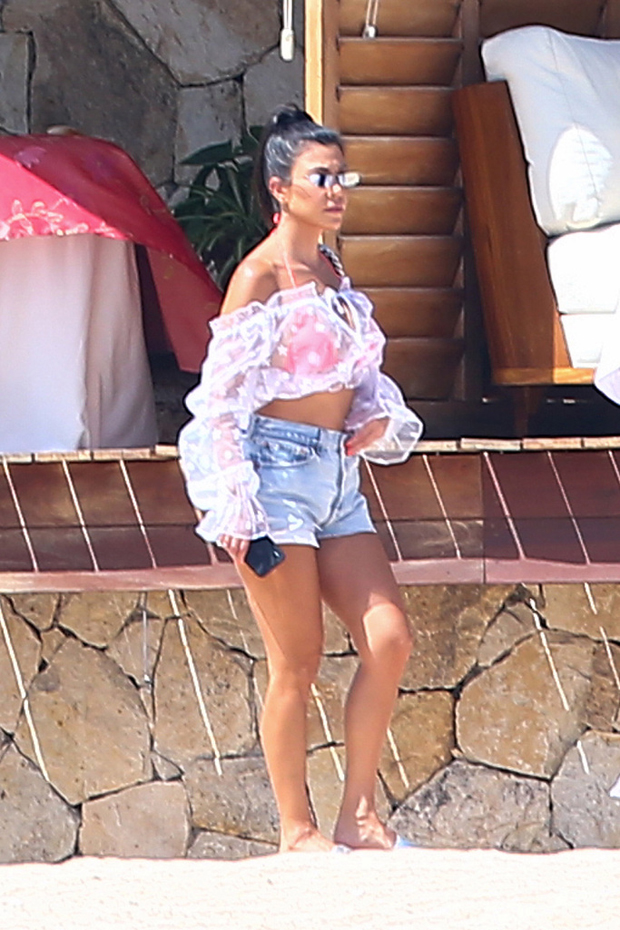 Kourt has also been in the news in recent months after revealing her relationship with longtime friend Travis Barker. Travis and Kourt go way back, and have been pals for years, however they recently took their relationship to the next level, and confirmed the romance with a sweet photo of their intertwined hands on Valentine’s Day.

In honor of her recent 42nd birthday on Apr. 18, her boyfriend paid tribute to her with a steamy snap of them kissing. “I F*****G LOVE YOU!” he captioned the post. “YOU’RE A BLESSING TO THIS WORLD. HAPPY BIRTHDAY.” The first snap showed Kourt sitting on Travis’ lap, as they passionately kissed while sitting on a couch. He also shared intimate, close-up snaps of their hands touching, and concluded with one final video in the carousel post … of Kourtney sucking his finger!