Lindsey Graham Has A Dire Warning For Donald Trump

Former President Donald Trump has been making headlines as the world speculates whether or not he will run for office again in 2024. In fact, CNN went so far as to say that Trump “can’t resist” running again and it’s no wonder. He’s managed to create a group of super-fans who have remained loyal to him even after his departure to Mar-a-Lago, Florida.

Within the Republican party, Trump has created some notable relationships. However, there’s a substantial list of Republicans who don’t support him, as mentioned by The New York Times, including Cindy McCain, widow of Sen. John McCain, as well as Colin Powell, the former secretary of state.

But one character in the G.O.P. who has had a unique and shifting relationship with the former president is Republican Sen. Lindsey Graham of South Carolina. He rejected Trump and then became his “impassioned defender,” per a more recent publication by The New York Times. Due to this unique relationship, Graham’s recent warning to Trump is creating huge waves. Here’s what he said.

Sen. Lindsey Graham says the insurrection at the Capitol could be Donald Trump's 'political obituary' 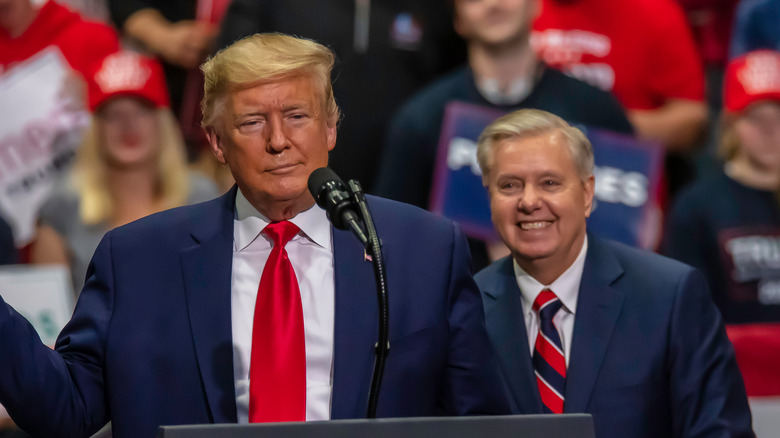 Sen. Lindsey Graham offered a dire warning to former President Donald Trump. Looking at the attack on the U.S. Capitol on January 6, incited by Trump supporters, Graham urged Trump to get over losing the election to President Joe Biden. He told The New York Times what his warning was to Trump: “What I say to him is, ‘Do you want January the 6th to be your political obituary?’ Because if you don’t get over it, it’s going to be.'”

After the insurrection, Graham famously said “Count me out,” in a speech to the Senate, according to The Washington Post, referring to the horrifying event. Yet, despite his criticism of Trump over the years, Graham has, at least as of late, sided with Trump.

In fact, he explained his meaning of that statement with the Times later, saying: “That was taken as, ‘I’m out, count me out,’ that somehow, you know, that I’m done with the president,” he clarified. “No! What I was trying to say to my colleagues and to the country was, ‘This process has come to a conclusion.'” In fact, Graham told the outlet that he has hopes that Trump can be a unifying feature of the Republican party in the future. So it looks like Graham is still firmly in Trump’s camp.