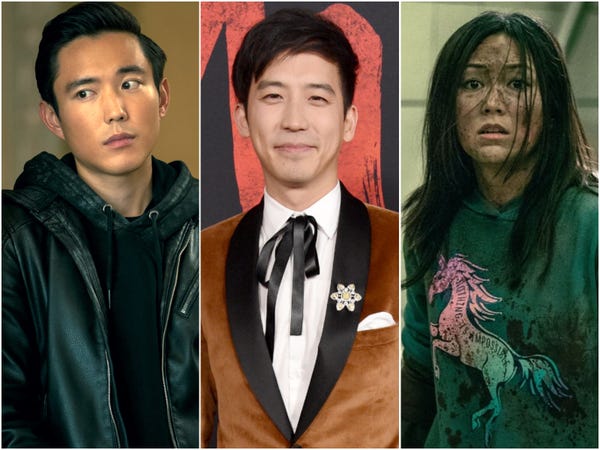 "Mulan" star Jimmy Wong posted on Twitter calling out the "tired trope" of near-silent Asian roles in TV shows, citing characters in Amazon's "The Boys" and Netflix's "The Umbrella Academy" as examples.

Wong included two photos in his tweet, one of Kare Fukuhara's mute superhero Kimiko in "The Boys," and the other of Justin H. Min's ghost Ben in "The Umbrella Academy." Both characters have little to no dialogue.

However, fans have contested Wong's view of these characters, and argue that the two characters are mute for the purposes of the show's story and the character's lives rather than any insidious reasons. Kimiko became mute as a result of severe abuse, while Ben is a ghost that only one character in the show can see.

@SalStarOfPoolie wrote: "1 of those characters doesn't speak because of trauma and the other was a ghost that only 1 character could see. That's plot reason 4 not communicating Im sorry you're reaching and seeing racism where none exists Plus kamiko is a fing badass. I will not hear bad things about her."

Another fan argued that while they agree with Wong's assertion, "The Boys" isn't "just another one of those shows." @schmuckaduck wrote:"They have paved the way for Kimiko to break that trope in future seasons, and her character was excellently redesigned as compared to the comics."

Wong actually replied to this comment, as well as several others, and argued his view further. Wong wrote: "But she absolutely started as that kind of character and the showrunner agreed and admitted that he wanted to fix that mistake. So the extra context is important (I've included it in replies to my main tweet), and it still means The Boys 100% DID start as one of those shows."

Wong cited a Digital Spy interview with the showrunner of "The Boys" Eric Kripke, writing: "Seriously people, the showrunner even admitted to it and worked towards fixing it in Season 2. Stop giving these things a pass because 'it's how it was in the comics.'"

In the interview, Kripke said: "One of the things that I wished I could have done better in season one was to give Kimiko more of a voice. I think we stumbled inadvertently into a little bit of a trap. There's the stereotype of a quiet Asian woman, and I was very conscious of not wanting to do that."

Kripke also said that his show has to make sure that Kimiko has a "strong voice and a very strong point of view." He noted that: "just because she can't speak verbally, it doesn't mean that she can't speak. And that she has opinions, and she's a real person."

Wong also tweeted a thread "for all the 'well, actually' or 'don't be triggered' replies," citing more examples of the "tired trope."

In it, another of Fukuhara's roles is called out: her "Suicide Squad" character Katana. Also mentioned were Miya Cech as ZhenZhen in Netflix's "Rim of the World," Hana Mae Lee in "Pitch Perfect," and Devon Aoki as Miho in "Sin City."

Wong tweeted that the problem could be caused by several reasons, but believes that "savvier writing" could positively tackle this issue. Wong wrote: "I feel like these problems are always what we see after a snowball has tumbled down a mountain in the process of getting a project made, whether it's a bad script, bad overall casting choices, or whatever. It could all change with savvier writing imo."

This is not the first time Netflix has been criticized for their portrayal of Asian characters. In August, "Daredevil" actor Peter Shinkoda said that the former head of Marvel Television, Jeph Loeb, once said that "nobody cares about Chinese people and Asian people."

Shinkoda said that "Jeph Loeb told the writers room not to write for Nobu [Shinkoda's character] and Gao," meaning that more developed plot lines and backstories were cut from the Netflix show.

Representatives for Amazon Prime and Netflix did not immediately respond to Insider's request for comment.