Home » Celebrities » Olivia Wilde Was 'An Addict' For Harry Styles While Still With Jason Sudeikis – And Even Gave Up Her Dog For Him?!

Olivia Wilde Was 'An Addict' For Harry Styles While Still With Jason Sudeikis – And Even Gave Up Her Dog For Him?!

As you probably read already, Jason Sudeikis and Olivia Wilde‘s former nanny is spilling all the tea on what was really going on when the Don’t Worry Darling director left for Harry Styles — which, by the way, is what she makes absolutely clear is what happened.

After all the conflicting reports about the breakup, it was nice to get a theoretically objective view from an insider who watched the whole debacle unfold. Of course, the former couple came together for about the first time since all this started to deny their ex-employee’s “false and scurrilous accusations” — not surprising, as frankly it made both of them look terrible. But gurl brought some receipts in the form of text messages. And in the second part of her interview with DailyMail.com, she’s giving more of the goods. And they’re bad.

OK, to start — Olivia has long held that she and Jason ended things months before Harry. We’ve had plenty of reason to doubt that. Some sources early on contradicted it, which was sketchy enough. And then of course there were insiders saying Olivia messing around on Jason was part of what started the feud with Florence Pugh.

According to the nanny, not only were Olivia and Jason still together in November, the filmmaker was still very much acting like she was still part of a couple, being naked with him, sleeping in the same bed. Heck, she says Olivia was still sending Jason texts and “voice messages saying he was her everything” as late as December — right before going public with Harry!

“It was how can this be that she was just in this relationship and now she’s holding hands with a different person in front of everyone a month later. That was pretty shocking.”

Supposedly Olivia and Jason were broken up before the movie started filming, before she was hanging out with Harry. But the nanny says they actually were in couple’s therapy — and talked specifically about the whole Harry thing!

The nanny says the couple’s therapist thought Olivia was literally “addicted” to Harry, that “Harry is her crack, that this is like an addiction she has.” She says the family were told they had to treat the infatuation that way:

“ said to me, ‘Olivia is like an addict right now so we have to treat her like an addict to get her back to the family. It’s like having a drug addict come back to reality.’”

The nanny showed DM alleged text messages with Jason, in which she complains about Olivia not being around anymore when she was supposed to. The caretaker writes that Olivia was “always late and a mess” lately, implying she wasn’t on time “for the kids” because she was out with Harry:

“She’s not even working and it’s Sunday”

Per these alleged texts, Jason agrees:

Another time, the nanny complains about Olivia not wanting to FaceTime the kids and then being selfish when she was around, to which Jason apparently agreed sadly:

“Yeah. She just doesn’t want to be a mom right now. She just wants to wear the necklaces.”

In another text she writes to him about the Harry situation:

“I honestly feel she was just here with us as a family and then within a day she moved on and in w someone else and is a stranger. It’s just so bizarre.”

Jason’s response in the purported texts?

“This is what happened. And think how I feel. After nine years.”

In another convo, the nanny exclaims:

“Anyhow, I’m not one to be manipulated or fake. I just can’t believe she’s living this life w Harry and hasn’t said a word about it to me…”

“She’s embarrassed. And not living in the real world. And we are a part of that real world.”

He also suggested they not reach out on the group chat they had — that they need to:

“Let her come to us… her family. And let’s see what happens when she does.”

The nanny does say she sat down and spoke to Olivia about Harry, though in person, meaning there isn’t a record of it. She told DM she confronted the Booksmart director about the sudden issues — and the Harry of it all:

“Olivia and I sat down and Olivia told me, ‘Oh we’ve been having some problems for a while.’ I said, ‘I never knew. I never, ever knew. I’ve never seen you guys get into an argument.’  She said, ‘I didn’t want to burden you because you’re so loving and such a bright light to our family.’ I was caught off guard because I lived with them and was around them and I never saw any of this happen.”

This nanny, if nothing else, is bold as hell. Because she says she fully asked Olivia about the cheating allegations!

“I said to Olivia, ‘Jason told me you’re f***ing somebody.’ And she kind of rolled her eyes and looked the other way, and said, ‘He’s just jealous of me.’ She didn’t deny it. She couldn’t believe he’d told me that actually. Nor could I. So that was the first time I let her know about .”

If all of what the nanny is saying is true, it seems clear now Olivia left Jason for Harry. The Ted Lasso star was jealous, for sure. But hell, we’d be too if our significant other was off with THE Harry Styles. Near as we can tell from the nanny’s account, he still thought there was a chance for the couple, as long as they could get her away from the One Direction singer. That doesn’t sound like someone with whom she amicably broke up months earlier.

According to the nanny though, there was no way Jason was going to keep her away from Harry. Nothing was. How much was he really like an addiction for her? The nanny says Olivia gave away her dog, a Golden Retriever named Gordon, so she could spend more time with her new guy!

First, the ex-employee said, Olivia arranged for the good boy to live with her dog walker, who lived in NYC, but then she just suddenly wanted rid of him:

“After left , she came for a visit and said, ‘We have to find Gordon a new home,’ nonchalantly. Jason doesn’t really care for animals and wanted him out of their home asap.”

Apparently the dog was very much Olivia’s — but when she had Harry, she did not have time for it anymore! The nanny continued:

“Jason said Olivia only had the dog for appearances anyway. She rarely cared for Gordon or Paco, the dog she had before. It was myself and others who cared for the dogs. I told Jason I knew somebody who loves Gordon and was willing to take him in so Jason said, ‘Let’s get him out of here right away.’”

Imagine tossing aside your dog for a guy. Wild. So to speak.

The nanny says Olivia was always very positive about things, very optimistic about her future with Harry. She recalled a conversation in which she confronted her, saying:

“Olivia wanted to believe things are going to be all good. I let Olivia know, ‘People are hurting right now — your family, friends, Jason, the kids and even me.’ I said, ‘I’m brokenhearted for you all.’ I let her know and she said, ‘It’s going to be better now, it’s going to be good.’ She just thought everything would be so great and they would co-parent.”

But some of the most savage criticisms of Olivia, as to be expected, came from her ex. The nanny says:

Ew. Really gross if true. But also odd, considering how much she did say she was blissfully happy with him and bragged about their passionate sex life way back in 2012… 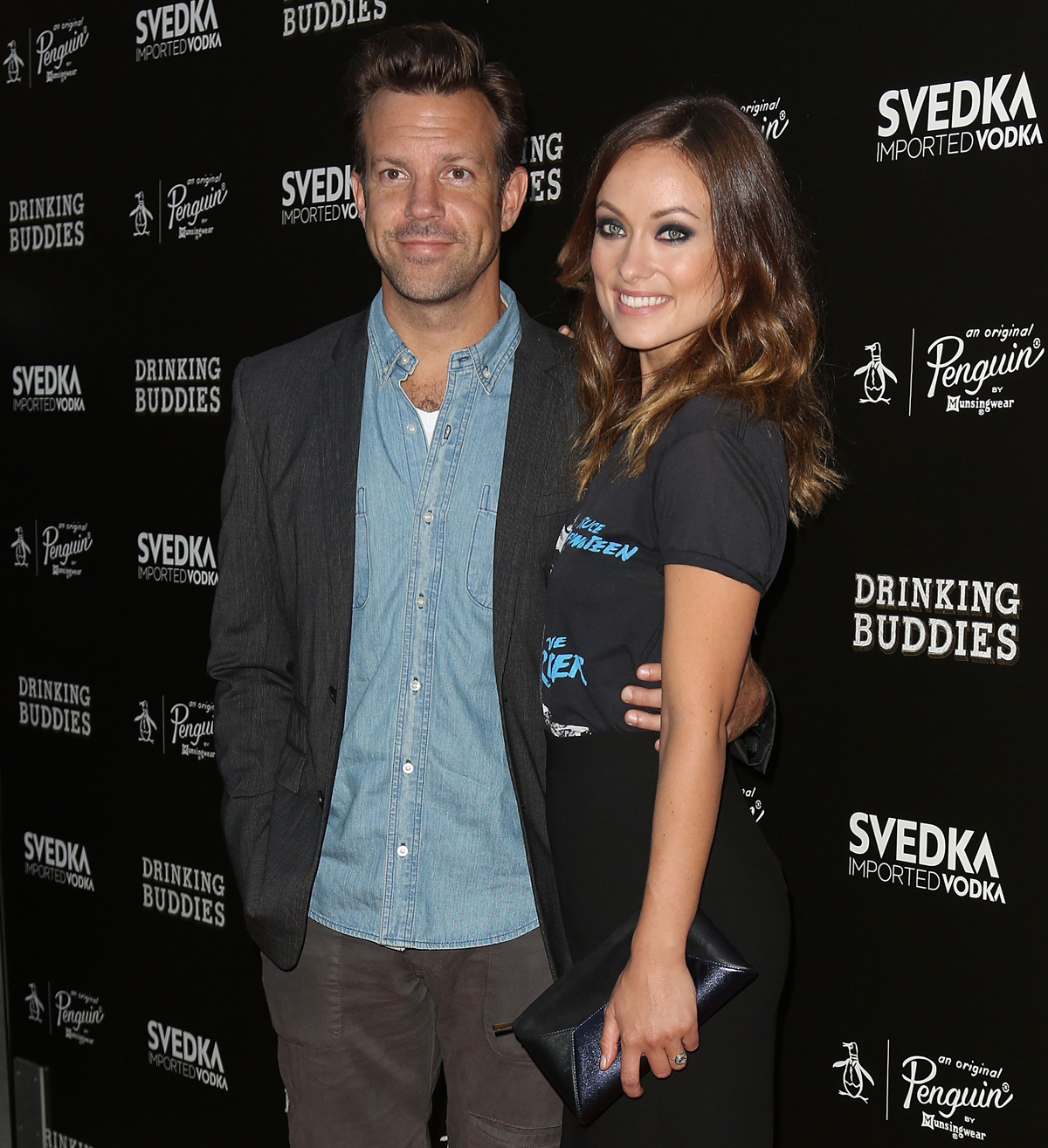 Then came the nanny’s harshest criticism. Not facts, no texts, just her opinion of Olivia. She blasted her former boss, saying:

“Even now with Harry, I really believe she’s feeding off his fame to be relevant. She wasn’t really that great as an actress or director. Jason called her mediocre. It’s kind of like, OK, now she’s in the spotlight and Jason always said she wanted the spotlight. Now she gets the spotlight because of Harry’s fame.”

Whoa. That’s way offsides. Cruel even. Is this coming from Jason or from her? Booksmart was critically acclaimed and loved by audiences. Mediocre?? What??

For what it’s worth, Olivia and Jason have come together to blast the nanny’s tea-spilling marathon, saying in a joint statement to multiple outlets:

“As parents, it is incredibly upsetting to learn that a former nanny of our two young children would choose to make such false and scurrilous accusations about us publicly. Her now 18 month long campaign of harassing us, as well as loved ones, close friends and colleagues, has reached its unfortunate apex. We will continue to focus on raising and protecting our children with the sincere hope that she will now choose to leave our family alone.”