Paris Jackson is publicly defending her marijuana use once again.

The 21-year-old model and daughter of the late Michael Jackson came under fire recently for candidly admitting that “marijuana” inspired one of her recipes for spaghetti grilled cheese sandwiches with mozzarella.

We’re not quite sure how one quirky recipe could cause this much of a stir, but alas here we are.

One user on Twitter took quite an issue with Jackson’s cannabis-inspired snack, and tweeted at the star:

“druggie. I bet you do meth too. Your dad must be ashamed of you. Degenerate.”

Wow. Talk about making a stretch! Jackson was quick to call the troll out on his crappy comment with a sarcastic response of her own. 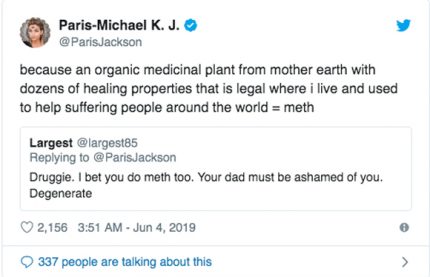 Our readers know that Jackson has been candid about toking it up for quite a while now. She celebrated her recent milestone 21st birthday by smoking a fat “birthday doobie.” So yeah, the girl definitely loves weed.

But to call her a meth head is uncalled for, to say the least!

“Instead of taking poisonous addictive pharmaceuticals, this incredible medicine from the earth has been prescribed to me to help with my depression, anxiety, ptsd, and insomnia.”

Paris has openly struggled with her mental and physical health over the years. She was hospitalized back in March over a reported suicide attempt, though she immediately denied the rumors in a tweet directed at TMZ over their supposedly fabricated initial report.

She declined to go to rehab after the incident, but sources close to her revealed that at that time, Paris was “in a much better head space”following her recovery and she’s been spending time with (and taking advice from) people “who genuinely care about her.”

Is it really a huge deal that she’s indulging in cannabis right now?

Jackson went on to tell a different Twitter user that she only uses occasionally as needed and refrains while working or driving. 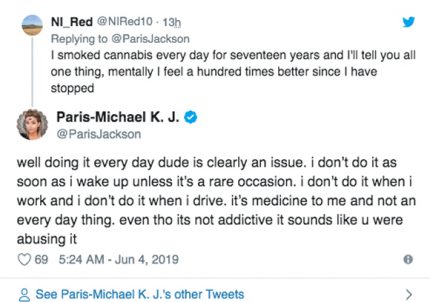 She even recommended they use some CBD, a cannabis plant extract commonly used to treat chronic pain and anxiety, since it’s worked so well for her:

Thoughts, Perezcious readers? Sound off in the comments below!