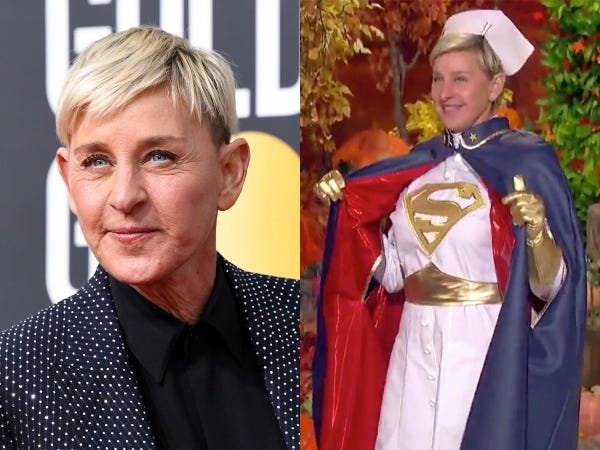 People are dragging Ellen DeGeneres for her superhero nurse costume after the host faced backlash for her reported behavior this year.

On Twitter, DeGeneres shared a clip of herself in the costume, along with the caption, "My costume this year is inspired by the real superheroes of 2020."

And while the host was seemingly referencing the important work that doctors, nurses, and other essential workers have done during the coronavirus pandemic this year, people were more focused on the recent reports that DeGeneres treated staff and collaborators poorly.

"Who are the real superheroes? People who treat their staff well?" one person wrote.

Several users also compared DeGeneres to the evil character Nurse Ratched, who first appeared in the 1975 film "One Flew Over the Cuckoo's Nest," and is now the focus of a drama series on Netflix called "Ratched."

The pointed responses to DeGeneres' Halloween content come after a turbulent year for the host, who has been labeled as one of the "biggest villains of 2020."

In April, it was reported that DeGeneres' crew was "furious" about a lack of communication over their pay during the coronavirus shutdown.

Variety cited two anonymous sources as saying that the long-running talk show's core stage crew — which consists of more than 30 employees — had not received any communication about the status of their working hours or pay, and that producers had not checked in about their mental and physical health.

And in July, the show's parent company, WarnerMedia, launched an internal investigation into the show's workplace culture. Variety reported an "employee relations group and a third party firm" would conduct the investigation, interviewing current and former employees about their time on set.

That same month, numerous ex-employees of "The Ellen DeGeneres Show" said that sexual harassment and misconduct ran rampant while they worked there, according to a BuzzFeed News report.

DeGeneres subsequently addressed "issues" at her show with a letter to staff in late July.

In the letter, obtained by The Hollywood Reporter, DeGeneres took responsibility for the overall issues on her set. She did not directly address any allegations of her personal actions but said she was "disappointed to learn" that people working for her did not feel happy or respected at work.

The host doubled down on her comments during the season premiere of "The Ellen Show" in September.

"I learned that things happened here that never should have happened. I take that very seriously," DeGeneres said in her opening monologue. "I want to say I am so sorry to the people who were affected."

"I know that I'm in a position of privilege and power. And I realized that with that comes responsibility," she continued. "And I take responsibility for what happens at my show. This is 'The Ellen DeGeneres Show.'"