Good Morning Britain host and journalist Piers Morgan responded to Gary Lineker’s tweet that defended the recent actions of the Duke and Duchess of Sussex: Prince Harry and Meghan Markle. The host, 54, mocked Gary’s, 59, grammar amongst other things.

Gary tweeted remarks that appeared to sympathise with Harry and Meghan and suggested that people should be more focused on the devastating Australian wildfires.

He tweeted: “Families fall out. It’s hard enough without the whole world judging & haranguing you. Yes, the Royal family is a weird concept.

“A strange job that brings absurd entitlement, but they’re still human beings with foibles and feelings.

“Meanwhile Australia is on fire and war threatens.” 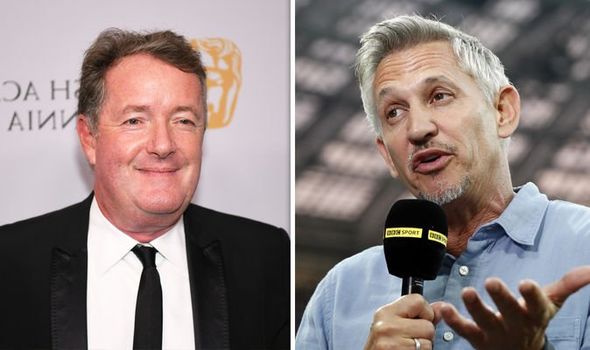 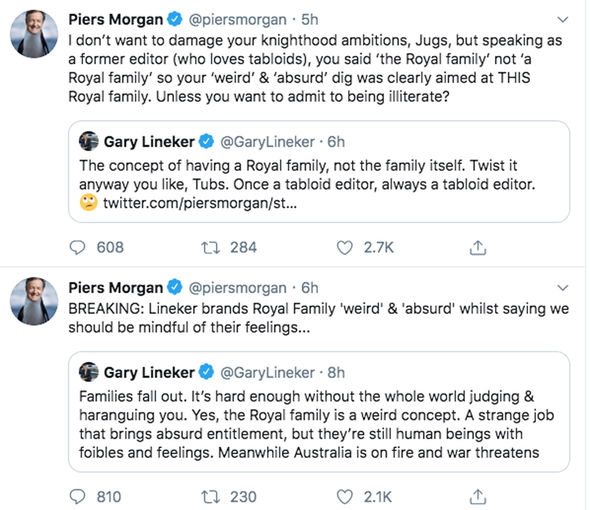 Piers mocked the sports pundit’s words by seemingly inventing a potential headline to his claims.

He responded to the tweet with: “BREAKING: Lineker brands Royal Family ‘weird’ & ‘absurd’ whilst saying we should be mindful of their feelings…”

Gary hit back at his mockery by tweeting that former Daily Mirror editor Piers was trying to “twist” his words. 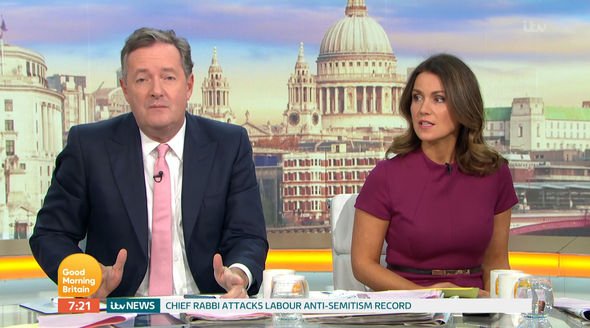 But this only further provoked a defiant Piers who said he hoped his words hadn’t damaged the sports pundit’s “knighthood ambitions”.

Piers hit back for a second time with: “I don’t want to damage your knighthood ambitions, Jugs, but speaking as a former editor (who loves tabloids), you said ‘the Royal family’ not ‘a Royal family’ so your ‘weird’ & ‘absurd’ dig was clearly aimed at THIS Royal family. Unless you want to admit to being illiterate?”

Gary wrote that he didn’t “have any knighthood ambitions” and this Piers’ “obsession” with Prince Harry and Meghan Markle was “most certainly weird”.

The former footballer wrote: “I don’t have any knighthood ambitions. You’re obsession with these two people is most certainly weird.”

DON’T MISS…
Gary Lineker speaks out on Harry and Meghan controversy [PICTURES]
Gary Lineker net worth: How much does the BBC SPOTY presenter earn? [UPDATED]
Gary Lineker left red-faced as fan catches him having sex [INTERVIEW]

This only further fuelled Piers claims of Gary being “illiterate” and he responded a further time by correcting Gary’s grammar with “It’s your’.”

Piers has certainly not held back regarding his opinions on Meghan and Harry’s decision to step back from their royal duties in recent days.

She wrote: “I’m missing something. Harry & Meghan changed job title, WANT to work, not ‘freeload’, earn their own £ and continue w/ their obligations o Queen, country charity, plus build a life they choose and this is a problem because?

“Our taxes don’t come into it.”

“That ain’t happening on my taxpayer watch.”