Following the Queen‘s death last week, Prince William went on to inherit the Duchy of Cornwall from his father King Charles, the former Prince of Wales.

MORE: Why Prince Harry has more medals than Prince William

The Duchy generates a £23million-a-year income and William began his new role on Wednesday by holding a meeting with the Duchy’s finance committee.

According to the Court Circular, William spoke to the Duchy’s finance committee via video link.

As the 25th Duke of Cornwall, William is entitled to the annual surplus generated by the Duchy’s vast portfolio of land, buildings and financial investments. 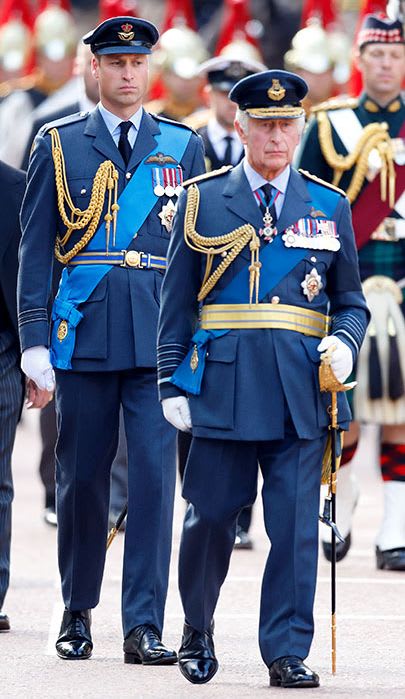 William and enherited the Duchy from his father Charles

He has also taken charge of overseeing the management of the estate, with the meeting understood to be a sign of the seriousness with which takes his new role.

It was an incredibly busy day for the royal family on Wednesday, as they all united to take part in a procession behind the Queen’s coffin as it made its way to Westminster Hall from Buckingham Palace.

In a display of unity, Prince William and Prince Harry walked side-by-side – unlike at the Duke of Edinburgh’s funeral when their cousin Peter Phillips walked between them.

William wore his RAF No1 uniform, a Garter Sash with RAF Pilot Wings and displayed his Garter Star – the most senior order of knighthood in the British honours system, outranked in precedence only by the Victoria Cross and the George Cross.

William, as a future king, was made Knight of the Garter in 2008 by his grandmother; coincidentally, St George’s Chapel is also the mother church of the Garter Order.

Alongside the star, William wore his Platinum and Golden Jubilee Medals, and his Diamond Jubilee Medal, also presented to him by the Queen.