Savannah Guthrie has jokingly thanked her fans for their prayers during a “difficult time” following the news that Roger Federer will retire from professional tennis.

The Today Show star is a huge tennis fans and was heartbroken on Thursday when she heard the news.Sharing pictures of the times she had met him, she called Roger a “great sport, great champion, great human being.”

She then joked: “Thank you for your thoughts and prayers during this difficult time.” Later Savannah took to her Instagram Grid to share a picture of Roger on the show writing: “The Greatest of All Time. Thank you, Roger.”

Friends and family were quick to console her with Jenna Bush Hager commenting: “How are you?? I’ve been thinking about you all day.” Sam Kass added: “I know this is a difficult day for you. We are here to support you @savannahguthrie through this challenging time,” along with laughing emojis.

“Literally thought of you when I saw the news,’ shared one fan.

Roger announced his retirement from the sport on Thursday morning and confirmed next week’s Laver Cup is set to be his final ATP event.

Savannah praised him as the GOAT

Taking to social media on Thursday, the tennis star – who has 20 Grand Slams to his name – addressed his fans: “As many of you know, the past three years have presented me with challenges in the form of injuries and surgeries.

“I’ve worked hard to return to full competitive form. But I also know my body’s capacities and limits, and its message to me lately has been clear. I am 41 years old. I have played more than 1500 matches over 24 years.

“Tennis has treated me more generously than I ever would have dreamt, and now I must recognize when it is time to end my competitive career.” 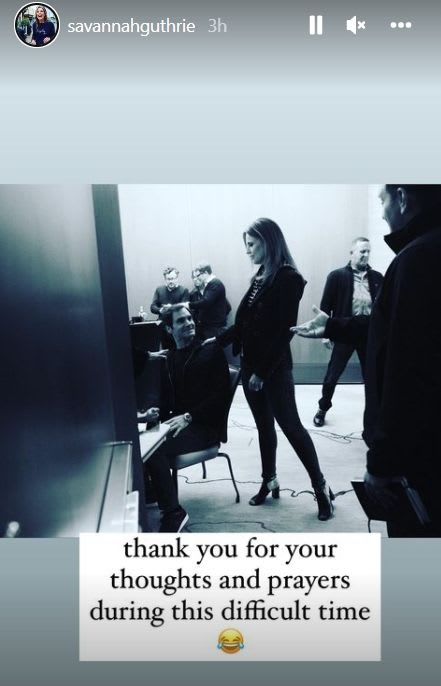 Savannah thanked for fans for their prayers

Roger will join the likes of Andy Murray, Novak Djokovic and Rafael Nadal as they team up on the court when they compete alongside one another at this year’s Laver Cup, which kicks off in London on Friday.

“The Laver Cup next week in London will be my final ATP event. I will play more tennis in the future, or course, but just not in Grand Slams or on the tour,” he added.

Roger, who has not played on tour since last year’s Wimbledon, shares 13-year-old twin girls, Myla and Charlene Federer, and eight-year-old twin boys, Lenny and Leo Federer, with his wife Mirka Federer.

“I would like to especially thank my amazing wife Mirka, who has lived through every minute with me. She has warmed me up before finals, watched countless matches even while over eight-months pregnant, and has endured my goofy side on the road with my team for over 20 years.

“I also want to thank my four wonderful children for supporting me, always eager to explore new places and creating wonderful memories along the way. Seeing my family cheering me on the strands is a feeling I will cherish forever.”