The famed American composer and lyricist passed away ‘suddenly’ at his Roxbury, Conn. home, according to his lawyer F. Richard Pappas, The New York Times reported.

Pappas said that Sondheim had celebrated Thanksgiving the day prior with his friends surrounding him.

Sondheim wrote the words for West Side Story and Gypsy; and the music and lyrics for a celebrated list of shows that include A Funny Thing Happened On The Way To The Forum, Follies, A Little Night Music, Sunday In The Park With George, Into The Woods and Sweeney Todd.

The composer was born on March 22, 1930, to his upper-middle-class parents, Herbert and Janet Sondheim in New York City.

His father was a dress manufacturer while his mother worked in the same industry as a fashion designer and interior decorator.

At a very young age, he studied piano for two years which is where his interest in the musical stage began, and continued throughout his education. 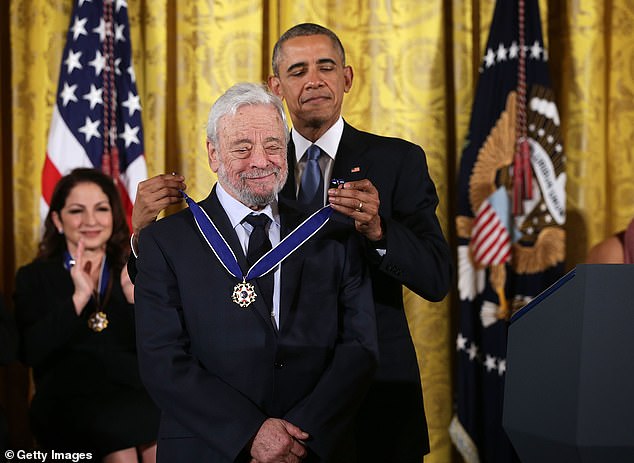 Honors: Above, Sondheim is presented with the Presidential Medal of Freedom by President Obama in 2015