Home » Celebrities » The curse and the blessings of being Melissa McCarthy

The curse and the blessings of being Melissa McCarthy 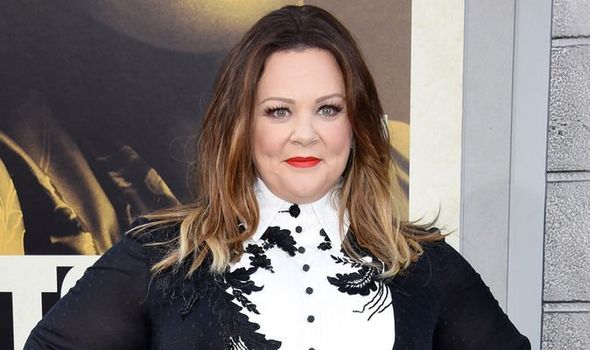 Nothing illustrates the stark contrast between the real-life Melissa McCarthy and the characters she plays than the day she was out walking with her mother, Sandra. The American actress was spotted by one of her many devoted but somewhat over-enthusiastic fans who rushed over to the pair and proceeded to let rip a volley of hardcore expletives.

“Now, I’ve never used a ‘cuss’ word myself in real life, and especially not in front of my mom,” says Melissa. “And this guy comes up and he kept swearing at me because he really wanted me to swear back at him – and then he started swearing at my mom.

“And my mom’s this sweet Mid- Western woman, and he kept saying the F-word in front of her, she was bright red, and I kept saying, ‘Please stop swearing, this is my mom!’ and he just swore some more.

“He meant it as a compliment because he liked the characters I play on screen, but that’s not who I am in life.”

That person is in fact soft-spoken, convent school-educated and raised in no-nonsense Illinois – a million miles away from the uncouth, sweary barrel of slapstick we are more accustomed to seeing on screen.

But, as Melissa explains, much as she enjoys playing characters like sweary, lascivious maid-of-honour Megan in Bridesmaids or vulgar, feisty detective Shannon in The Heat, there is a great deal more to both her character and her acting skills than simply a loudmouth who plays everything for laughs.

In Nine Perfect Strangers, a TV mini-series launching on Amazon Prime today, Melissa plays a best-selling author, who – despite having a few demons – is intelligent, empathetic, and socially adept.

“I feel like one of the luckiest things about what I do for a living is that I get to spend a lot of time thinking about walking through life in someone else’s shoes,” says Melissa. “I hope some of this makes me empathetic to all sorts of different people because even when people are behaving in a way that I don’t like at all, I always try to think – what scares them? Why are they so angry?

“And I try very hard to take a breath and remember that most unattractive behaviour comes out of a fear of not being valued, and I think I’m lucky to be in a job that helps me remember that.”

Melissa, 50, was born on a large farm in Plainfield, Illinois, to Sandra and Michael McCarthy. Her father’s family originally came from County Cork while Sandra’s forebears were also Irish Catholics, with a mix of English and German.

The actress – who recently did a double act with the Duchess of Sussex in a charity appeal video for Meghan’s 40th birthday – wanted to be a designer and moved to New York City to attend the Fashion Institute of Technology. Instead she started doing stand-up and joined The Groundlings, a comedy troupe based in Los Angeles which is where she met her husband, filmmaker, comedian and actor Ben Falcone.

Her cousin is actress and onetime Playboy model, Jenny McCarthy, and Melissa made her TV debut opposite her in the NBC comedy series Jenny in 1997.

From there roles portraying funny, klutzy girls in rom-coms followed until in 2011, she landed her breakout performance in Bridesmaids for which she received her first Academy Award nomination. She got a second in 2019 for the drama Can You Ever Forgive Me?. Bridesmaids saw her reunited with husband Ben, but Melissa famously banned their daughters, Vivian, 14, and Georgette, 11, from seeing a hilarious mock-sex scene the couple performed in one of Bridesmaids’ outtakes. “We’re a good pairing,” Melissa says contentedly of her husband. “He’s a calming guy – although he’s very funny, he’s also very much an even Steven, so no matter what the situation is, he knows he can deal with it.

“I’m not like that. I’m, like, ‘Aaauugh! What are we gonna do?’ I’m all big reactions and up and down, and he’s always just, like, ‘Something will work out, we’ll figure it out’, so we’re good for each other like that.”

Although their work inevitably involves travel, the two have a rule that if they can possibly avoid it, they will not spend more than two weeks apart.

“We don’t like to go longer than that,” she says, firmly.

“And I know that people have to, and that some day we probably will have to do so too, and that will be really challenging, but we’re fighting it.

“I like my husband a lot. I married him to be with him, and vice versa, so we try to spend as much time together as we can.” But while Melissa may not be as shouty and slapstick as her best-known roles, she does admit that the physical comedy of her screen persona can sometimes leak into real life.

“I was in a store dressing room recently where I got trapped in a sundress,” she admits. “My slip was connected to the wrap dress and I’d tangled myself up in it and I must have been in there like 35 minutes because I could not get it back.

“I literally was in a full sweat and almost crying because I was thinking, ‘I’m going to have to ask a stranger to come in and help me with this’. I made it out in the end… but it was a mess at the time.”

It is a situation with which every woman who has struggled with extra curves can sympathise. Melissa has lost some weight since the Bridesmaids days – she politely refuses to go into details of exactly how much – but has accepted that she will never be thin.

“But I’m wildly healthy,” she points out. “I do Pilates, I cut the caffeine at two coffees and try to do all that stuff. But all of that pales in comparison to what I think is the real secret to health, which is that, wherever I am, I try to be present.

“I put a real effort into putting down my devices when I don’t absolutely need them. It’s hard in this age not to confuse technological connections with actually being seen and heard by someone else.

“So my thing is, when I get home I put my phone into my purse (handbag), my purse goes into the closet and it stays there.

Probably some people don’t like that because it means I’m harder to get in contact with. But I want to come home at the end of the day and whoever I’m going to be with, whether it’s Ben, or my daughters, or whether we have friends coming over, I really, really want to be with them.

“Especially these days, when we’re all reimagining the world.

“I think those moments when you get to be with someone else are more important than they’ve ever been.” She says this is not the only way in which motherhood has changed her. “I can’t watch horror movies any more because I just think there’s so much danger floating around in the real world, I don’t need to amp it up.

“Being a parent changes you on so many levels.Your kids hold a mirror up to you, and that’s a good thing because when they come along, you’re never comfortable again – and I mean that in a good way. It makes everything to spend in life so much better, so much scarier, so much a case of ‘My God, am I doing it right, am I saying it right, and what will they remember when they’re 30?'” Chances are, one thing the Falcone daughters will remember into adulthood is the maths lessons their mum gave them during the lockdown.

“I really enjoyed those,” says Melissa, proudly beaming proudly. “Math is something you can get right, so you feel like you get a prize at the end of it, like finishing a crossword puzzle.

“I think I enjoyed teaching math to my youngest a little too much, in fact.

“I really got into it, I made slide shows, and both my girls were, like, ‘Oh, my God, just wrap it up, McCarthy!'”

When Melissa isn’t working or helping out with homework she can usually be found either with her head in a book – “but it has to be a real book,” she cautions, “I will put a few on my iPad if I’m travelling but I’d much rather have a real book because I want to turn the page, I want to put the jacket on, I want to use a book marker” – or shopping for antiques.

“I love things with a history and a past. I don’t need things to be perfect, I just want to imagine the history of them, like, ‘Where has this weird Spanish brass boot that has held umbrellas been?’

“I’m not a big brand-new person. I’d rather have vintage stuff in my house. But nothing valuable. I have kids and dogs so it can’t be too precious!”