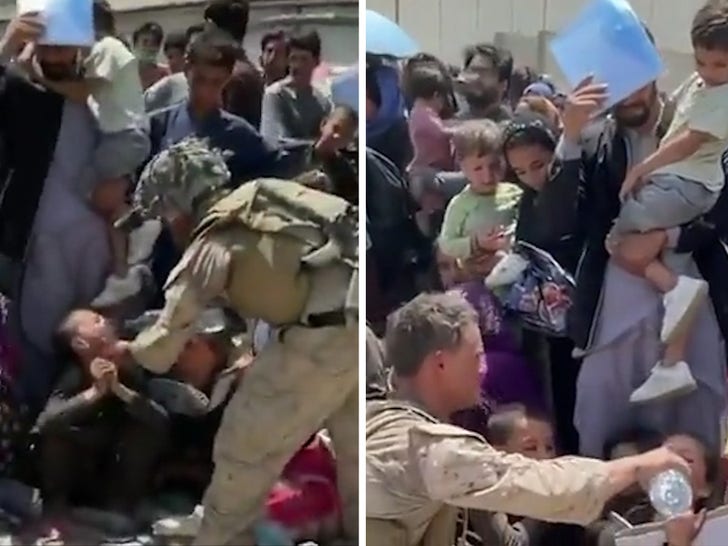 Despite the hellish scene in and around Afghanistan in recent weeks, here’s a snapshot of some humanity at its finest … a Marine giving kids water as they wait to be evacuated.

Check out this sweet clip of a soldier on the ground in what appears to be Kabul — where a majority of the load-and-go’s have been happening. He’s going around pouring H2O into the mouths of several thirsty Afghan children … straight from his own water bottle.

Not much talking is happening here — it’s all body language, and the kiddos get the drill … opening up and letting the guy waterfall for a couple seconds each. It’s both heartwarming, but also sad … presumably, there isn’t much fresh water to go around at the moment.

It’s just an example of U.S. forces there still doing the hard work of trying to get people out ASAP … while also maintaining a good attitude and trying to keep things light, especially with the little ones. Different photos have emerged showing exactly that within the walls of the Kabul Airport, where different military personnel are interacting with locals.

Of course, it’s not always as rosy as this one moment was — there are several videos that are way more tense … with U.S. troops trying to maintain order among those seeking to flee, in some cases needing to apparently fire warning shots in the air for crowd control.

Still, when they can … seems the men and women of our armed forces are doing their best to keep the peace and follow orders — namely, to keep up the steady stream of flights out of there going as efficiently and safely as possible … with Taliban lurking everywhere.

The White House says that between Saturday and Sunday, about 8,000 people total have been evacuated between dozens of flights that are being provided by the U.S. military, allies and even some commercial airlines who’ve stepped up after President Biden called for help.

All in all, the WH says a little more than 25,000 people have been evacuated from Afghanistan since August 14.