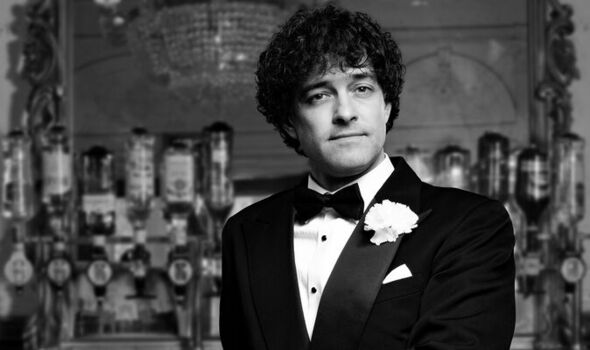 “We did manage a date at the London Palladium last June,” he says, “which was incredible.” He had also been cast alongside Sherrie Hewson and Les Dennis in a six-month tour of Kay Mellor’s Fat Friends, based on her hit TV show. “But it was pulled at the last moment. Such a shame. It’s so rare to get a funny musical.”

There is talk, though, that it might resurface next year.

In the meantime he is joining the tour of Chicago in Sunderland this month, playing slimy lawyer Billy Flynn alongside Faye Brookes.

Tousled-haired Lee must have been chuffed to land the role.

“I have my actor friend Dan Burton to thank for that. He’d played Billy and he said I ought to turn up at the audition in full tuxedo, dickie bow tie, my hair slicked down with lashings of lacquer.”

The tour ends in the last week of July in Llandudno. “It’s going to be an intense two months.”

In 2007 Lee won the TV talent show Any Dream Will Do, landing the lead role in Joseph And The Amazing Technicolor Dreamcoat.

No stranger to hard work, he went on to star in West End productions like Wicked, Legally Blonde, Phantom Of The Opera and Chitty Chitty Bang Bang.

He was then cast as Ben “Lofty” Chiltern in TV’s Casualty, a part specifically written for him. There was a break after two years but then his character popped up for another three in the hospital drama’s sister series, Holby City.

Lee, 40, says he would have stayed with Casualty longer, but his daughter, Betsy, was four and five at the time. “I’d see her every weekend and sometimes for a couple of days in the week. But I was missing the school runs and you don’t get those years back.

“Leaving a primetime show was the hardest decision I’ve ever made, professionally speaking, but I’ve never regretted it. It was the best thing I could have done.

“For seven months Betsy was at the centre of my world again.”

His adored daughter is the product of his short-lived marriage to TV presenter and actress Denise Van Outen, 48.

She had been a judge on the Joseph talent show, where the two fell in love and married in 2009.

It is fair to say Lee was bewitched, but four years later the relationship had unravelled.

By the end of a panto run in January 2020 – five solid weeks playing Aladdin a dozen times a week – he had also become disillusioned with the industry.

“I needed to recharge – I’d come to a crossroads. I’d worked more or less continuously for 20 years.

“I was seriously contemplating giving it all up.” To do what?

A shy laugh. “To open a coffee shop in St Ives. Silly, I know, and I couldn’t have turned my back on Betsy. I wasn’t thinking straight.”

Now, he says, he’s got his mojo back. He’s rested, his career is on the up again and he’s in love. He first met Issy – he prefers not to reveal her surname – when both were in a cafe waiting to pick up their children from school.

He has always made a point of not discussing his break-up with Denise. Now, he confines himself simply to saying: “Sometimes, two people, for whatever reason, are meant to be just friends.

“Like any marriage, I went into it with the best of intentions. But I’ve never talked about the break-up and never will.”

Does Denise feel the same? A cloud crosses Lee’s otherwise sunny face. “Oh no, she’s talked about it openly,” he says, and you do not need to be a mind reader to work out what he thinks about that.

“It makes it harder when you both have a public profile and it’s all over the front pages.” But that’s all water under the bridge.

Betsy, now 12, lives in Chelmsford with her mother, not far from Lee’s new flat. “I have her every other weekend and she’s with me two days a week as well as half the school holidays.”

It was while Lee and Denise were living in a village in Kent that he first saw Issy, 32. But it was a considerable time after his marriage that he found himself having coffee with her. A single mother and striking looking, she could be Denise’s younger sister, something Lee bridles at when I suggest it.

“Oh, I don’t think my girlfriend would like being compared with my ex-wife,” he says.

The two hit it off from the start. “We held hands on our first proper date in Tunbridge Wells and it felt like the most natural thing in the world. I knew then that this could be something special.

“It’s too easy to go off the rails, to reach for a bottle of booze or recreational drugs. It’s also easy to start believing the hype about yourself. But none of that is me.”

However, he reveals the first date was almost torpedoed before it had even got off the ground.

“I had flu and very nearly cancelled. But I didn’t want Issy to think I was blowing her out.

“I’d also managed to spill red wine on my crisp white shirt after I’d decided I needed a bit of Dutch courage before we met. And then I coughed through the whole meal.

“But, slowly and cautiously, it grew from there. We’re on a lovely journey together. It’s hard now to imagine her not being in my life.”

In 2014 Denise was with commodities trader Eddie Boxshall, 48. But the relationship hit the rocks at the beginning of this year when she discovered he had been sending inappropriate texts to other women.

Was Lee able to offer her any crumbs of comfort?

He shoots back into his shell faster than a salted snail

“That’s a personal matter for her. It would be inappropriate for me to get involved.

“The one area where we’ll always overlap, though, is our daughter. I like to think we’re really good parents.”

Issy and son Alfie live in Kent, where she runs a beauty business and where Lee spends half his time.

So what makes Issy The One? That shy smile again.

“Well, we’ve got the same sense of humour for a start. She’s very family-oriented which I like.

“And I admire the way she’s kept her life together. She’s a very disciplined, organised kind of a person.”

Seven years ago, he never thought he would say this again.

“I feel very blessed, very lucky. “Not so long ago I went to LA to audition for a part in a TV series.

“I got down to the last three or four and the money was silly.

“Then my manager sat me down one day. Did I realise, he said, that if they gave me the job I’d have to sign a seven-year contract and film for nine, ten months a year?

“Was I happy with that? I didn’t even hesitate. I was on the first flight back to England. I needed to be with the people I loved.”

He continues: “I have a favourite question I put to my daughter. I’ll say, ‘Betsy, what’s Daddy’s best time in the whole world?’ And she’ll answer, ‘Spending it with me’.

“It means I have someone who I prize above my own life. All that and I’ve been given a second chance when it comes to Issy.”