The story of Yasuke—a Black samurai warrior who defended feudal lord Oda Nobunaga in his campaign to unify 16th century Japan—has been on the Hollywood wish-list for some time. Two years ago, Chadwick Boseman was set to play Yasuke in a live action retelling of the story. After Boseman’s death, the project appears to have been cancelled. At the same time, however, American animation producer LeSean Thomas, having been first exposed to the story a decade earlier, signed a deal to co-produce an animated adaptation of the story for Netflix. He signed on with actor LaKeith Stanfield (who voices Yasuke) and musician Flying Lotus (who scores the series).

Thomas felt that despite some previous Japanese adaptations, Yasuke had never before been fully humanized. He also knew the character was something American audiences had been craving. “Japanese anime has become very popular among Americans and in particular the African American community,” Thomas told Wired in an interview. “And there’s a lot of back and forth among fans about, you know, individualism and xenophobia in Japan. I felt like, who can refute this guy who actually served one of the most important figures in Japanese history?”

The Netflix series follows the story faithfully—robots and magic aside—and likely drew from recent historical accounts such as Thomas Lockley’s African Samurai: The True Story of Yasuke, a Legendary Black Warrior in Feudal Japan. Lockley spent nearly a decade researching the work. He told CNN in 2019 he expected the story to gain resurgence. “There’s still a kind of romance and mystery to the story of someone who escaped slavery and was raised to foreign heights next to the prime ruler of Japan. It feels like the age where he’ll get the attention he deserves.”

The age has come. Here’s what to know about the true story of Yasuke and Oda Nobunaga.

Chronologically, the documented story of Yasuke—both in real life and in the Netflix series—begins in Kyoto in 1581. While there may not have been an epic street fight, Yasuke, nevertheless, caught to the attention of Oda Nobunaga, one of Japan’s most powerful warlords. At the time, Japan had already experienced a political power vacuum for over a century, with near-constant civil war between feuding clans. (This period is known by historians as the Sengoku period, which would last until 1615.)

By 1581, Nobunaga and his Oda clan had established a temporary rule over the country, hoping to finally unify the clans. When Nobunaga met Yasuke, he thought the African slave might be a god. Yasuke had been brought to Kyoto by Jesuit missionaries; Yasuke was Italian missionary Alessandro Valignano’s valet and bodyguard. Yasuke’s origins are not as well documented, though author Thomas Lockley believes Yasuke was likely abducted as a child and trafficked through Arabia by slave traders before the Jesuits hired him.

What is known, however, is that Yasuke’s appearance in Japan caused a fervor. “When Yasuke got to Kyoto (with Jesuit missionaries), there was a massive riot. People wanted to see him and be in his presence,” Lockley explained in an interview. 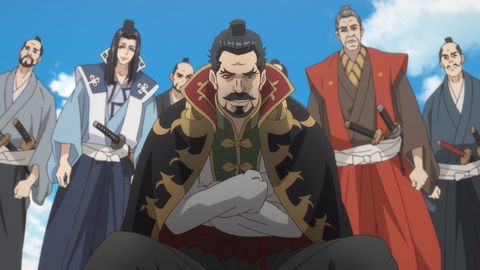 As in the series, Nobunaga attempted to rub off Yasuke’s black skin, believing it to be some kind of ink. When he realized this assumption was false, Nobunaga threw Yasuke a feast. He then made Yasuke, who was likely trained already as a soldier, into a samurai.

Yasuke trained and likely acquired martial arts and sword skills, as well as picking up the Japanese language. Yasuke’s first military campaign under Nobunaga came in 1581 when the clan alongside as many as 60,000 men attacked the mountainous Iga province.

In 1582, Nobunaga’s general, Mitsuhide Akechi, attacked Nobunaga at his home in Kyoto. The ensuing battle would crush Nobunaga’s plans to unify Japan. It also resulted in Nobunaga’s death. He was forced to commit “seppuku” (also called “harakiri”), a ritualistic suicide involving self-disemboweling. Some accounts suggest that Yasuke was present for the suicide and was even asked by Nobunaga to take his decapitated head to his family.

After the battle, there are few records about Yasuke. He simply became a “ronin,” or a samurai who lacks a master. This is also the title of the Netflix series’ first episode.

based, Is, On, Yaskuke
Celebrities