Though Hollywood nepotism definitely played a role in the rise of actor Zoe Kravitz — her parents are none other than Lisa Bonet and Lenny Kravitz, after all — Kravitz has proven she’s a star in her own right. From nabbing the role of Catwoman in the highly anticipated film “The Batman” alongside Robert Pattison, per Deadline, to playing the main character in Hulu’s “High Fidelity,” and co-starring in HBO’s mega hit “Big Little Lies,” per IMDb, Kravitz is taking Hollywood by storm.

And when she’s not making headlines for her work, the actor is usually in the tabloids because of her love life. Kravitz shocked fans when she announced her divorce from Karl Gulsman early this year after only being married for a year and a half. She’s been back in the spotlight because of her new relationship with her alleged beau, actor Channing Tatum.

While Tatum and Kravitz both appeared on the Met Gala red carpet (separately, per Page Six), Kravitz turned heads at the September 13 event for one reason alone: her daring and edgy dress. Read on to learn more.

Zoe Kravitz wasn't afraid to bare it all 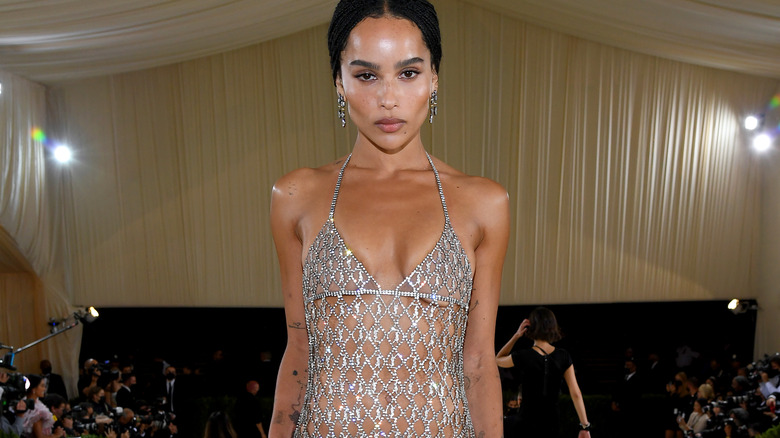 Zoe Kravitz  got up close and personal at the 2021 Met Gala. The theme of the night, according to Vanity Fair, was American Independence, and the actor did not disappoint. Fans took to social media to express their approval of her outfit, with one saying she served “perfection.”

Kravitz looked stunning in a sheer Saint Laurent dress by designer Anthony Vaccarello, as noted by People. The gown was quite revealing as it was netted with crystals, exposing Kravitz’s entire backside, including her silver thong. This was the actor’s fourth appearance at the Met; in 2019 she wore another Saint Laurent dress by the same designer, according to People. That dress, however, wasn’t nearly as risquè as this year’s.

Kravitz may have turned heads in her sparkly outfit, but her relationship with rumored boyfriend Channing Tatum dominated the discourse surrounding the event. Both actors attended the event, though they arrived separately and didn’t pose for any photos together. But according to Entertainment Tonight, Kravitz and Tatum were very affectionate with one another during the after party, fueling the rumors of their blossoming relationship. Who knows, maybe next year Kravitz and Tatum will attend the event together as a couple.