Home » Fashion » A Spiritual Meeting in the Sand and a Wedding There, Too

A Spiritual Meeting in the Sand and a Wedding There, Too

On the morning of April 24, Emily Arnold and Youssef Ait-Khouya walked over the dunes at Coral Pink Sand Dunes State Park outside Kanab, Utah, chose a spot to get married and began accessorizing it. They laid down Moroccan rugs and pillows, set up a portable table and decorated it with vases of flowers, a tea set and Moroccan lanterns. The surrounding dunes were continually changing shape because of the near-constant wind. A sign inside the park reads: “When you left your car in the parking lot, you left stability behind.”

Before the wedding began, the wind really picked up. “Where’d the rug go?” asked the bride, who was wearing a taupe tulle gown, a sparkly capelet and glittery sneakers. The small rug the couple intended to stand on while saying their vows was now buried in the fine, yam-colored sand.

Ms. Arnold, 34, grew up in a Mormon family in South Jordan, Utah, and was known for being studious and devoutly religious, but also venturesome and independent. “Super duper” is one of her favorite phrases and one of her favorite books is “I Married Adventure” by Osa Johnson. “I loved the idea of wanting to marry adventure, not just marry the boy next door or somebody from school,” she said.

In 2007, as an undergraduate at Utah State University, she spotted a flyer advertising a trip to Europe and signed up. “I spent a month abroad as the only Mormon, the only conservative girl, on a bus of 20-something kids who were there to party,” she said. “I hadn’t been exposed to people who were drinking or didn’t believe in God.” She tasted alcohol for the first time, something she confessed to her parents. “They were like, ‘I can’t believe you would do that,’” she said. “‘I can’t believe you would push the envelope like that.’” 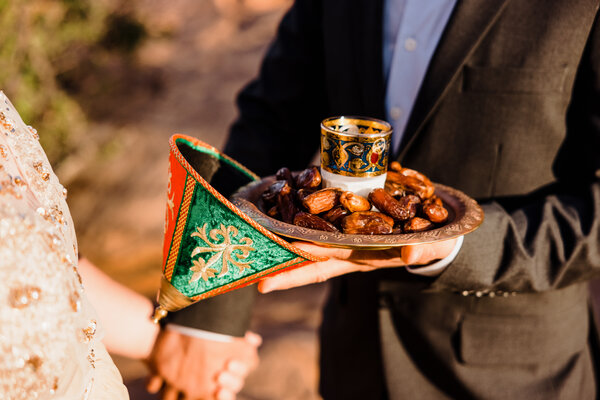 After that, she began traveling as often as she could. “I was always looking for foreign connections and friendships that could show me humans were the same everywhere,” said Ms. Arnold, who now lives in Richmond, Calif., and is an assistant director of volunteer programs at the University of California, San Francisco.

In September 2017, she and a friend were traveling in Europe and trying to decide how to spend the last few days of their trip. “We drew straws: a road trip around Spain or ride camels in Morocco?” Ms. Arnold said.

Soon, they were atop camels in the Sahara with Youssef Ait-Khouya as their guide. Ms. Arnold disliked riding a camel — “I was super duper saddle sore,” she said — but she liked Mr. Ait-Khouya.

That night, the two stayed up late talking around the campfire. “I asked him, what is your favorite place in the world and he said, ‘My favorite place is earth.’ That really struck me. I was like, ‘Oh, mine too!’” She added, “I thought he was cute, but I wasn’t like, ‘Oh, I want to go kiss this guy out behind the tents.’”

Mr. Ait-Khouya thought Ms. Arnold was “exceptional,” he said, more open-minded and curious than most tourists. “I liked the way she looked and the way she talked and her opinions,” he said. Mr. Ait-Khouya, 24, grew up in the desert in southeastern Morocco in a nomadic Muslim family. “Our life was moving from place to place looking for plants for our animals,” he said. They usually lived in tents, though they would sometimes build a small adobe shelter that he described this way: “It doesn’t even have a door. You just leave it and someone else can use it.” By the time he met Ms. Arnold, his family had settled in Merzouga, a small village near the Algerian border, and he was about to resume his studies at Moulay Ismail University in Meknes, Morocco. He graduated with a bachelor’s degree in English in 2019.

[Sign up for Love Letter and always get the latest in Modern Love, weddings, and relationships in the news by email.]

A few days after Ms. Arnold returned to California, he sent her a message via Instagram. Ms. Arnold replied right away and the two were soon getting together every day on WhatsApp. “We talked about everything, really,” she said. “Where we live, goals we have, places we want to travel. One of the first questions he asked me was, ‘How many kids do you have?’ I said, ‘I don’t have any kids. I have to find their father first.’” At one point, he sent her a photo of her name which he had scrawled in the sand, the equivalent of carving initials in a tree only far less permanent. “I could tell he kind of liked me,” she said.

In March 2018, they made a plan to meet again, this time in Marrakesh, Morocco. She arrived past midnight and found Mr. Ait-Khouya waiting for her outside the apartment they had rented, holding a single rose. “We had a hug outside but when we got in the elevator, I said, ‘I need another hug,’” he recalled.

Again, they stayed up late talking. “I remember falling asleep when we heard the first call to prayer, early morning around sunrise,” she said. “It felt super duper natural.”

She visited him again in Morocco in October 2018, and in March 2019, when he introduced her to his family. “I was very nervous because the mother’s approval is very, very important in Moroccan culture,” Ms. Arnold said. “She was as gracious and lovely as Youssef.”

In November 2019, he proposed while they were traveling in Bali. “We decided we wanted to have a special engagement that we will remember for the rest of our lives,” he said. “She suggested Bali in Indonesia. I’d never heard of Bali.’’ Ms. Arnold, who is known for her take-charge personality, picked out her own ring, a conflict-free diamond in a rose gold band with a similar hue to the Sahara. “I gave it to him on the first day of the trip and said, ‘Here, you can surprise me whenever you want,’” she said.

On Feb 13, Mr. Ait-Khouya arrived in the United States with a fiancé visa and moved into Ms. Arnold’s condominium in Richmond, where he began brainstorming ideas for his own business, possibly organizing tours to Morocco or designing websites. Easygoing and usually smiling, he said the only issue he’s had adjusting to his new home is trying to figure out how to cook with a tagine (a clay pot) on an electric stove versus over a fire.

They had two weddings — a civil ceremony on Feb. 26 at the Contra Costa Superior Court in Martinez, Calif., led by Stephany Alvarez, a former deputy commissioner of civil marriage in Contra Costa County, Calif., and the one on April 24, where they led their own ceremony in the dunes. Although the wind and sand may have been annoying to some people, it was comforting to Mr. Ait-Khouya. “My favorite color is sand,” he said. “That’s the best color for my eyes to see. It feels like home.”

There were six guests, all members of the bride’s family. They watched as the couple said their vows while standing next to an A-shaped wood structure. “It had a lot of shape symbolism for us,” the bride said. “The symbols of mountains, dunes, a tent.”

Mr. Ait-Khouya wore a gray suit for the ceremony and later changed into his idea of more comfortable clothes: a black turban, cobalt blue caftan, gray pants and yellow slippers. He began his vows with “My beautiful Emily,” as if he were reading a letter to her. He called her “a woman of integrity, intelligence and strength” and promised to cook “tasty and juicy” food for her, keep her cold feet warm at night and make her laugh. In her vows, Ms. Arnold said, “Just as this landscape was shaped by wind and water, I know that our life together will become even more beautiful as we weather life’s storms.”

Then, the groom held up a soda bottle containing sand he’d collected from the Sahara while the bride held another bottle she said was filled with “gypsum, crystals and soil” from Price, Utah, where her grandparents live. They poured the two into a glass vase, symbolizing the mixing of their different lands and lives.

At the end of the ceremony, Rebecca Vogel, the bride’s sister who married a fellow Mormon and lives in Utah, gave a short speech. “I’ve always admired your love for adventure and your courage,” she told the bride. “I’ve also found myself jealous of your travels.”

She added, “Now, you two go off and conquer the world.”

The Reception After the ceremony, the small group sat in the dunes and opened a cooler full of sandwiches for lunch. “They will really be sandwiches today,” said Brent Arnold, the bride’s father. The groom passed around dates and poured tea but it was a short-lived picnic. “We got blown away,” the bride said.

The Cake Ms. Vogel, the bride’s sister, made the Neapolitan wedding cake, which was almost a foot tall and echoed the colors of the surrounding landscape. Ms. Vogel also gave the couple a binder full of letters from other family members and far-flung friends who couldn’t attend the wedding.

Their Different Religions They don’t seem particularly concerned about it. “I don’t know how our religious traditions will intersect going forward,” Ms. Arnold said. “We’re both pretty spiritual people and will definitely implement spirituality into our lives.”

The Honeymoon A road trip back to California.