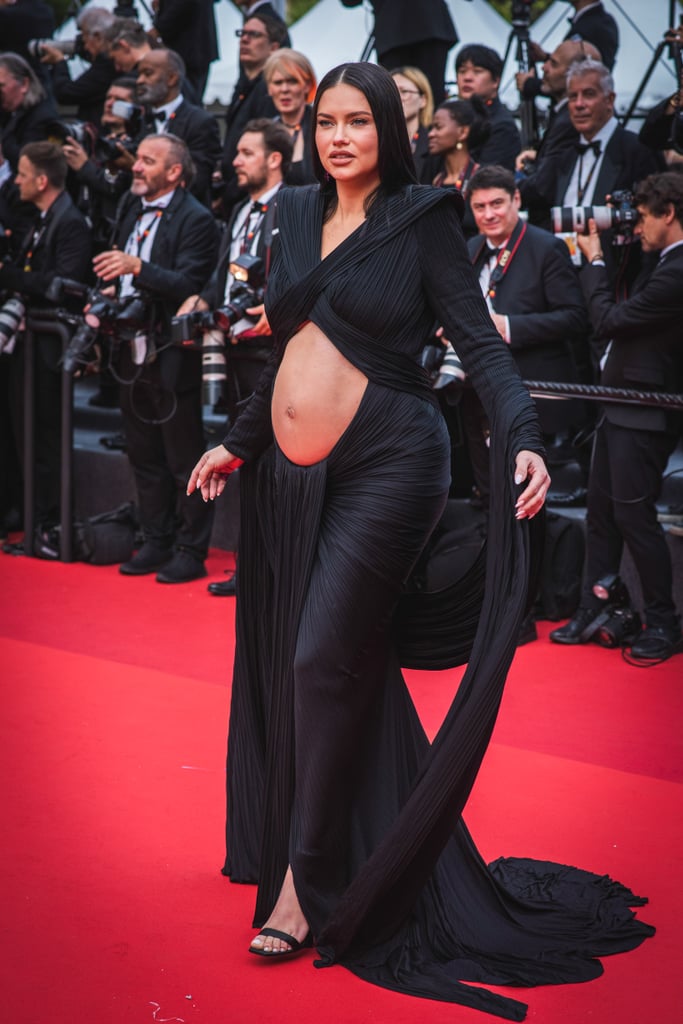 Adriana Lima brought two special guests to the Cannes Film Festival on Wednesday, May 18. Walking the red carpet alongside boyfriend Andre Lemmers, Lima put her baby bump on full display in a custom black Balmain gown with a prominent front cutout. The romantic maternity style was draped from a pleated fabric that extended from Lima’s sleeves to the floor, meeting the elegant train that took shape behind her. Her dress featured structural shoulder pads and a crisscross neckline that accentuated her stomach, making her baby bump the star of the show. Lima styled the look with amethyst drop earrings, a matching ring, and strappy black sandals with gold heels.

Meanwhile, Lemmers — dressed in a navy-blue two-piece suit — posed for the cameras, at some point cradling Lima’s stomach with one hand and hugging her from behind with the other. In addition to these affectionate gestures, the couple also shared a few sweet kisses. Lima and Lemmers made their relationship red carpet official at the Venice Film Festival in September 2021. In a TikTok video shared on Feb. 18, the model announced that she was expecting her third child. “Andre likes to scare me . . . but today is payback!” she captioned the video of herself holding a positive pregnancy test as Jackie Wilson’s “(Your Love Keeps Lifting Me) Higher and Higher” plays in the background. Alongside photos of her ultrasound, Lima and Lemmers also revealed her due date to be sometime in fall 2022. Lima currently has two children — 12-year-old Valentina and 9-year-old Sienna — from her previous marriage to former professional basketball player Marko Jarić.

Lima seems to be following Rihanna’s lead with this bold pregnancy look, and with the singer’s recent birth announcement, we will have to look to Lima for more maternity style inspiration.

See Lima’s designer maternity dress from all angles ahead.