It was a tale of two cities, with the red carpet for this year’s Emmys stretching from London to Los Angeles with predictable fashion results.

Guests at the US ceremony adhered to Hollywood glamour, while the British outpost, populated by The Crown cast, indulged in unbridled European experimentation. 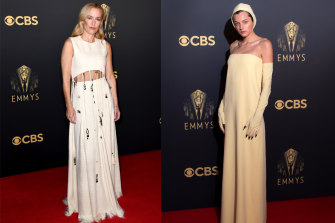 The Crown’s Gillian Anderson in Chloe and Emma Corrin in Miu Miu at the Emmys ceremony in London.Credit:AP

Well and truly in the lead, non-binary actor Emma Corrin sprinted out of Princess Diana’s looming shadow in a potentially restrained creation from Miuccia Prada’s label Miu Miu. On its own the monastic column dress in a biscuit shade was an example of understated chic, but paired with a cap that could have been stolen from the set of The Handmaid’s Tale and fingerless gloves with a deadly, claw-like manicure, it was startlingly original.

Emmy-winner and Corrin’s The Crown co-star Gillian Anderson also entered neutral territory, with a cropped ivory dress from Chloé designer Natacha Ramsay-Levi, but across the Atlantic the preference was for solid colours sampled from the rainbow spectrum, stopping off at fluorescent shades for Kaley Cuoco in Vera Wang and I May Destroy You’s Michaela Coel in cropped Christopher John Rogers. 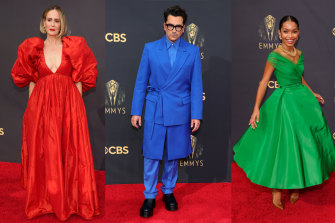 Sarah Paulson in Carolina Herrera, Dan Levy in Valentino haute couture and Yara Shahidi in Christian Dior at the Emmys.Credit:AP/Getty

Emerging through the saturation was the welcome return of black outfits. For years black has been ignored, with stars fearing that they may be mistaken for headset wearing ushers or the waiter they once were. 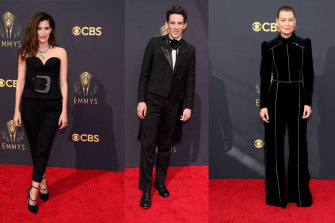 Grey’s Anatomy veteran Ellen Pompeo in an Elie Saab jumpsuit with Renaissance shoulders and diamante details, WandaVision’s Kathryn Hahn in a Lanvin jumpsuit with a statement buckle stood out from the service staff. Mare of Easttown’s Kate Winslet ignored the jumpsuit memo and played safe in a tastefully plunging gown from awards fall-back Armani that provided the perfect backdrop for her trophy.

The Crown’s Josh O’Connor gave black tie a twist in luxury label Loewe, with subtly turned down peak lapels, dramatic tails and a floral neckpiece. The character he played, Prince Charles, wouldn’t be caught dead wearing it at Trooping the Colour, making it perfect for the Emmys. 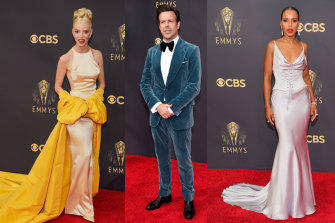 It was part of the exodus away from uniformity for men, with Pose’s Billy Porter playing his familiar game with gender in a ruffled pantsuit by Ashi, reminiscent of Lena Horne and Emmy-winner Jason Sudekis sweating it out in a blue velvet suit by Tom Ford.

The exodus away from old school Hollywood glamour is taking a slower route for some.

Anya Taylor-Joy in slinky Christian Dior haute couture and Kerry Washington in even slinkier Etro could have both been chauffeured off the set of a ’30s film set for their close ups, while Catherine Zeta Jones clung to the ’00s formula of strapless dress with a prominent leg slit.

Michaela Jae Rodriguez was making history as the first transgender Best Actress in a Drama nominee in Emmy history but her teal Atelier Versace gown with Bulgari jewellery also stuck to the rules. 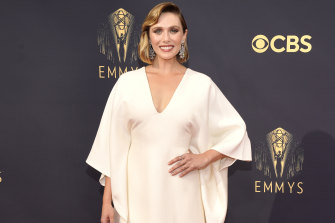 Elizabeth Olsen wearing The Row at The Emmys.Credit:AP Photo/Chris Pizzello

The smattering of crop tops was a tentative shift forward but WandaVision’s Elizabeth Olsen offered a simpler path, without the need for ab crunches, in a dramatic cream robe from The Row, the label operated by her twin sisters, former tween sensations Ashley and Mary-Kate Olsen.

A dash of European flair with American ease, that produced a truly international result.