It is undeniable that designer Kim Jones has defined a new aesthetic for Dior men’s since he took over the creative direction of the brand in 2018. His confident understanding of traditional men’s wear, his refusal to conform with outdated and overly conventional men’s style rules and his respect for Dior’s heritage codes, including the house’s couture legacy, has allowed him to connect with consumers from all over the world. His rolodex of uber famous personal contacts happily willing to wear his creations — including David Beckham, K-pop music group BTS and fashion loving musician Maluma, to name a few — hasn’t hurt, either.

As part of his fashion genesis, Jones collaborated from the beginning with some of fashion’s close relatives in the contemporary art world. Teaming with artists like Kaws and Kenny Scharf, Jones has used his platform each season to inspire and educate a new generation through graphic storytelling, and in doing so giving an intellectual seal of approval to his creations. For fall 2021, Jones collaborated with Scottish-born painter Peter Doig. The blend of Dior’s couture elements, Doig’s rich visual repertoire and Jones’ mastery of ceremonial military uniform construction was this season’s proven success formula. Here are our top five looks that define fall 2021 Dior Men: 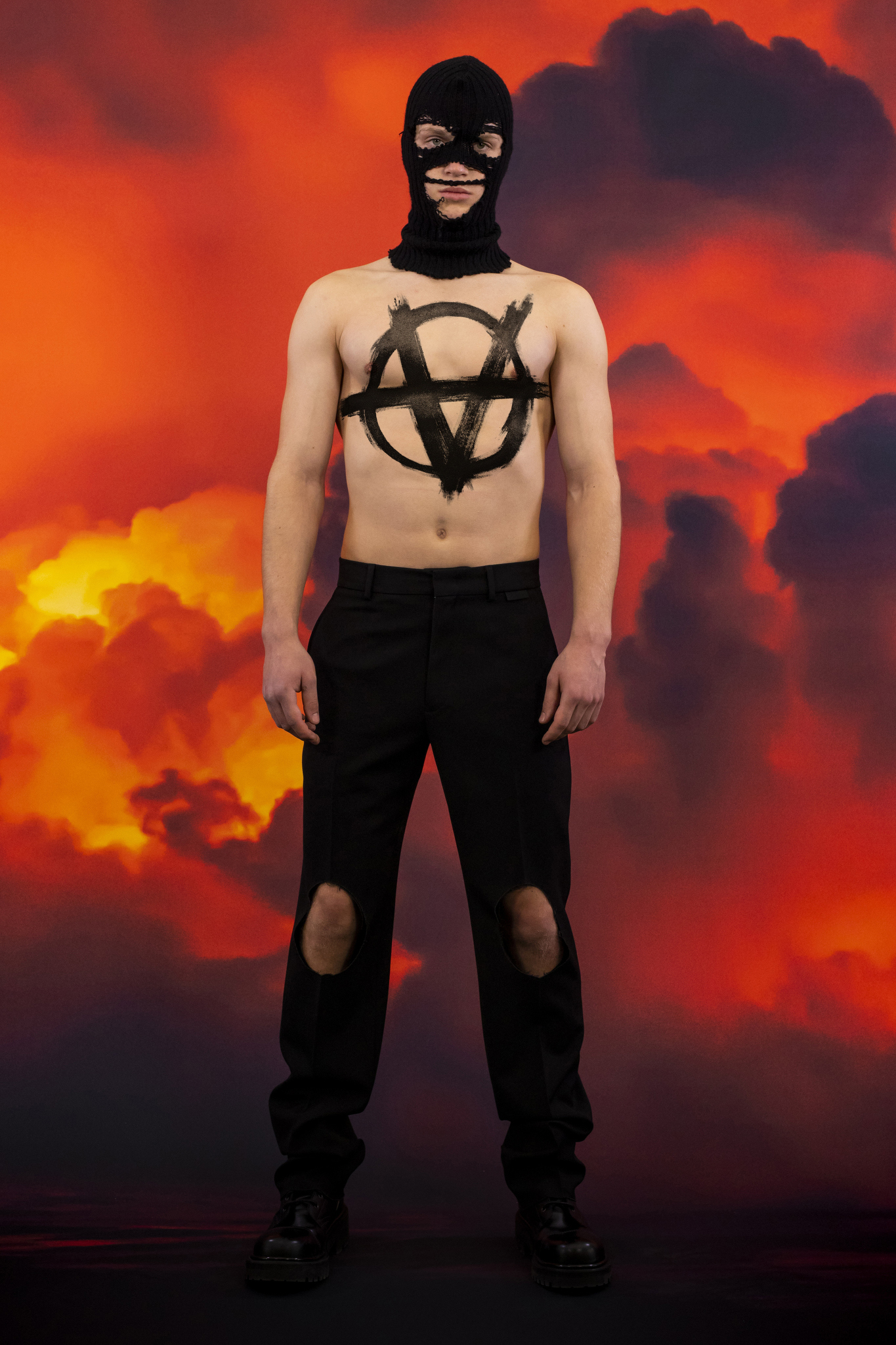 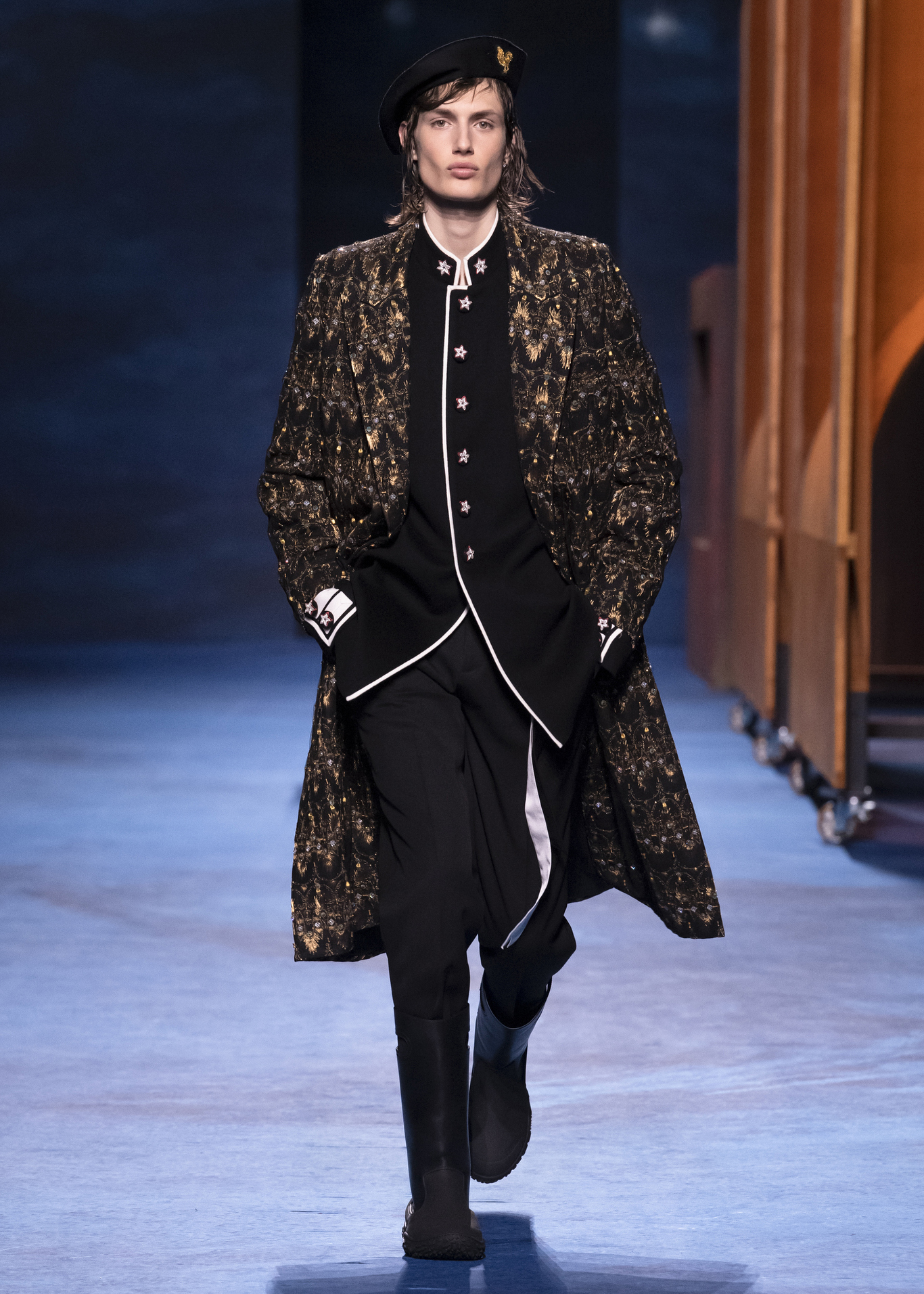 Look 1 is key in most runway shows. This black coat covered in a dense gold and rhinestone pattern required 1,200 hours of embroidery and was inspired by a Dior couture evening gown designed by Marc Bohan in the 1960s. Worn over a military-influenced, star-button suit, it was the most ornate of all. Perhaps not the most realistic look for the present day, but fabulous nonetheless. 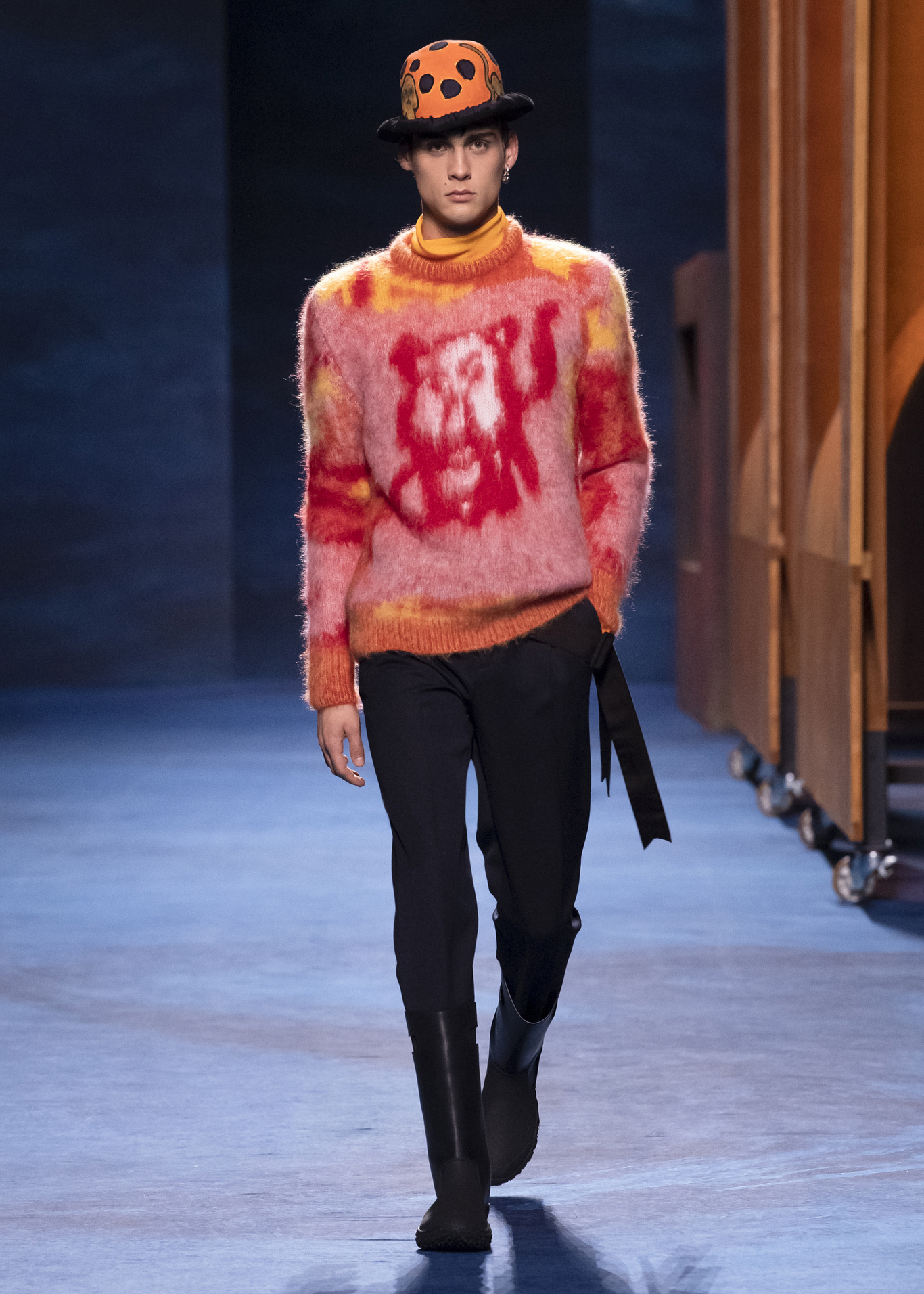 An example of a successful art collaboration, Look 18 features a lion, a theme in Peter Doig’s paintings, in the form of an eye-catching graphic embellishment on this rich brushed mohair sweater. Its painterly resemblance to the actual art piece is a testament to the house’s atelier artisanal know how. The boiler hat designed by Stephen Jones, Dior’s resident milliner, was hand painted by Doig himself and will be sold in small quantities to VIP clients. 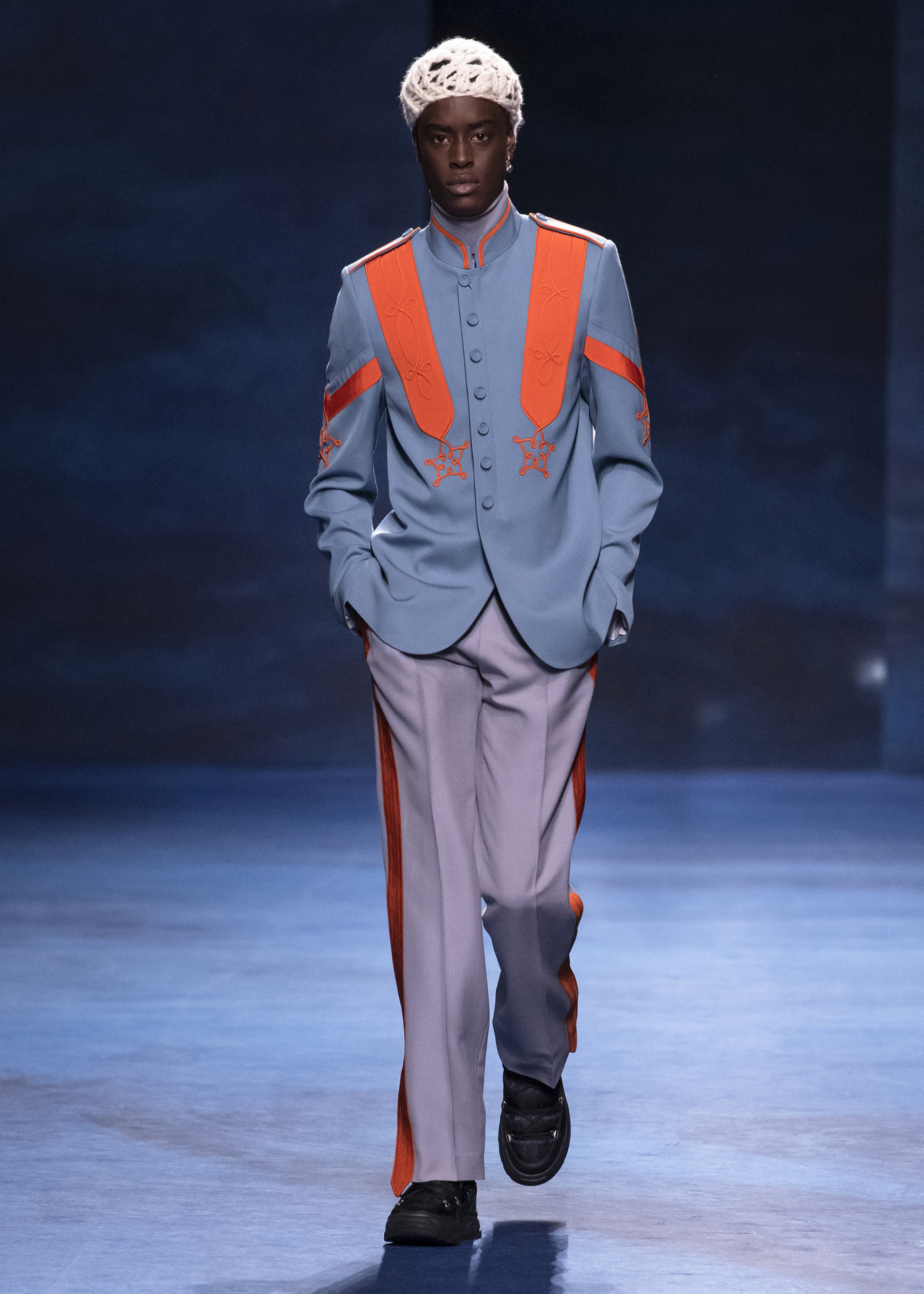 Jones’ obsession with military garments is no secret. Uniforms are a central theme of the collection — a reference to the designer’s graduate collection at London’s Central Saint Martins College of Art and Design in 2002. This ceremonial-yet-sophisticated take is also influenced by the designer’s research of the ceremonial tail-coated attire, which was the required dress code for artists when inducted into the Academie des Beaux-Art. Look 42 serves as the perfect example of Dior’s glam “army of fashion lovers.” 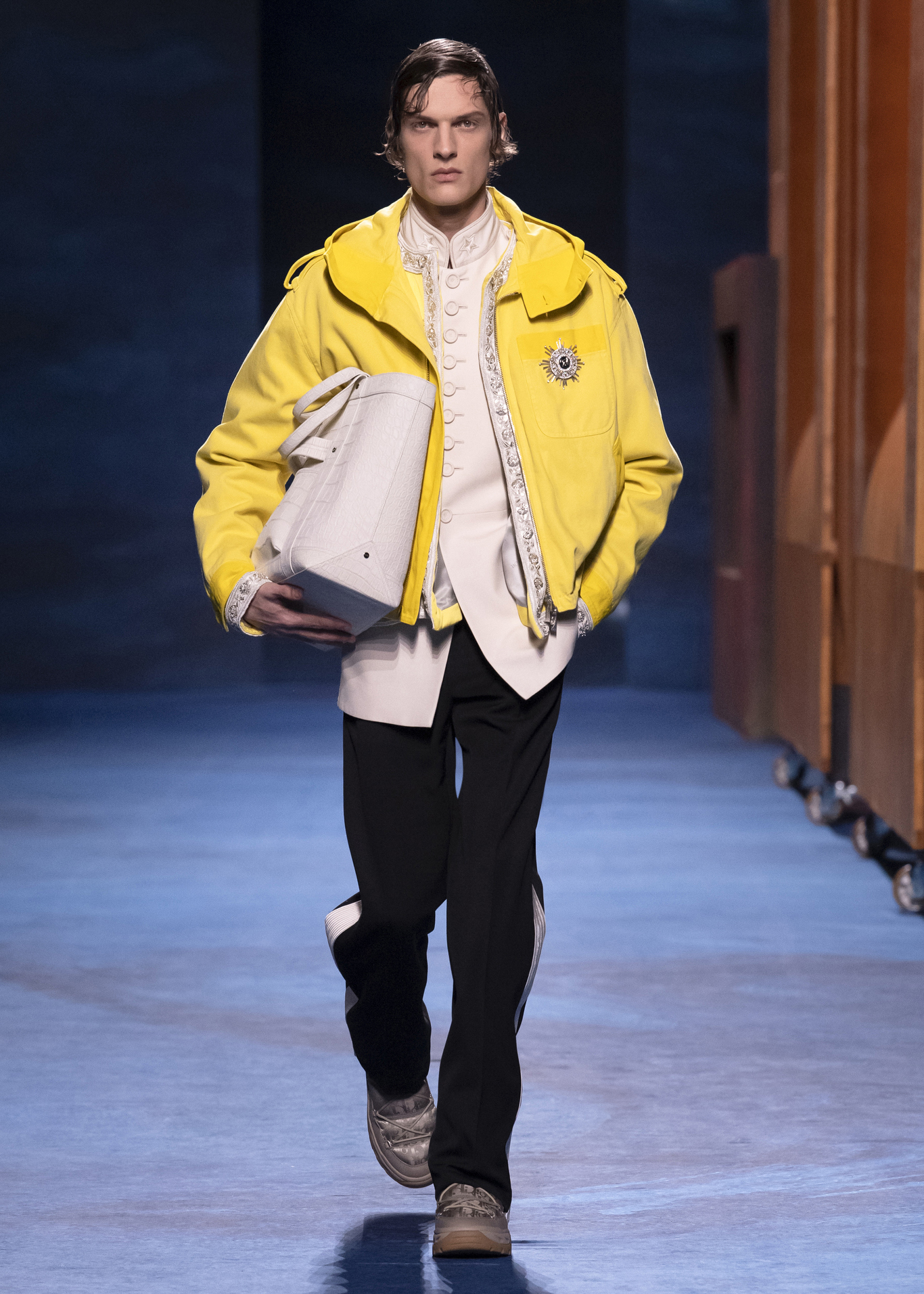 The color palette of the collection largely ranges from Dior gray to muted blues and browns — inspired by the painters work — but an infusion of vivid yellows and oranges pumps up a sense of energy and happiness. Look 13, a bright yellow cropped anorak with silver embroidery worn over an off-white admiral’s jackets and baggy military pants, gives a ‘90s vibe and lends a more commercial angle to the offering. 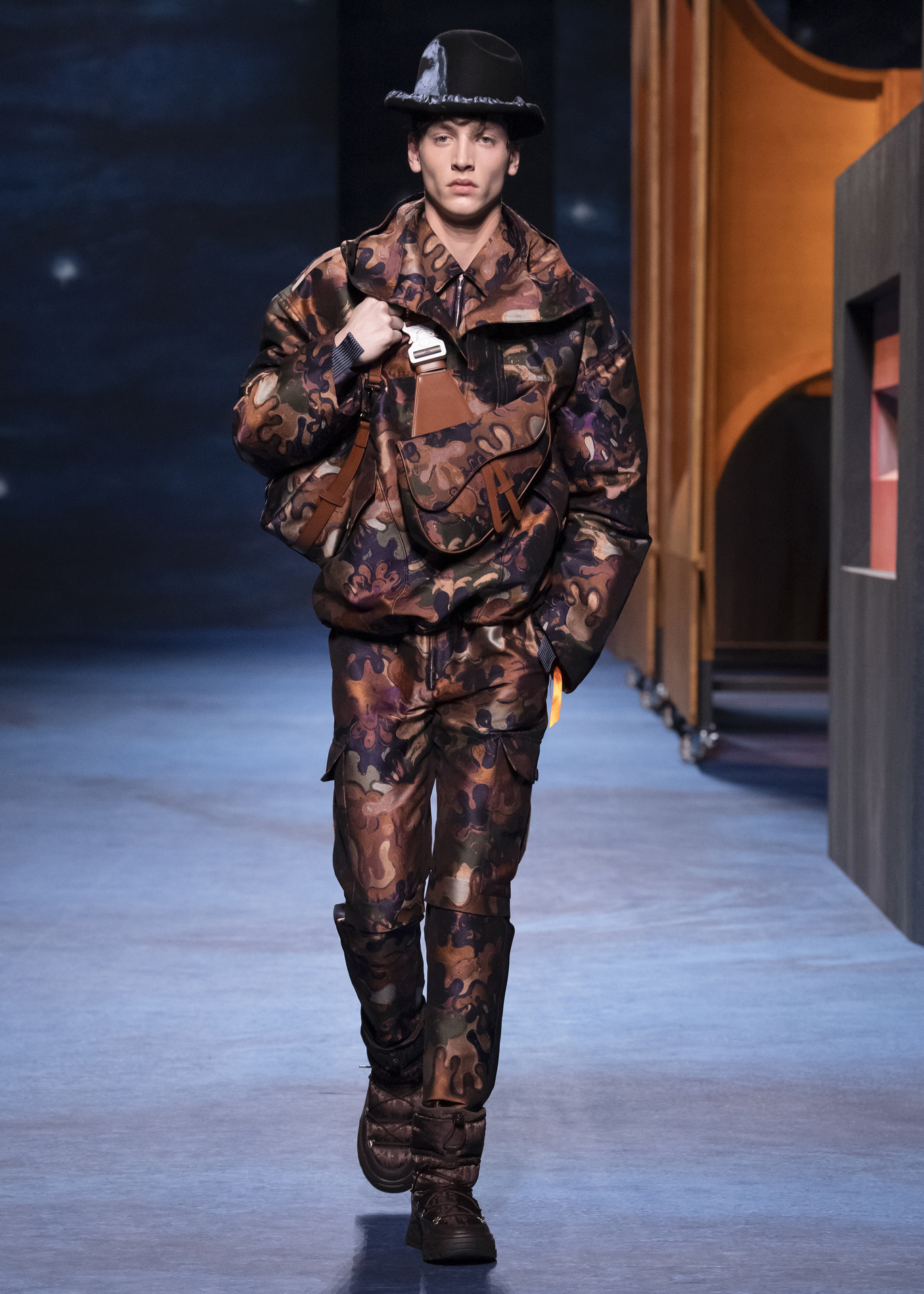 Doig’s art piece Moruga (2002-2008) was the starting point for the creative camouflage print featured on look 10. This elevated take on army fatigues is another important takeaway from the collection, and the use of this print on the new season’s Saddle bag is definitely a highlight that blends right in.