For Stylist Ade Samuel, Playfulness in Fashion is Key 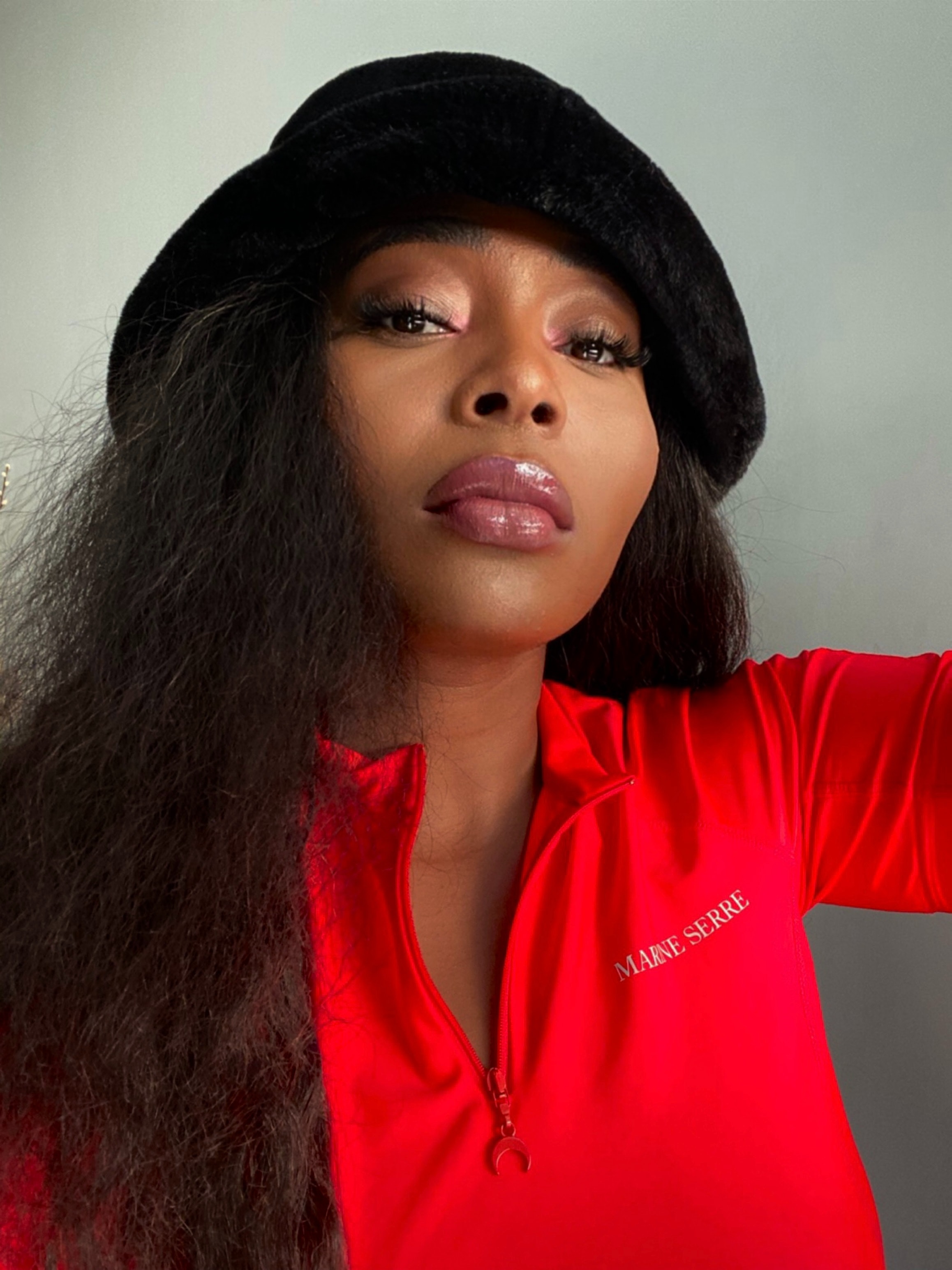 The stylist Ade Samuel has lived many lives within the fashion industry. Before styling the likes of Khalid, Yara Shahidi, Kelly Rowland, and working on the looks for Beyoncé’s Formation music video, the Bronx, New York native got her start as an assistant fashion editor at Teen Vogue, where she had the opportunity to work with styling heavy hitters like Heathermary Jackson and Alex White (and, prior to that, worked as a fashion intern at W magazine). “My New York mind-set was always to hustle, get in those doors, and soak in as much information as I could,” Samuel tells me over the phone. “People started to hear about me. I got a call from Kate Young’s assistant who wanted me to work with Nicole Richie. I did a gig with her in L.A. and she was like, ‘I want you to move out here.’” Richie then referred her to her friend, the stylist Simone Harouche, with whom Samuel ended up working on Christina Aguilera during her time on The Voice and Miley Cyrus in the middle of her “Wrecking Ball” era. (The 2013 VMAs, where Cyrus performed with Robin Thicke, Samuel remembers, was “insane.”) “I couldn’t turn down and Nicole Richie referral,” Samuel says, laughing.

The stylist’s latest client is the singer Khalid, whom she picked up during the pandemic—a time when her workload became more robust than ever. She’s recently linked up with the website hosting company Squarespace on a campaign called “Fashionably Late,” featuring two other top stylists, Erin Walsh and Nicole Chavez. (All three used the platform to upgrade their online curriculum vitae). Below, Samuel discusses her approach to dressing Khalid, the best lesson Kelly Rowland ever taught her, and why playing with fashion is her most important approach to being a stylist.

I’m curious about your work with Yara Shahidi—her style arc over the years has been interesting to watch. When did you first start styling her?

We met toward the end of 2015, and I started in 2016 with her. She was really green and trying to expand. We met during an Essence magazine shoot—the one with Johnetta Elzie, Teyonah Parris, and Yara, where Essence coined and put in print for the first time ever this thing called Black Girl Magic. Yara and I hit it off on set, and I remember her mom being like, “We would love for you to introduce her to the world of fashion.” I always like to build out an aesthetic for the artists I work with, so they can have fun and play.

As part of this new partnership with Squarespace, you said you are “taking control of your brand.” What does this mean in the scope of the pandemic?

Being a Virgo, I was so used to being busy. But the pandemic was an opportunity to take a moment to be like, oh my gosh, the world stopped. But I personally didn’t stop. I was transitioning into where I’m going now, which is film—I’ve been doing a lot of filmmaking. I wanted to highlight and show the gradual growth of my career and progression as a stylist. And with my website, I wanted to find a home where I could showcase my work and create my own universe around my work.

It sounds like you were very busy during the pandemic. What sorts of gigs were you working?

I started working with Khalid—I acquired him as a new client during that time, which kept me busy. I also did a lot of on-camera moderation and group panels. During the pandemic, we also saw a heightened awareness with equality, especially among Black people and people of color. So with that, I was a part of a lot of panels where we talked about the changes that were needed.

What is on the mood board for Khalid’s style? In which direction did you want to take him, fashion-wise?

For Khalid, it was really important to continue to play with his fashion. When I take on a client, I always think about what their organic style is, and how can I amplify that. With Khalid specifically, I liked that he was someone who liked to play—he was really adventurous with his aesthetic and silhouettes. I find that to be what drives me in doing menswear. When I worked with clients like Michael B. Jordan, Big Sean, and Daniel Kaluuya—all of these men came in with their different aesthetics. Khalid’s mood board referenced where he was from, which is Texas, but he has this interest in streetwear, too, with a clean, modern twist. I’m using all these words, and they kind of sound cheesy but we really do play a lot—specifically with color.

When did you know you wanted to be a stylist?

I always had a fantasy of playing with clothes and creating clothing. I love textures and prints and patterns; that comes from my parents being African and having that influence, the Nigerian influence.

Let’s get into the Style Notes questions. What is the best fashion tip that you’ve picked up on set?

Always have double-stick tape. I find that on set, sometimes you have to do quick maneuvers and adjustments, even changing the entire garment. It’s so helpful to have a good, simplified kit that always has pins and double-stick tape.

What do you personally keep in your kit? What are some must-have items besides the double-stick tape and pins?

I have under-arm sweat gear, specifically for the men. A needle and thread is obviously super important—you’d be surprised how many people don’t even have that in their kit. I also actually like to keep wig tape. Double-stick tape is a lighter adhesive that will, over time, come off. Wig tape is much sturdier—and it’s a trick I picked up while working with Kelly Rowland. I learned a lot of hacks working with her—she taught me about having colored socks for different skin tones, and adding socks to clothing to give volume or take up space. If a shoe was too big, you could stuff a sock in there. Or a sock could be added to a jacket or blazer to give it life, or fake padding. She had so many of these little quick fixes that I called “Destiny’s Child Hacks.”

Do you remember any other Destiny’s Child Hacks? The sock thing is great.

I remember one story that Kelly told me. She used to do this kind of DIY thing when it came to dyeing her tights. Back in the day, she used to use teabags and coffee grounds when she was on tour and her stockings were ripping, and she needed to create a color that matched her skin tone. You can use coffee grounds and hot water and let it soak. Now, we have so many different, brands that make tights for our skin tones. But to know that hack [in the 90s and 2000s] was amazing.

Who is your ultimate style icon?

I would say Patti Wilson. Her eye, her being, how she dresses—she is someone who I’m really inspired by.

What is your go-to outfit for a day off?

I love a good jumpsuit—a wide jumpsuit. I’ve been obsessed with this Issey Miyake men’s jumpsuit that I bought that wasn’t even crazy priced. It’s a contractor’s pleated jumper. I throw it on anywhere. I like things that are loose and casual.

Describe your style in three words

My style as a teenager was quirky and adventurous. My parents always said they knew I would work in fashion because I would really play with my outfit. I definitely played around during the Spice Girls era. And when Clueless came out, I was definitely that girl who wanted to add layers and layers of accessories. I was really adventurous with my hairstyles. Kelis was such a big inspiration to me, especially living in New York. I had a pixie cut, like Nia Long vibes, and I dyed my pixie cut blonde. I had shaved sides. There was no limit to the fun I was having.

Do you remember your first major fashion purchase?

It was my pair of Saint Laurent Tribtoo pumps. That was a high heel I bought from Barneys, a birthday gift to myself for my 21st. I’ve kept those shoes in my closet all these years, even though I wouldn’t wear them today.

What is the most prized possession in your closet?

Who I am as a person, there’s no single prized possession—because my clothes are all tangible beings in my closet. Even though I’m a stylist, I don’t put too much value on possessions and things, mentally and spiritually[-speaking]. But when I look at these specific YSL shoes, they remind me of that time when I was just a girl from the Bronx, not thinking that I could even afford YSL, not wanting to conform, hoping all my hard work meant something. When I bought those shoes, I was suddenly that young girl who was like, Wow, you can do that. You can afford that. And the progression of my life since then has been really amazing to watch. It brings me back that memory and that joy.