IMAGINE waking up to a bill of £28,000 from Amazon and it's entirely on Lego – that was almost the reality for one panicked mum after her toddler got a little carried away with an online shop.

Mum Laura Taylor revealed that her son had some how got their hands on her Amazon account and happily added not one, but 623 boxes of Lego to her basket. 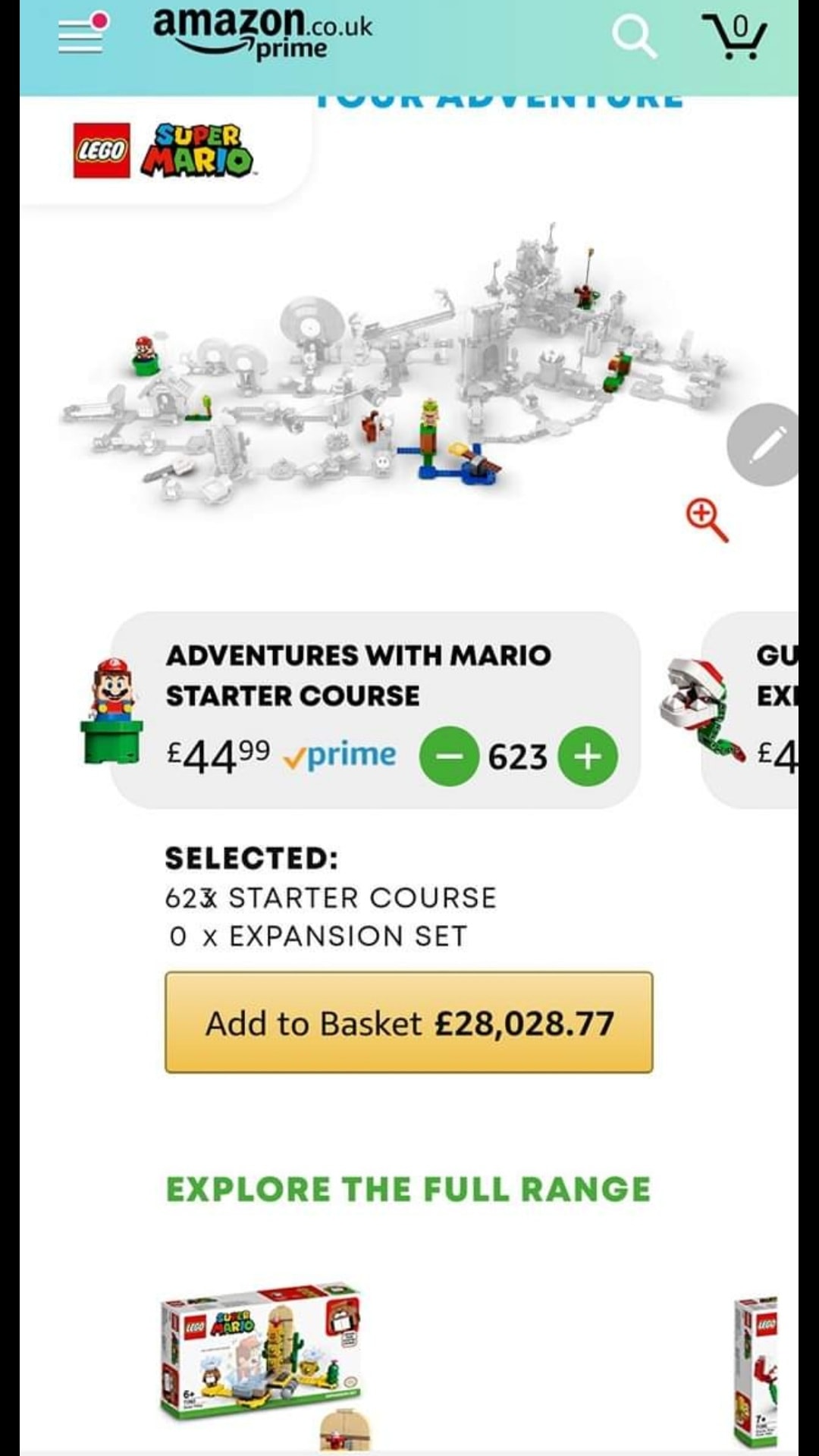 Desperate to get their hands on an Adventures with Mario Starter Course box of Lego, her little one tried to buy as many as they could.

The boxes cost £44.99 a piece, meaning mum Laura was faced with a terrifying bill of £28,028.77 in total, after her son had sneaked hundred of boxes into her basket.

Luckily, she clocked on just in the nick of time – noticing the basket was looking pretty full and stopped the order from going ahead.

Laura shared evidence of her son's almost-genius plan on Facebook group Family Lockdown Tips and Ideas and fellow mums were left in hysterics. 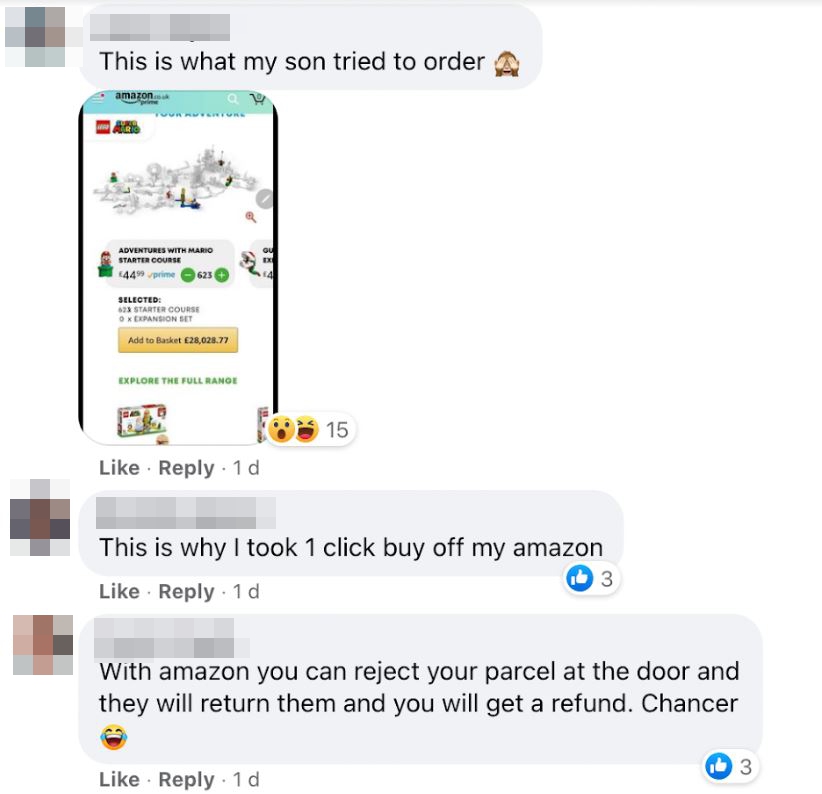 "This is why I took one click buy off my Amazon," said one mum.

Another who sounded like they were speaking from experience, added: "You need to change the password and stop automatic ordering!!"

A third wrote: "With amazon you can reject your parcel at the door and they will return them and you will get a refund. Chancer."

Laura wasn't alone as plenty more mums revealed they too had kids trying their luck with their online shopping accounts – and for some, they were left footing the bill. 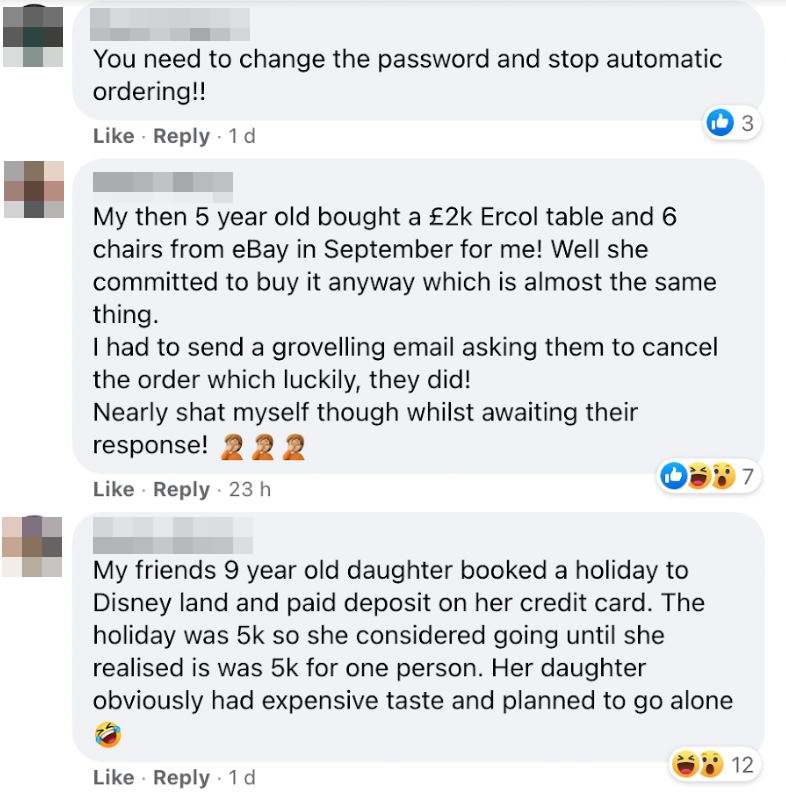 Another shared: "My then 5 year old bought a £2k Ercol table and 6 chairs from eBay in September for me! Well she committed to buy it anyway which is almost the same thing. I had to send a grovelling email asking them to cancel the order which luckily, they did! Nearly sh*t myself though whilst awaiting their response!"

And the expenses just kept on going up, as one woman revealed: "My friend's 9 year old daughter booked a holiday to Disney land and paid deposit on her credit card. The holiday was 5k so she considered going until she realised [it] was 5k for one person. Her daughter obviously had expensive taste and planned to go alone."

Meanwhile, one mean mum came under fire for turning her daughter's room into a mini jail to punish her for not tidying.

Plus, another mum's incredible baby bathing hack will change the game for bath time and help with any "accidents" in the tub.

And savvy shoppers are obsessed with this kids Tipi bookcase dupe from Aldi that is £45 cheaper than the original.