RIVER ISLAND has been blasted by parents for selling "sexy" tight leather trousers for children as young as FIVE – but others reckon there's nothing wrong with them.

The retailer was accused by some cautious mums of "sexualising children" after the range of black leatherette trousers was spotted on display in the kids' section of the store. 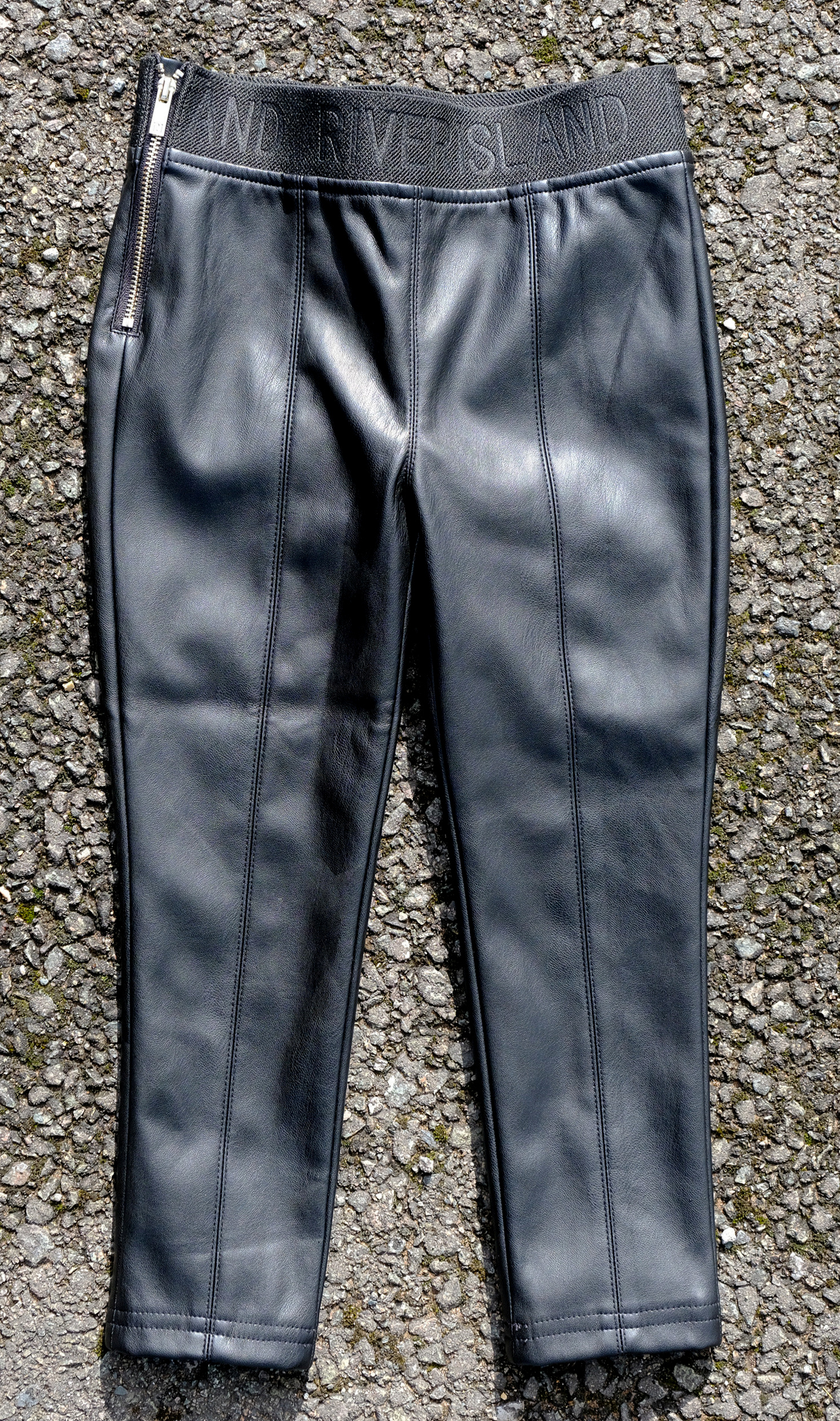 Angry mums have deemed the clothing "highly inappropriate" and accused River Island of "stripping the innocence away from kids."

Some have now demanded River Island pull them from stock after one grandmother brought the matter to light while shopping with her daughter in Worcester.

Helen Richards, 60, had been browsing the aisles for an outfit for her nine-year-old granddaughter when she noticed the trousers on display.

Ms Richards, of Worcester, said: "Why are they sexualising children? Why do they feel the need to put leather trousers for parents to buy for their child? 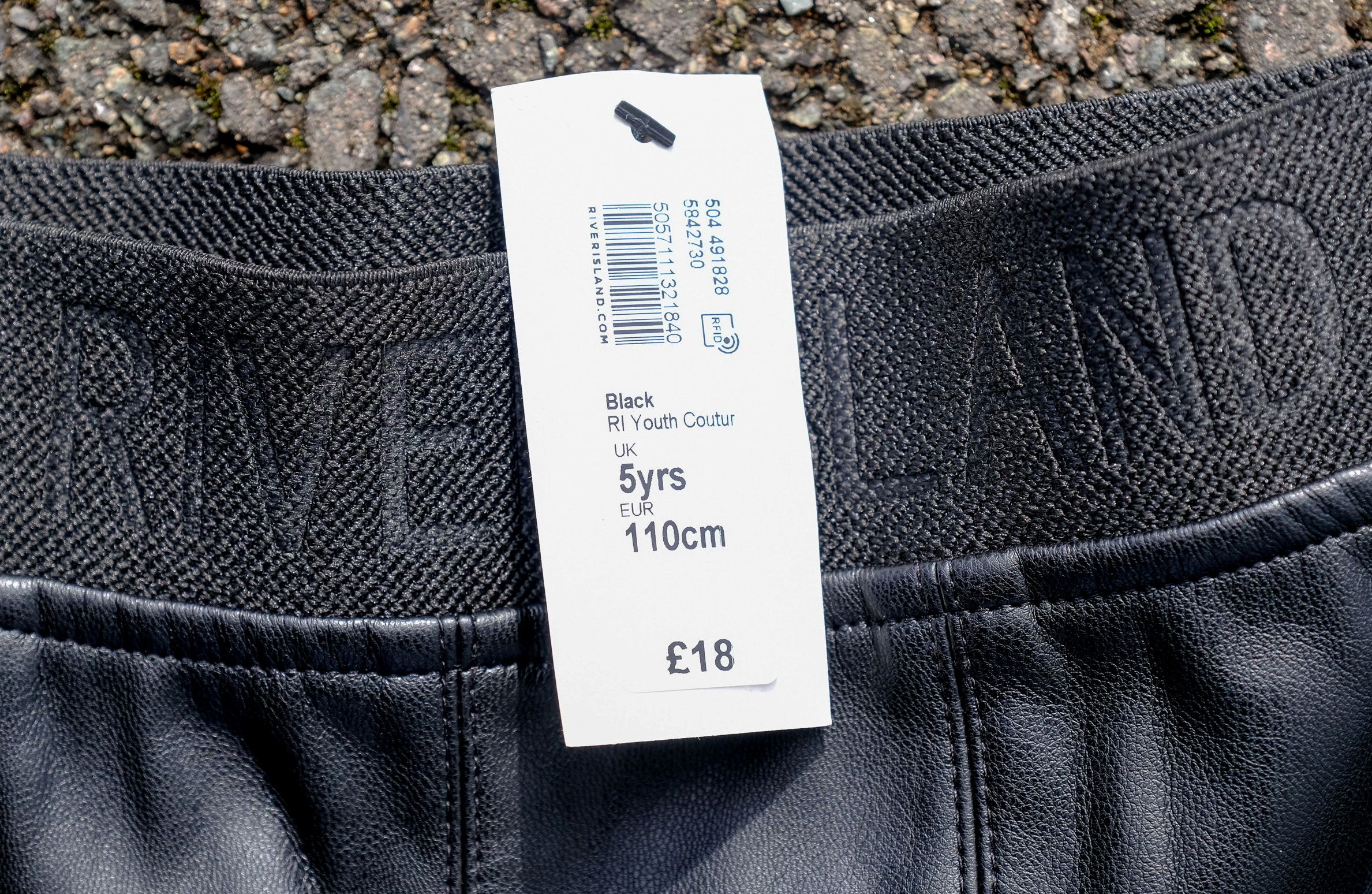 "It's so wrong, especially in this day and age. We shouldn't encourage our children to dress like that.

"There's more than one way to take away a child's innocence. I am so angry."

The gran-of-seven said the £12.99 leatherette trousers were available to buy from aged five to age 12 Ms Richards, who was shopping with her 33-year-old daughter Alison, added: "It was the first time I have been shopping in months.

"I was shopping with my daughter who was looking for an outfit for her daughter.

"She pointed at these trousers, and I was so shocked. I am usually the one who mentions this sort of thing."

Ms Richards said she was particularly concerned because of recent fears about a kidnap gang approaching children in Worcester. 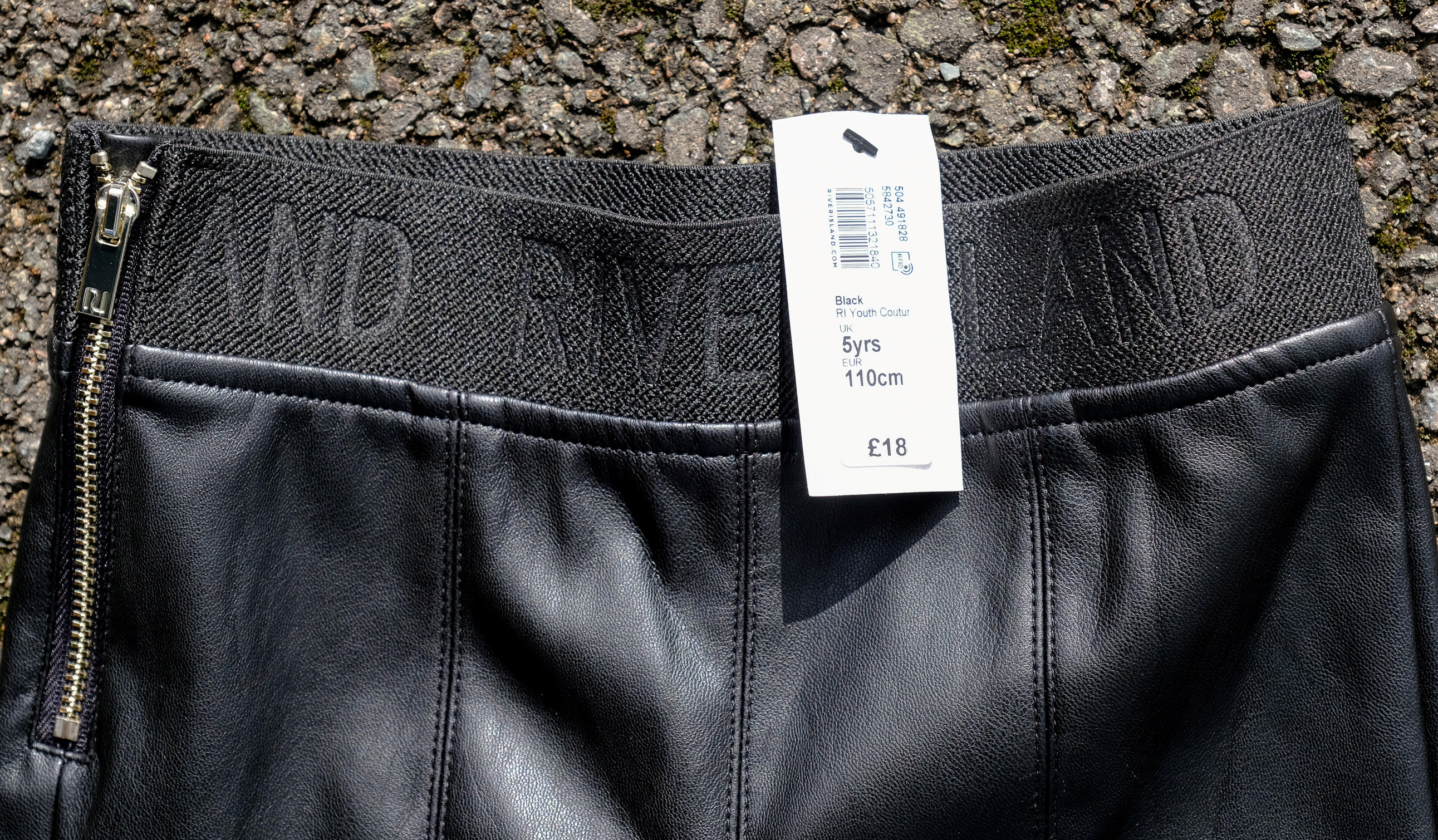 She said: "That sort of thing makes me think speak out. There are other options of clothes for children to wear.

"I was tempted to say something to the staff but it's not their fault.

"I think River Island should remove the clothing from their store immediately. I'm also worried the clothes might attract unwanted attention.

"Young people can't deal with that and it can take away their childhood."

Other mums and dads flocked to social media with some urging parents to boycott the store. 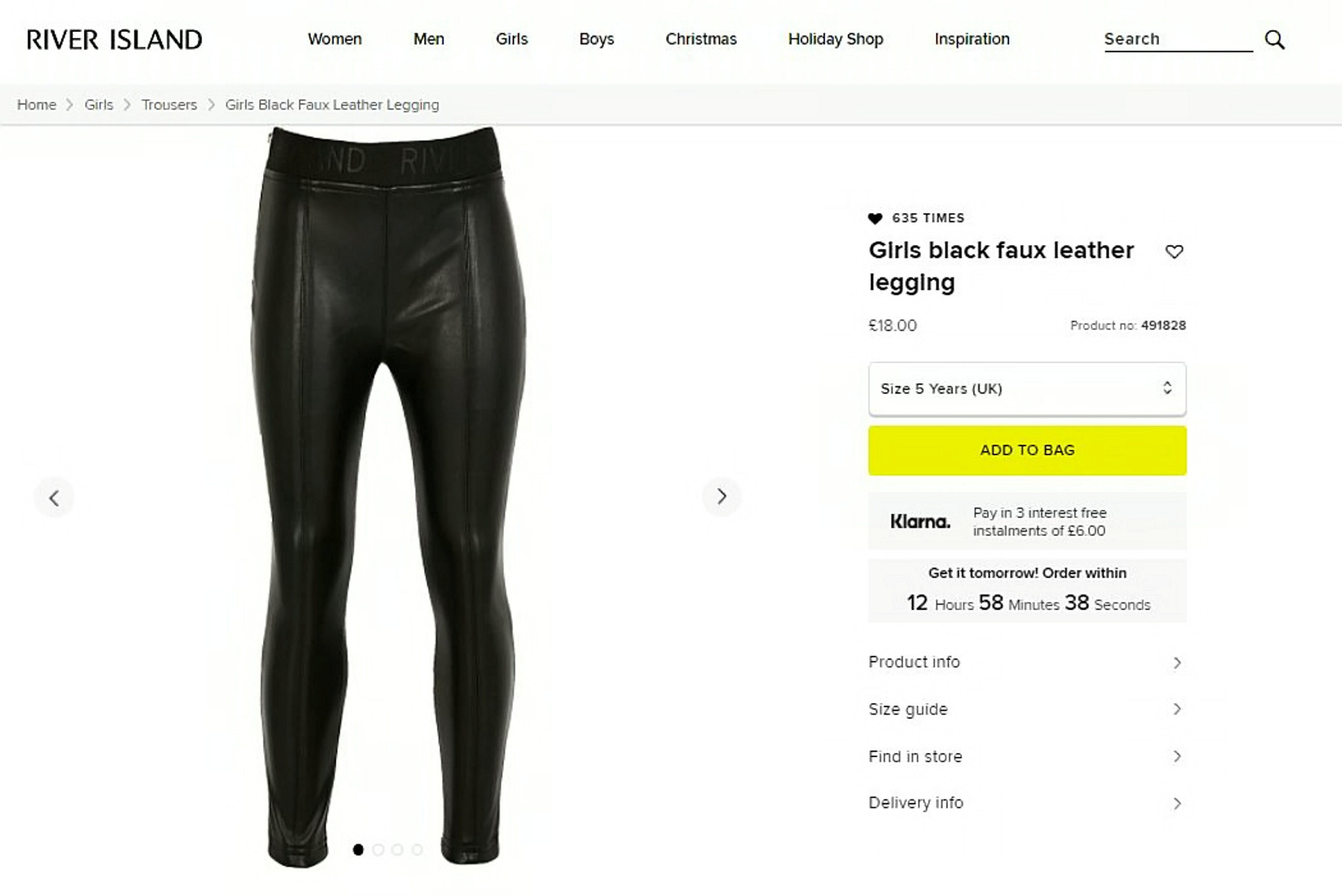 Sally Wright wrote on Facebook: "Who would want their children walking around like Kim Kardashian in leather pants? We should boycott the place until they are removed."

Carlie Brown added: "This is highly inappropriate and another example of our kids innocence being stripped away. Shame on River Island."

Terri Hopcroft put: "I'm all for children's fashion but please let kids be kids. Wouldn't dream of letting my 2yo daughter run around in tight fitting trousers."

Ally Moore said: "Personally, I like to see children dressed like children. Pvc leggings on a little girl… a bit much."

Others leapt to the defence of the store with Nicola Long saying: "What's worrying is how adults are pushing their idea on everything being sexually motivation.

"It's a pair of trousers, how you see them says more about you." 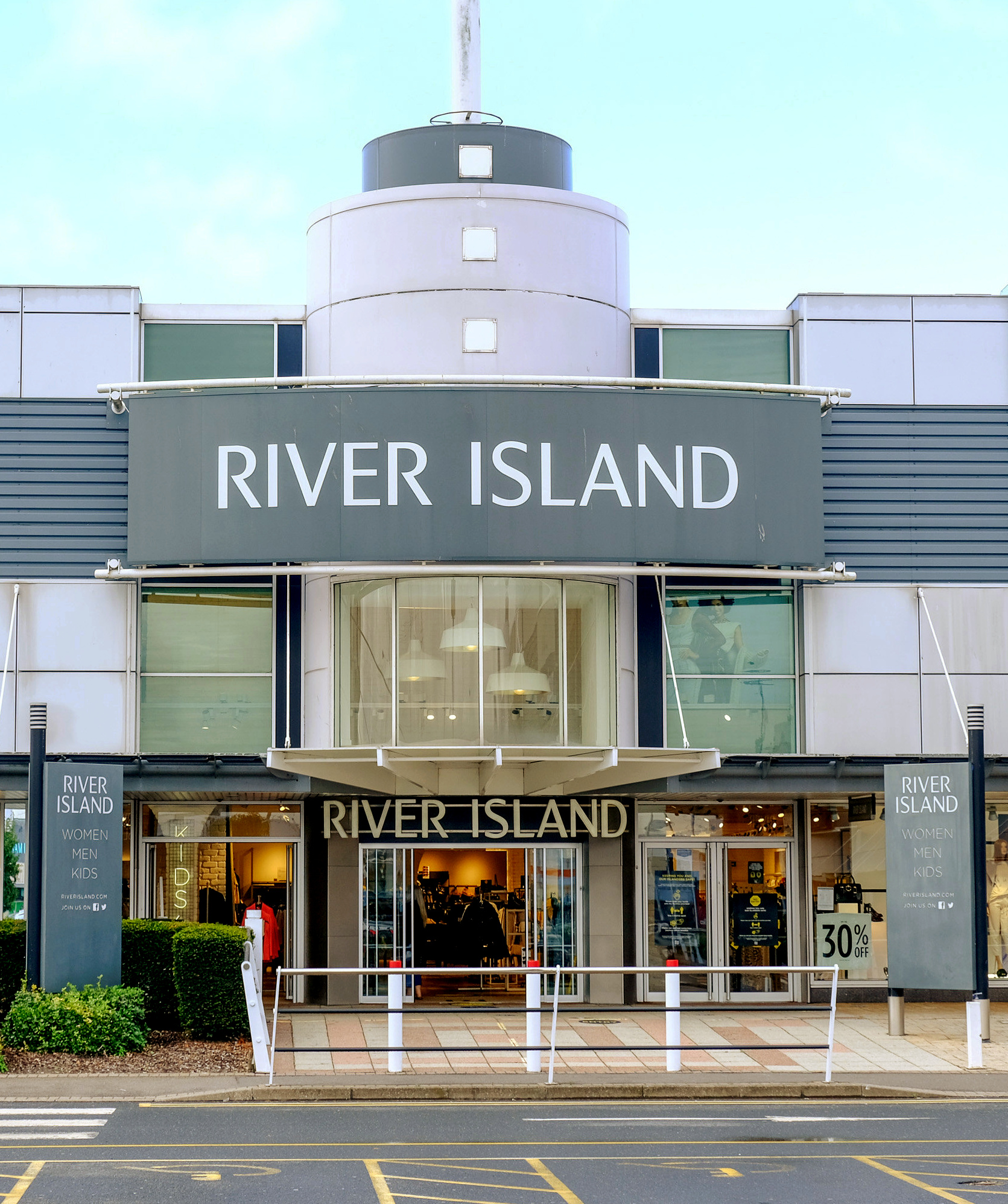 Jade Charlotte commented: "No need to get angry, just don't buy them. If everyone thinks they're tasteless and doesnt buy them, then they'll stop making them.

"I dont particularly like them as I dont think it's a good look for most adults either. But I cant make that decision for other people!

"Basically, worry about what your own children are wearing, not other peoples."

In other parenting news, a mum was left red-faced after accidentally ordering a VERY cheeky French Peppa Pig plate for her toddler.

And as we told you previously, this mum who was told twice that she was having a girl gave birth to a baby boy.

Elsewhere, a super organised mum spends hours making baby packs to speed up nappy changes and others reckon she’s on to something.