A GRIEVING mum has thanked the kind stranger who handed her a heartwarming note on the family's first trip since losing her daughter.

Posting on her TikTok page A Dream for an Insomniac, American mum Lindsay Mains explained how her youngest daughter Luna was diagnosed with blood cancer and tragically passed away in July. 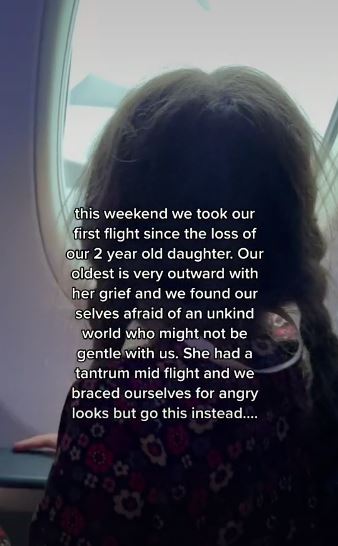 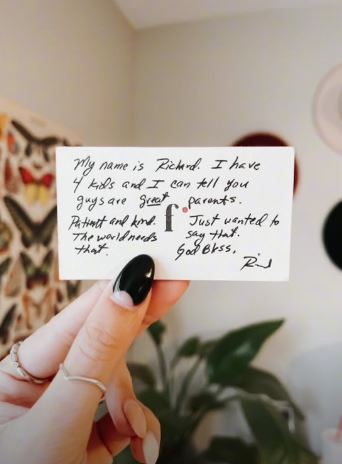 Earlier this week, Lindsay, her husband and their daughter Olive went to visit family following their unimaginable loss.

In a viral video, the mum explained: "This weekend, we took our first flight since the loss of our two-year-old daughter.

"Our oldest is very outward with her grief and we found ourselves afraid of the unkind world who might not be gentle with us."

Halfway through the flight, Olive had a tantrum – so the parents naturally braced themselves for angry looks and rude comments from other passengers.

But instead, Lindsay was handed a handwritten note from a father who praised their parenting – and unsurprisingly, the sweet message reduced the grieving mum to tears.

The note read: "My name is Richard. I have four kids and I can tell you guys are great parents.

"Patient and kind, the world needs that. Just wanted to say that. God Bless."

In a separate video, Lindsay explained: "Sometimes you need to be reminded of the goodness in the world.

"We got on the plane full of heaviness knowing we were going to our home away from home but we weren’t able to bring our youngest daughter with us.

"We knew tantrums were inevitable but have been trying to support our oldest in learning tools to handle her big feelings and grief.

"This means tantrums can last for some time while she works through all of those big feelings.

Urging other people not to be so quick to judge, the mum added: "Be a Richard in a world of Karens… reach across the aisle and remember that you never know what people are going through."

Since returning from the trip, Lindsay has tried to track Richard down on social media and has been blown away by the response to her video – which has been viewed by over a million people.

One replied: "Just goes to show, you never know what everyone is going through and a little kindness and understanding goes a long way."

Another added: "What a kind man. See there are still kind people.

"He actually took the time to write that, for no other reason than to be nice."

Meanwhile, a third said: "Imagine if we all made an effort to make a kind gesture like this everyday."

For more real life stories, these parents were slammed for nicking a WHOLE bucket of Halloween sweets while trick or treating with their kids.

And this mum was mortified after realising she’s accidentally named all FIVE of her kids after different drugs.

Plus parents slammed this mum who pranked her son with a scary maze game and it absolutely terrified him.