A JEALOUS girlfriend demanded a woman removed an "inappropriate" review of her waiter boyfriend from Yelp.

The woman, named Antonia, took to TikTok to share the bizarre story about what happened in the restaurant. 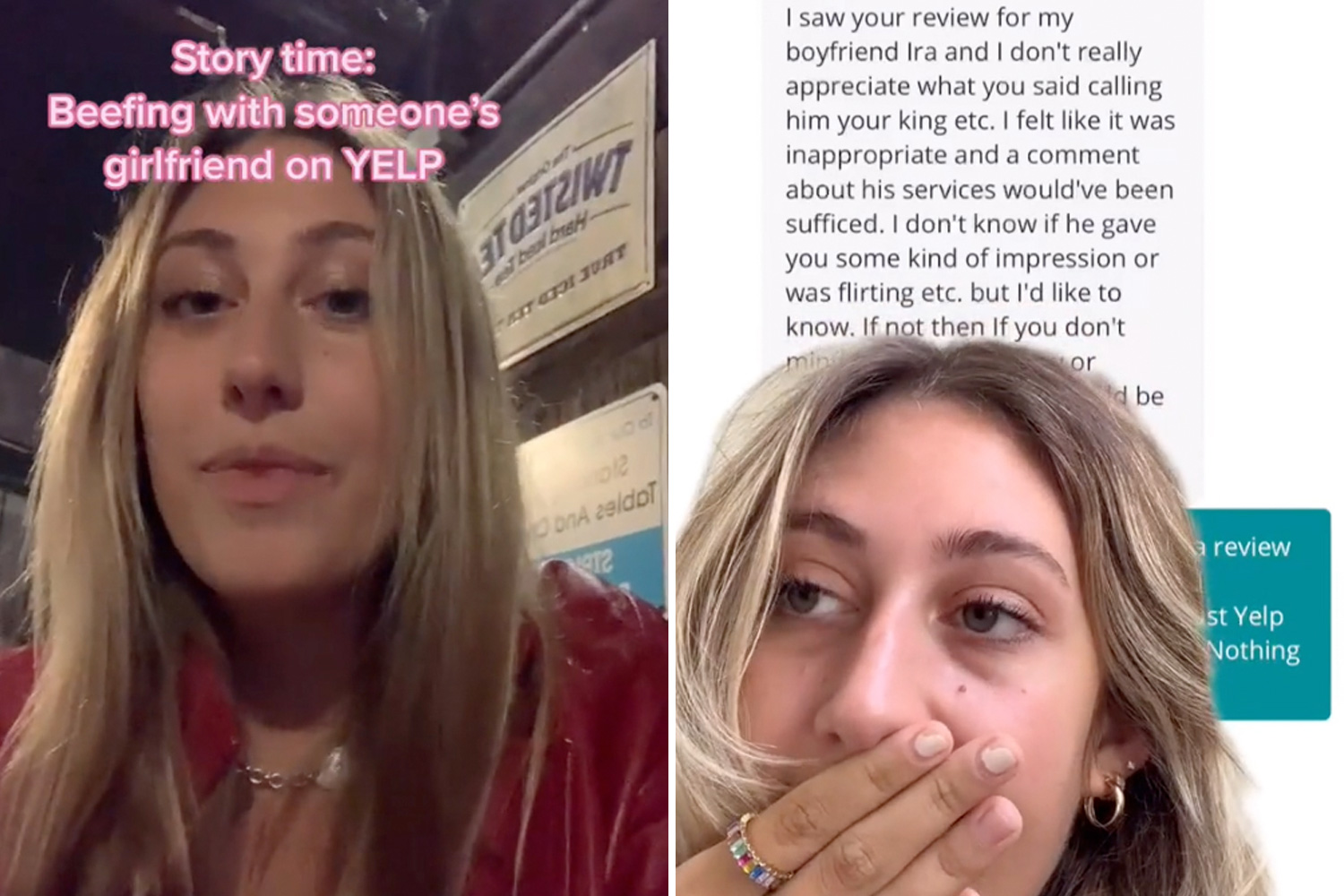 Antonia explains that the waiter in question had asked her and her friends to leave him a review with his name in it, and so she did.

She says that she left a jokey review, but that no more than 20 minutes after she posted the review to Yelp – she got a reply from a girl on Yelp.

The response from Ira’s supposed girlfriend pops up next, and Antonia can’t help but stifle a giggle at the reply. 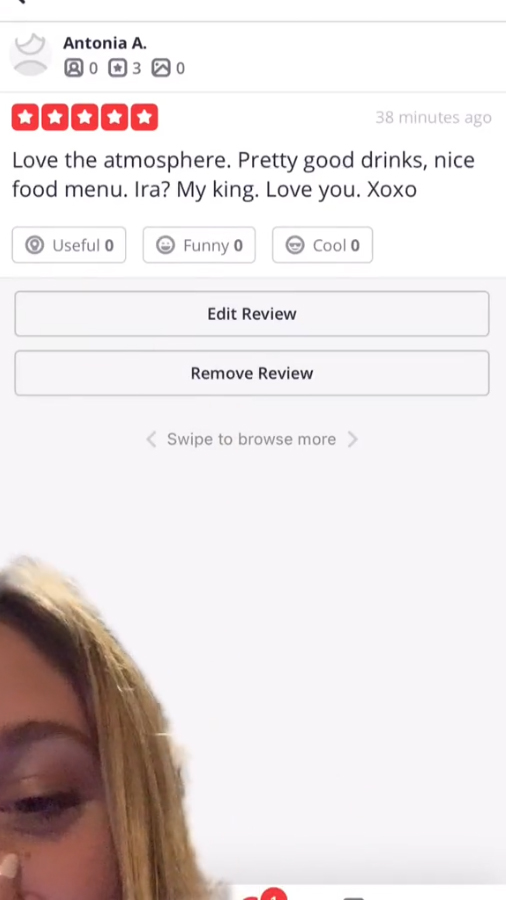 The reply reads: “I saw you leave a review for my boyfriend Ira and I don’t really appreciate what you said calling him your king etc.”

Antonia has to hide her faces as she tries not to laugh harder and says: “Take a second.”

The girl’s response continued: “I felt like it was inappropriate and a comment about his services would’ve sufficed.

“I don’t know if he gave you some kind of impression or was flirting etc, but I’d like to know.

“If not then if you don’t mind editing the review or writing a new one that would be great. Thanks.” 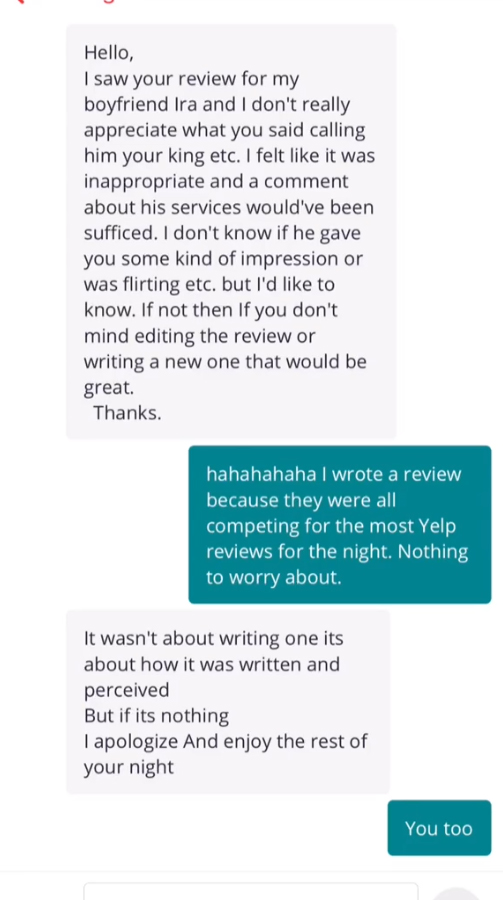 As the girlfriend got the complete wrong end of the stick, Antonia replied to her to set the record straight.

Antonia said: “Hahahahah I wrote a review because they were all competing for the most Yelp reviews for the night. Nothing to worry about.”

Antonia speaks over the video and says: “I didn’t wanna be like ‘you’re f***ing crazy’ but…”

Both Antonia and her friends clearly can’t get their heads around the girl’s response.

She finishes the video, saying: “Imagine going on Yelp to look at your boyfriend’s restaurant and messaging someone from a review… within 20 minutes.” 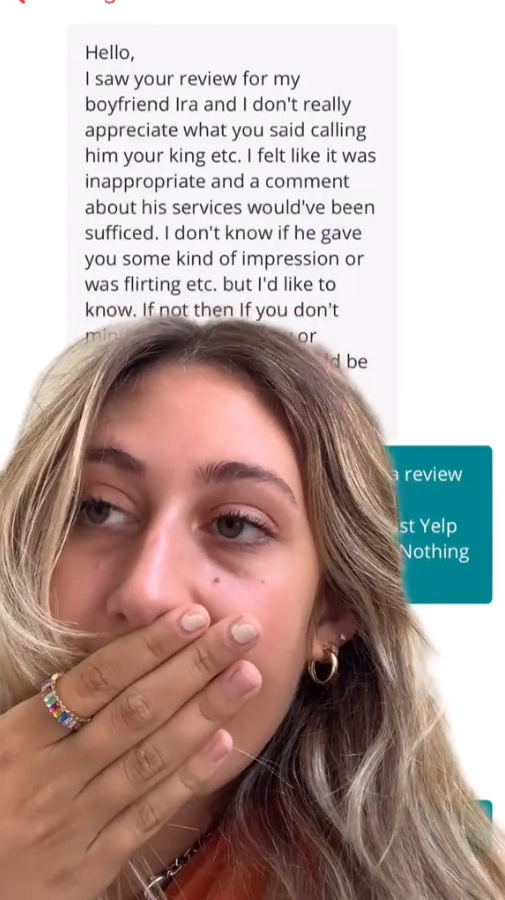 People flooded into the comments to share their thoughts on the matter.

One person commented: “Ira is probably at home fighting for his life right now.”

However, one viewer raised a valid point – how did the girlfriend know about the review in the first place.

They commented: “TWENTY MINUTES LATER?! Does she get alerts for Yelp reviews at the restaurant he works at or something”.

Maybe Antonia isn’t the first girl to receive a message about an Ira review?

Read about this how this TikTok influencer claims to track down her followers' cheating boyfriends and gets revenge on them.

Plus, how actor Matthew Perry was caught talking to a 19-year-old on a dating app.

And how this woman claims she caught her man cheating after spotting his FINGER in another woman's snap.